Koei Tecmo’s Dead or Alive 6 has been notorious for its microtransactions. That notoriety had reach critical mass with their infamous hair colour choices. For the uninitiated, A) you are better off that way, and B) the whole Dead or Alive 6 hair colour controversy involved players having to use their premium currency to change a character’s hair colour. The worst part was that it cost additional Premium Tickets to revert their hair to the colour even after purchasing it. Shortly after, Koei Tecmo responded to the deserved outrage and began formulating a plan to resolve it. Yesterday, they announced their solution. 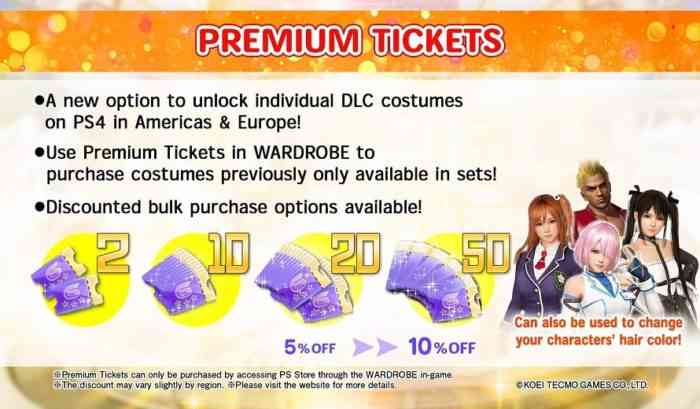 Good news, bad news. The good news is that players will be refunded their Premium Tickets they spent on hair colours prior to the new update they just pushed out. The bad news is that future hair colour purchases will still cost these Premium Tickets; Koei Tecmo gotta get their money somehow. New policies have been put in place for these purchase though. The new rules are that buying new hair colours for a character’s hair style will still cost players Premium Tickets, but all colours will be permanently unlocked for said hair style. Colours can be changed whenever the player chooses. Just as these prior purchases will be refunded, they will also be reset, so if you had the colours you wanted, you will need to purchase them again with your refunded Tickets.

Fans still have not really forgiven Koei Tecmo for their initial misstep. They are still upset, but in a non-all caps lock sort of way. Dead or Alive 6 is available now on PC, PS4, and Xbox One.

Do you think Koei Tecmo should do more to earn their fans’ trust back? Let us know in the comments below.


Nioh 2 DLC Is Out Now – The Tengu’s Disciple

Activision Blizzard Made Close to $1 Billion This Fiscal Quarter Thanks to Microtransaction
Next
CD Projekt Red Donates $977, 000 to COVID-19 Relief
Previous
Wizards of the Coast Employees Working From Home