Cuphead fan and artist Davy Productions has released a stop-motion animation in honor of the Studio MDHR indie title. The animation follows Cuphead and Mugman, the titular hero of the 2D platforming run and gun and his trusty sidekick. The animation is called “Cuphead and Mugman in Chaotic Casino” and it features familiar characters and the grainy film style of the game. It took Davy Productions four months to put the episode together and it was quickly recognized by Studio MDHR. Cuphead is available on Xbox One, Nintendo Switch and PC now and an official animated series is coming to Netflix soon. 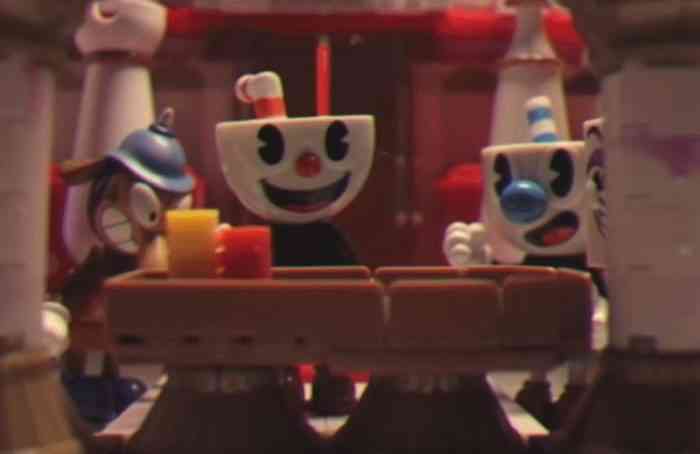 Davy Productions utilized McFarlane Toys’ Cuphead construction sets as models for the stop-motion animation which gives the episode a authentic look. Some of the action scenes in the animation are recreations of encounters in the game and any Cuphead fan should recognize them. The most Cuphead-like feature of the animation is the oldschool grainy film style filter that adds a nostalgic feeling to the game and animation respectively. The Devil’s Casino acts as the primary set piece in this stop-motion animation and there are several boss encounters, including the first and the final ones.

One of the recent updates to Super Smash Bros. Ultimate added Cuphead as a Mii costume and the game’s Floral Fury as a playable track. The final expansion for Cuphead, The Delicious Last Course will be releasing later this year, adding a new island, new charms, weapons, bosses and the new playable character, Ms. Chalice to the game. The Netflix series will likely follow the events of the game even more closely than Davy Productions’ stop-motion animation but his episode makes us even more excited for the official show.

What do you think of Davy Productions animation? Are you excited for the Netflix series? Let us know in the comments below!