It might just be time to accept that For Honor is here to stay. I keep thinking, “Wow, For Honor is still coming out with content?” and month after month, it keeps sticking around. This month is pretty special for the team behind the game. February 14th will be the third anniversary of For Honor, because when you think of that day, you think of legendary fighters brutally killing each other. Yesterday, For Honor Year 4 kicked off and a roadmap for this month’s content was released as well. 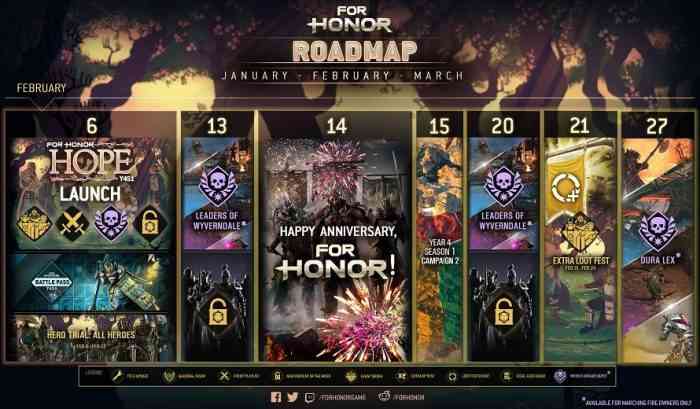 Season 1 of Year 4 is called Hope. What a wholesome name for something so violent. The roadmap for this month shows us exactly what is being planned, down to the day. Starting yesterday, the brand new Battle Pass for this Season began selling. It also marked the start of a one week trail of the new heroes. This ends on February 13th. Also on February 13th, 20th, and 27th, new weekly arcade quests for Marching Fire owners begin. The next day is For Honor’s third anniversary. Nothing specific has been mentioned for it, but it is taking a lot of room on the roadmap. Also, Ubisoft is known for surprise one-day events like on April Fool’s Day or Star Wars Day, so you can assume something is going down.

New month, new roadmap! And February is always an important month for us.

Some highlights:
⚔ Hope (Y4S1) starts today.
⚔ New content of the week coming on the 13th and 20th.
⚔ For Honor’s anniversary on the 14th! pic.twitter.com/HkwelWfyni

Another special few days will be February 21st to February 24th. The Extra Loot Fest will be active during this time, where bonus in-game currency can be earned during matches. For Honor is available, and always will be, on PC, Xbox One, and PS4.

Have you been playing the For Honor content? Let us know in the comments below.


Carousel of Death returns to For Honor for Third Anniversary Event