Become a Cookstar With Cooking Mama on Switch

A recently leaked trailer unveiled an upcoming Cooking Mama game known as Cooking Mama: Cookstar. Although they neglected to give a release date during a recently shared trailer, Dutch game store website, Nedgame, appears to have leaked the release window of the game. Nedgame suggests that Cooking Mama: Cookstar will release in March. Considering the general Nintendo Direct drought that fans of the big N have been experiencing and the lack of an official release date, Cooking Mama may be part of an upcoming Direct. When Cookstar releases for the Nintendo Switch and PS4, it’s expected to cost $39.99 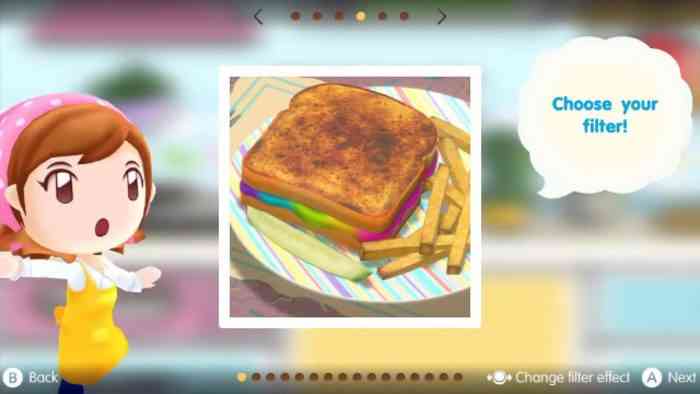 Although Cooking Mama is nothing new to the Nintendo family of consoles, it will be the first HD game in the series made for a Nintendo console. Moreover, Cooking Mama: Cookstar is the first title in the series to release for another console alongside its corresponding Nintendo platform. The title puts an emphasis not only on cooking food, but admiring it as well. The trailer shows a rainbow grilled cheese being observed closely by a player, allowing them to rotate the angle of the picture and add filters and stickers.

Cooking Mama: Cookstar hasn’t been officially announced with a release date but if Nedgame is to be believed, the game is coming soon. The cooking series first started on the Nintendo DS in 2006 and since then, an iteration of the game has released on each Nintendo console. The availability of the game on PS4 is an interesting possibility for the series, exposing it to a new audience on the Sony branch of consoles and potentially breathing new life into the Cooking Mama recipes. We’re looking forward to seeing Cookstar when it’s done cooking.

Are you a fan of the Cooking Mama series? What’s your favorite title of the previously exclusive Nintendo games? Let us know in the comments below!

Check Out Venba, Cooking Game About an Immigrant Family
Next
EA The Latest Organization to Pull Out of GDC
Previous
Streets of Rage 4 Multiplayer Revealed