During the recent Nintendo Indie World presentation developer Digital Continue showed off their innovative game that makes games called SuperMash. Gamers will have to mix two out of six genres that the game generates by itself to create unique gaming experiences for potentially endless supplies of newly generated games. The game takes familiar tropes and art designs from the genres that will be familiar to all gamers from the turn-based tactics of JRPG’s to the floating stages with upgrades from classic platformers. SuperMash is availableright now for $24.99 on PC through the Epic Games Store and it will be releasing on the Nintendo Switch, Xbox One and PS4 in 2020. 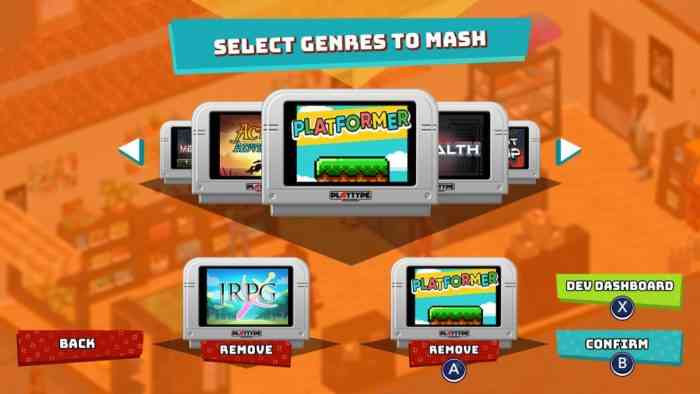 So far, there are only six genres officially revealed by Digital Continue which are stealth, JRPG, metroidvania, platformer, shoot ’em up, and action adventure but the developers assure gamers that they’ll be adding more genres to generate more unique titles. Apparently SuperMash has a story-driven campaign that will hopefully answer why the original six genres were chosen. We imagine the campaign including worlds that focus on each genre with stages that include elements of each of the other genre to give gamers an idea of what mashing up looks like for each category.

Players can also use Dev Cards to customize their mashups eve further, adding even more possibilities to the limitless potential of SuperMash. Each mashup can be shared with other players through sharing codes, while gamers can also save mashups to play them whenever they want so if you come across one you really enjoy, it isn’t gone forever once you’re done with it. Finally, SuperMash introduces glitches in every mashup to ensure that each of them feels and plays differently from the other, so we’re looking forward to seeing what kind of glitches the game generates.

Which two genres are you looking forward to mashing up? How many unique stages do you expect from SuperMash? Let us know in the comments below!