Raining Down on Consoles – Risk of Rain 2 Console Release

Forecast Reveals Fun With a Strong Chance of DLC

Risk of Rain 2, which up until now was only on PC, is now on Nintendo Switch, PS4, and Xbox One. In fact, the console editions are full releases, while the PC edition is still considered in Early Access. It was originally released on Early Access in March and will get a full PC release in Spring 2020, says the developer Hopoo Games. The Risk of Rain 2 console release was announced at PAX West two days ago, when the event started. It is currently priced at $29.99 USD across all consoles and $24.99 on Steam. 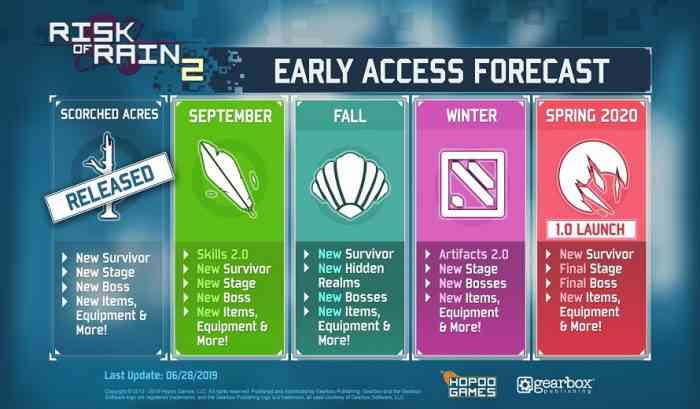 In March, Hopoo Games released a roadmap for Risk of Rain 2 DLC covering updates that started in June through Summer 2020. As it stands, the Scorched Acres update is out and that is what is included in the console release of Risk of Rain 2. There is still one major update coming for each season for the next year starting in Fall. Each update will bring new Survivors, Bosses, Items and Equipment, and areas. The Fall update will bring local multiplayer support to the Nintendo Switch. A launch trailer was also released alongside the game.

The Risk of Rain 2 announcement is not the only news from Gearbox at PAX West. Bulletstorm: Duke of Switch Edition was also shadowdropped during the event, Borderlands 2 VR is also getting a major update next week, and a Borderlands 3 DLC roadmap has also been released.

Are you going to be picking up Risk of Rain 2 on any console? Let us know in the comments below.


Baldur’s Gate 3 Will Reportedly Have an Early Access Launch