Borderlands 2 was one of the first and only pre-VR era titles adapted to support VR. Late in 2018, Borderlands 2 VR was released for PSVR. At the time, Borderlands 2 had already been re-released for PS4 and Xbox One with all the accompanying DLC, but the VR version only included the base game content, minus the multiplayer. The game is currently only available on PSVR, but now has a Fall release window for PC. It was also recently announced that Borderlands 2 VR DLC is coming next week. The game will now be about 90% caught up with the console editions. 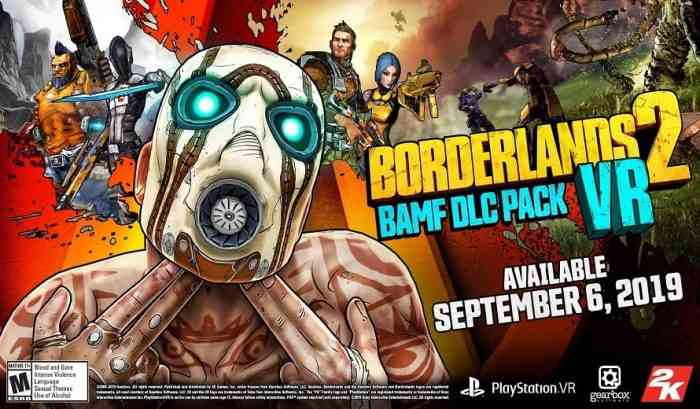 The “BAMF DLC Pack” (which is short for Bad Ass Mega-Fun) will include all the season 1 and season 2 content from Borderlands 2, as well as both the Ultimate Vault Hunter packs and both additional character classes. Season 1 is comprised of Captain Scarlett and Her Pirate’s Booty, Mr. Torgue’s Campaign of Carnage, Sir Hammerlock’s Big Game Hunt, and Tiny Tina’s Assault on Dragon Keep. Season 2 is the Headhunter Pack made up of the shorter DLCs T.K. Baha’s Bloody Harvest, The Horrible Hunger of the Ravenous Wabble Gobbler, How Marcus Saved Mercenary Day, Mad Moxxi and the Wedding Day Massacre, and Sir Hammerlock vs. the Son of Crawmerax.

The BAMF DLC Pack also comes with the Psycho and Mechromancer classes, Ultimate Vault Hunter Mode, and Digistruct Peak Challenge, as well as a bunch of Vault Hunter Skins and Heads. The only piece of DLC that is not included is Commander Lilith and the Fight for Sanctuary. It is not mentioned whether or not multiplayer support would be included. The Borderlands 2 VR BAMF DLC Pack (which is a lot of acronyms) will be available on September 6th for free, and the PC version of the game will be available sometime in late 2019.

Do you have Borderlands 2 VR? Let us know in the comments below.