Risk of Rain 2 Roadmap Plans Its Journey Through Early Access

They’re Taking No Risks with This One

Risk of Rain 2 hit Steam Early Access late last month. It has so far been highly praised by Steam users in its four weeks of availability. Despite how well Early Access has treated them, developer Hopoo has laid out its plans with an exit in sight and a full release on the horizon. In fact, according to the Risk of Rain 2 roadmap, at this time next year, we will be seeing version 1.0. Starting in June, there will be a major update every season, each with different additions. 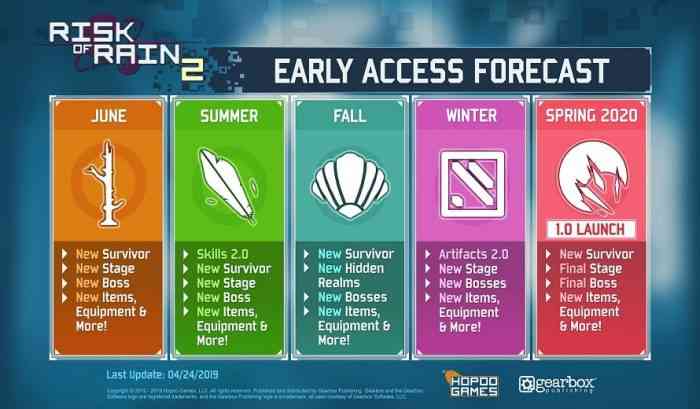 Let’s break down the forecast. The first update in June will be giving players access to a new survivor to play as, a new stage, and a new boss, as well as more items, which it seems every update will get. In the Summer, another survivor, boss, and stage will be introduced along with an update to the player skills. In the Fall, yet another survivor will be available, as well as “hidden realms” whatever they may be, and new bosses (plural). Winter will bring a new stage, more bosses, and a new wave of artifacts. Finally, the full launch will see one more survivor, the final stage and final boss.

That takes Risk of Rain 2 to version 1.0. Just imagine what post-launch updates will bring. It seems like each update adds a new boss, but note that some updates specify “bosses”. This tells us that Hopoo pretty much knows exactly what is being added and what it will be like already. And with Gearbox Publishing behind them, you know this is going to be a hit. Risk of Rain 2 will leave Steam Early Access and hit consoles in Spring 2020.

Will you be looking into Risk of Rain 2? Let us know in the comments below.


Main Assembly Is That Robot Builder You’ve Dreamed Of

A Year Of Rain Launches on Steam Early Access