Control’s content roadmap was revealed on Wednesday and it includes photo mode, a challenge mode, and new story content. The full roadmap can be viewed below. 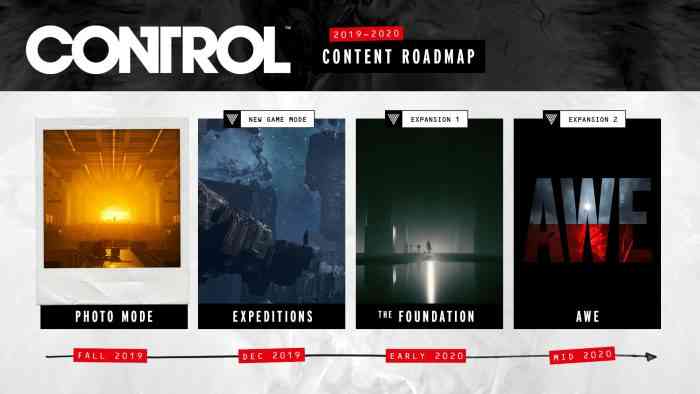 An official blog post didn’t provide any notable details about photo mode but more info is expected to be revealed soon. As for the free Expeditions mode, it was described as an “end-game” challenge mode that involves the game’s protagonist, Director Jesse Faden, exploring “the mysterious Formation” of The Oldest House alongside her security chief, Simon Arish.

The blog post also provided some story details for the paid DLC expansions, The Foundation and AWE.

“The Foundation will delve into the history of the Oldest House,” the post read. “At the request of the ever-mysterious Board, Jesse must explore what lies beneath the Bureau as she returns order to the Foundation and the Oldest House itself. Expect things to get weird.”

“The second expansion, AWE, will take Jesse into a new part of the Oldest House, the Investigations Sector, where the Bureau closely examines Altered World Events,” the post also read.

What’s your opinion of the roadmap? What do you think of Control so far? Speak your truth in the comments section below.