All Caught up with Tales from the Borderlands: The Story so Far

That’s It! That’s All the Games!

Borderlands’ little series of recap videos has come to an end. Starting a couple of months ago, just after Borderlands 3 was announced, these videos were put together by Gearbox and released as half-story recaps, half-ads for their specific games. Just a few days ago, the official Borderlands YouTube channel put out Tales From the Borderlands: The Story so Far… Where Tales From the Borderlands differs from the other Borderlands games is in the narrative based, decision focused gameplay of Telltale. Though a player can distinguish their story from another’s with the choices they make, the overarching story mostly remains the same. 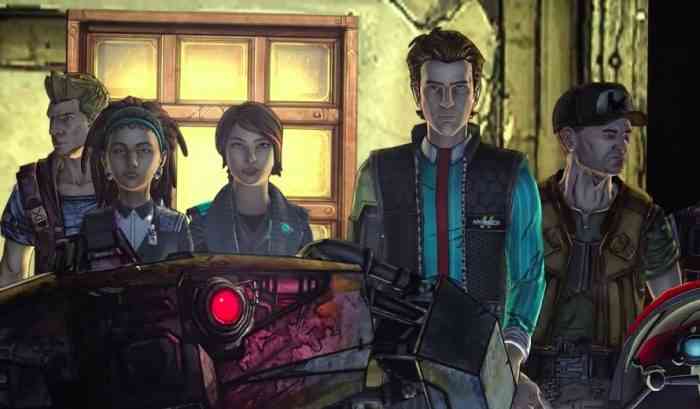 The story follows Rhys and Finoa, who stumble upon a Hyperion Vault Hunting project called Gortys which is a robot, also called Gortys. Rhys, who enhanced with various cybernetics, finds a Hyperion ID chip and installs it into his brain. This turns out to be a digital copy of Handsome Jack, who then tries to regain control of Hyperion using Rhys as a host of sorts. Rhys and Fiona are also forced to complete Gortys and her upgrades in order to locate another Vault. Rhys shuts down Digital Jack and brought Helios crashing down to Pandora’s surface. Gortys opens the Vault, but cannot defeat the monster called the Traveller that emerged. Regrouping with some former Vault Hunters, the Traveller is defeated and Rhys and Fiona enter the Vault.

The ending of Tales From the Borderlands is left somewhat unexplained with Finoa and Rhys being transported to an unknown location, but Rhys appears in Borderlands 3, so we may have to wait until September before we really figure out what happened. You can also check out all the other installments of Borderlands: The Story so Far on our site. Borderlands 3 comes out September 13th for PS4, Xbox One, and PC on the Epic Games Store.

Did you enjoy the Story so Far series? Let us know in the comments below.


New Tales from the Borderlands Reveal Coming to GamesCom 2022