Think of everything that has benefited from a wingsuit. Just Cause 3’s wingsuit made getting around better, Batman didn’t have a wingsuit, but his cape in Arkham City was neato. Even if you have vertigo, wearing a wingsuit all the time will make you feel safer. Whether you were displeased with Crackdown 3 or otherwise, the new addition of a free wingsuit is bound to make it more enjoyable. This comes in the new Crackdown 3 Flying High update available right now. This is the third free content update pack for the game. 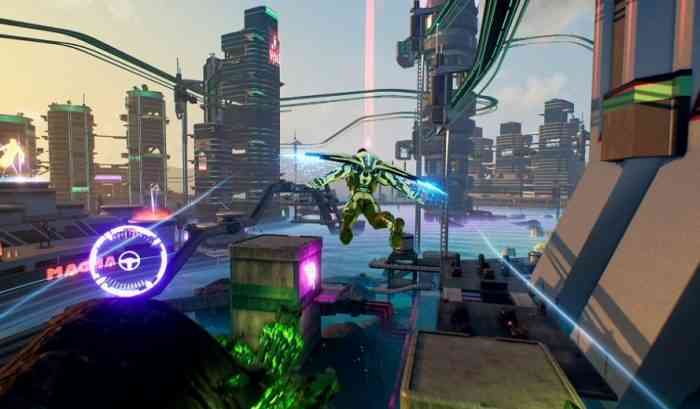 The new wingsuit, which looks like a futuristic set of wings, allows you to glide, swoop, and maneuver through the city. And it’s not the only thing the Flying High update delivers. Because it’s Crackdown, of course players will be given a whole set of new toys to blow up bad guys. The new Clusterduck Grenades are bunches of yellow explodies that will boom the duck out of enemies. There is also a new gadget called the Elemental Forge that lets you pick between four melee weapons, each corresponding to a different destructive element; electricity, fire, ice, and poison. The update also adds 14 achievements worth a total of 500 Gamerscore.

With the whole high jumping, gliding, elemental powers, and super strength, Crackdown 3 is looking more and more like Saints Row IV. As a Saints Row fan, I’m not complaining, just pointing something out. Again, the Flying High update is out right now. Also, check out our review of Crackdown 3 here.

Is this enough to bring Crackdown back into the public’s favour? Let us know in the comments below.

Monster Hunter Rise: Sunbreak Review – Monstrous DLC
Next
Square Enix Begins Hiring for New Dragon Quest Development
Previous
All Caught up with Tales from the Borderlands: The Story so Far