After the success of Conker’s Bad Fur Day back in 2001, Rare got to work on a sequel that never made its way out of the bar. But now, 18 years later, designer and voice of Conker himself Chris Seavor has revealed what the swearing squirrel’s “Other Bad Day” would have entailed. 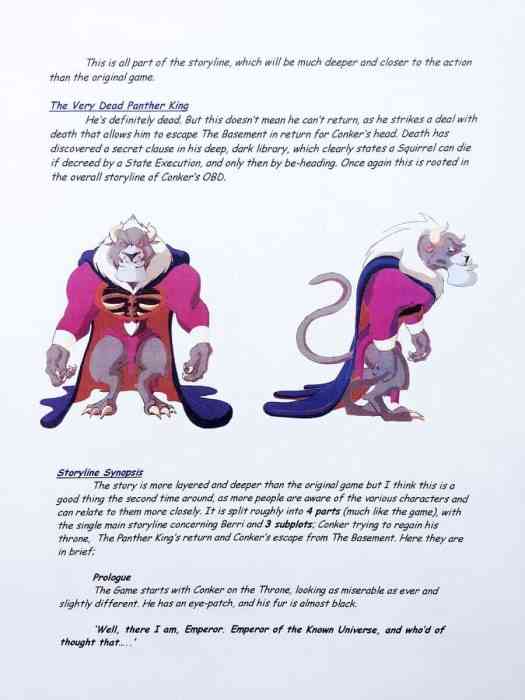 Over on Twitter, Seavor revealed a series of pre-production game documents for what was being dubbed “Conker’s Other Bad Day” at the time. It would have picked up right where the first one ended with Conker sitting on his throne as Emperor of the Known Universe, ruling with a sticky, furry fist. The main story would split into four chapters, revolving around Conker’s quest to reclaim his throne, and the return of the Panther King from the help of a perpetually-pissed off Death.

Once the Panther King comes back the action ramps up considerably, with Conker being tricked into killing the Weasel Mafia Boss. Conker is arrested, put on trial for murder, and subsequently executed for his crime.

Being Conker’s Known Universe, dying is clearly not the end, as the alcoholic squirrel wakes up in an enormous nightclub called The Basement. This is where Conker would find out about how the Panther King escaped the afterlife by making a deal with Death, offering the squirrel’s head in exchange for his resurrection (and this is all explained by Death, who hates Conker very much following the events of the first game). The Panther King “swaps body” with Conker, and receives his resurrection as a “darker, more vicious version” of him. Following this, a B-plot with Berri is set up that sees her trapped in suspended animation in a fluid tank.

Players are then given control of the Panther King/Conker hybrid, where the goal of the game is to find the rest of his cash and regain his rightful claim as King of the Known Universe. Of course, the player succeeds, and then is forced to fight and kill several of Conker’s friends from the previous title (including the Raptor). This part of the document ends with “very tragic,” so I guess we’ll have to take his word for it.

Fortunately for real and still very dead Conker, his freshly murdered friends have arrived in The Basement to help him take on Death. Conker would have defeated the grim reaper by taking advantage of his allergy to felines, and dealt with the Panther King by banishing him to the deepest darkest cell of the prison tower (where the game apparently would have kicked off). Conker reclaims his throne with a full blown Punished Conker aesthetic (eyepatch, stiched up neck), gets himself a glass of milk and starts planning a wedding with a character he met earlier in the game named Bunni the Rabbit. Everything is awesome, and the credits start to crawl up the screen.

Then shit really hits the fan. The castle begins to shake, prompting Conker to consult one of the game’s programmers, who claims not to know. From what can be seen in the document notes, this is where the fourth chapter, regarding a spaceship called The DeathStarFish, would begin. Unfortunately, this is where this section of the game document ends, but Seavor did share other parts of it that reveal what could have been.

Another sheet outlines the game’s structure, which would have included Conker’s Castle as a main hub, with access to a collection of locations from the first game, as well as new ones. Yet another sheet gives a brief breakdown of each level and a sketch of the aforementioned new love interest, Bunni. There’s a lot of jokes written into these as well, which reveals just how calculated and baked-in Conker’s humor is.

Conker’s Bad Fur Day is one of those games that has never received the sequel it deserved, despite basically unrelenting fan demand for it ever since the original’s release. There was a small episode made to show off Xbox’s Project Spark game-creation-game, but we don’t really talk about that. Fortunately, the Xbox-redux of the game, Live & Reloaded is playable through Xbox One‘s backwards compatability.

N64 Classic Remaster, Shadow Man Receives a PC Release Date
Next
Ancestors: The Humankind Odyssey Launches on PC in August; Releasing on Consoles Later
Previous
Call of Duty: Modern Warfare Is the Title of the Next CoD Game