Plague Inc. About to Become Easier Thanks to Anti-Vaxxers

If you thought fatal disease simulator Plague Inc. was too hard before, a new petition has convinced the game’s developers to include a real-life mechanic to make the game a bit easier: stupid human arrogance.

Alright, alright! You spoke, we listened. Neurie’s very happy to hear that we’re going to start figuring out anti-vaxxers soon. He’s dying to try and get inside their heads. https://t.co/fYq09awgJc pic.twitter.com/Sof0aJE0yw

For the uninitiated, Plague Inc. is a strategy sim where you play as a disease trying to eradicate the human race by spreading via water, air, and stupid assholes who don’t wash their goddamn hands like a decent person does. Recently, the game’s fanbase gathered ’round to sign a petition asking the game’s developers to include a fatal disease’s best friends in the whole wide world – anti-vaxxers.

If you’re unaware of what an anti-vaxxer is, they’re basically, literally, Pestilence of the Four Horsemen of the Apocalypse in the form of an anti-intellectualist movement nurtured by uneducated and ignorant conspiracy theorists Jenna McCarthy and Alex Jones, among others. The result is the return of fatal diseases that had been long-eradicated thanks to vaccinations (such as measles, mumps, and rubella), and thus, people (specifically children) contracting said diseases. Their argument for being against vaccination is that they “cause autism,” which has been scientifically disproven every day for the past 100+ years and counting. 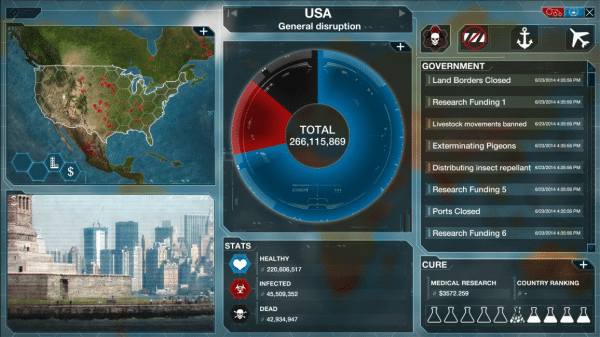 Naturally, the petition reached over 20,000 signatures, and developer Ndemic will be honoring it by implementing the moronic movement in an upcoming patch. No word on how or when, but at the very least it’ll bring some old players back to try out the new mechanic. Let us know what you think in the comments!