For Honor launched on PC, Xbox One, and PS4 in February of 2017. Almost two full years later, it’s still going strong, and developer Ubisoft shows no sign of slowing down. While it has not been the most dominating force in gaming news, For Honor has been consistently updating, launching seasonal events, adding new modes and features since its release. Most recently, For Honor had a limited time crossover event with Assassin’s Creed last month. Now, we get a closer look at the For Honor Year 3 plans; the Year of the Harbinger. 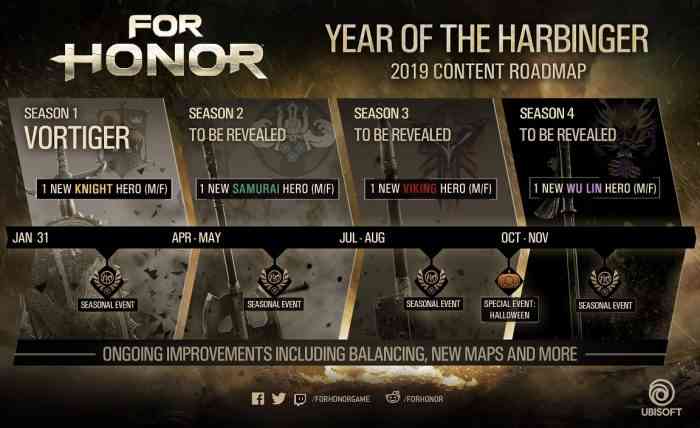 Some of the most popular types of updates or DLC is a new character. That is exactly how For Honor plans to open up its third year of activity. The Knight class gets a new hero called Vortiger the Dark Hero. Along with Vortiger, a new map is accessible for all players, both available on January 31st. Vortiger will be unlocked immediately for players who have purchased the Year 3 pass. Those who have not can still buy him for 15,000 Steel, which is the in-game currency. He becomes available for those without the pass on February 15th.

The map and the hero part of just one of the four seasons For Honor has planned this year. Sometime between April and March, Season 2 begins. This will bring a new Samurai hero for players, and likely a new map to accompany. Season 3 and 4 will launch in July or August and October or November, respectively. Same plan; one new hero, maybe new map. The heroes for Season 3 and 4 will be for the Viking and Wu Lin factions respectively. The image above lays out the next year of For Honor, will seasonal events for each season.

What are your thoughts on For Honor: Year of the Harbinger? Let us know in the comments.