Pearl Abyss announced today that Black Desert Online will see its full release on Xbox One this coming March, along with pre-order details and bonuses.

The MMO will land on Xbox One on March 4th, and players who plan on pre-ordering have three different versions to choose from in the Microsoft Store: Standard, Deluxe and Ultimate. You can check out the differences in the chart below (prices in USD): 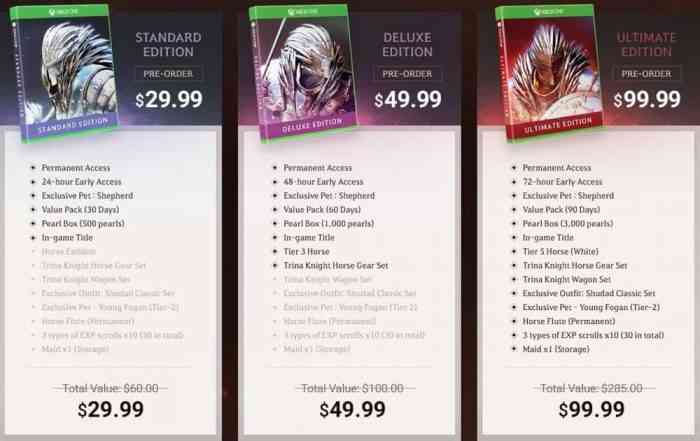 Pearl Abyss CEO Robin Jung said “After the enthusiastic reception of the Black Desert open beta in November 2018, our team has been hard at work making significant improvements to enhance the base game ahead of launch on March 4. We appreciate the feedback we received from our Beta testers and the Xbox community and look forward to sharing the final experience in the coming months.”

Black Desert Online is promising a host of new features for its Xbox One outing, including a new plot line, remastered graphics and audio, an optimized UI, along with 4K UHD support. The MMO has been available on PC for almost 3 years now where it’s seen quite a bit of success, receiving a remaster this past August. Check out what we thought of the Xbox One version last year at E3 and let us know if you’re looking forward to it in the comments!

New Overwatch Update Significantly Boosts Tracer
Next
He Works in the Dark to Serve the Gamers: Assassin’s Creed Controller
Previous
Borderlands: Game of the Year Edition Spotted Again for PS4/Xbox One