He Works in the Dark to Serve the Gamers: Assassin’s Creed Controller

No Hidden Blades Though

The feel and design of a good controller is hard to capture. For the most part, consoles of the last 30 years have had pretty solid controllers. There are exceptions of course. The Atari Jaguar’s controller looks part-calculator and has the buttons C-B-A laid out backwards. The N64’s controller has an awesome design for a space ship, but not a controller. The OG Xbox’s Duke is big and bulky enough to fell an elk if thrown. And third party controllers… Oof. Luckily, End of Line Designs has managed to churn out a bunch of custom controllers without sacrificing the functionality. The latest one is the Assassin’s Creed controller. 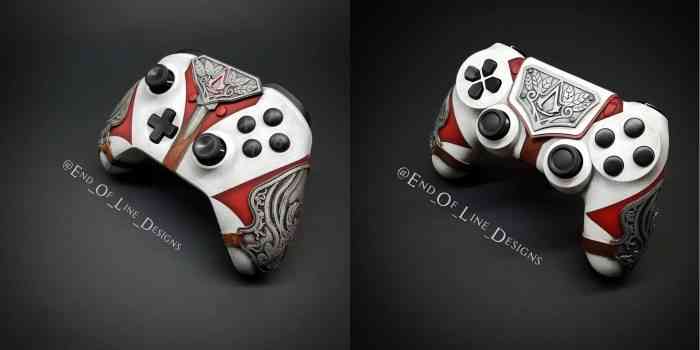 Devin Smith, the man behind End of Line Designs, has spent the past 4 years creating and displaying his handmade custom controllers. The controllers are all inspired by different game series. January 4th saw Smith’s latest work seen above. The designs from the various games that inspire him often depict leather and metal plating from armour and weapons. End of Line Designs doesn’t cut corners in these areas, as the controllers use real leather and metal plates. The light on the Xbox One’s home button is often repurposed for a glowing symbol and in the case of the Assassin’s Creed controller, they Assassin symbol gives a red glow. The PS4 controllers thus far all have covers over the touch pad that flaps open and shut.

The previous designs End of Line has done include Metal Gear, Star Wars, Hitman, Captain America, Dishonored, Fallout, God of War, Elder Scrolls, Batman, Rage 2, and Diablo. Some of the designs have uncomfortable features, such as Batman’s sweet arm blades, but with these controllers have options to remove them for playability. Not all of the controllers can be purchased and the ones that are are available for limited times, but with the Assassin’s Creed controllers being posted only a few days ago, perhaps you too can get one. You can view all of Devin Smith’s designs on his Facebook page.

What do you think of these custom controllers? How much would you being willing to shell out for one? Let us know in the comments below.

Assassin’s Creed Origins Will Be Free to Play This Weekend

Assassin’s Creed Valhalla Captures the Essence of the Dark Ages