New Diablo Game In The Works Outed By Job Listing

The Minions of Hell Grow Stronger (With Excitement!)

Blizzard has posted a job listing for a “Dungeon Artist” specifically for the Diablo series. 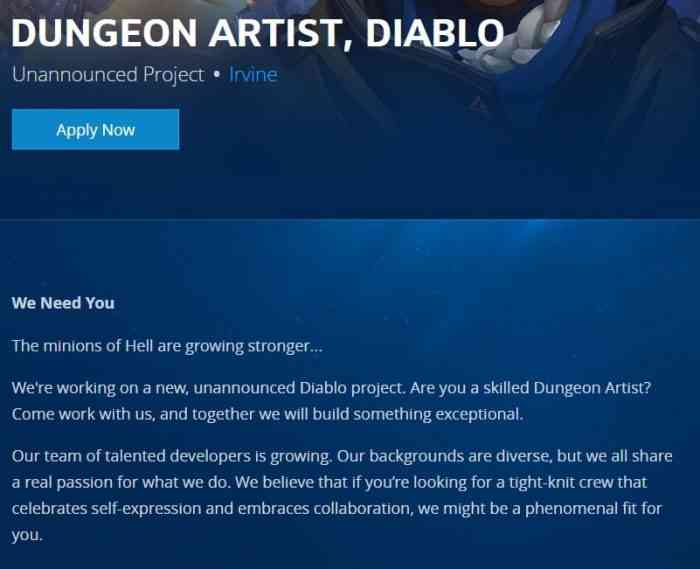 Blizzard has yet to officially announce anything regarding a new Diablo title, and though fans have been clamoring for a Switch port of everyone’s favorite Diablo III, this listing looks more like it’s for a new title rather than a port. That being said, Blizzard doesn’t seem to be shying away from Diablo III support, as the most recent Necromancer expansion released just last June 2017, and Season 14 of the online title begins today.

Unfortunately, there’s not really any information regarding the unannounced title aside from that (save for the responsibilities and expectations of applicants), but we’ll be keeping our eyes and ears peeled this November during Blizzcon 2018.

What do you think? Let us know in the comments! And keep up with our coverage of all the latest rumors and leaks including the recent leak for Fortnite coming to Switch, as well as some new Gamecube controllers just in time for Smash Bros!

You Can Play Crash Team Racing: Nitro Fueled for Free This Week
Next
Pogs Are Coming Back As An AR Mobile Game
Previous
Fortnite for Nintendo Switch Practically Confirmed via Update Data