Loot Crates Are Not Considered Gambling, Though It’s Pretty Close

People are really hitting the in-game rewards really hard these days. So far, there have been two major pushes to have Loot Crates and anything resembling the system classified as gambling amongst PEGI and the ESRB. However, the ESRB has already stated that Loot Crates are not a form of gambling. The official statement from ESRB reads:

“ESRB does not consider loot boxes to be gambling. While there’s an element of chance in these mechanics, the player is always guaranteed to receive in-game content (even if the player unfortunately receives something they don’t want). We think of it as a similar principle to collectible card games: Sometimes you’ll open a pack and get a brand new holographic card you’ve had your eye on for a while. But other times you’ll end up with a pack of cards you already have.”

A British Parliamentarian has submitted two questions to the Secretary of State for review:

“To ask the Secretary of State for Digital, Culture, Media and Sport, what assessment the Government has made of the effectiveness of the Isle of Man’s enhanced protections against illegal and in-game gambling and loot boxes; and what discussions she has had with Cabinet colleagues on adopting such protections in the UK.”

“To ask the Secretary of State for Digital, Culture, Media and Sport, what steps she plans to take to help protect vulnerable adults and children from illegal gambling, in-game gambling and loot boxes within computer games.”

Why so much pressure on Loot Crates? You at least get something!—albeit the same thing you’ve received in the last five Loot Crates that you worked an hour for. Here’s one argument that’s being presented:

But why just give you the item you want? Then the game’s over and it’s no fun anymore, hunting for the item you want! That’s right, but consider that people with compulsive tendencies can acquire Loot Crates for $1.99 a pop, saving the time it takes to earn a Loot Crate; now the person is spending real money, approaching the value he paid for the game itself. 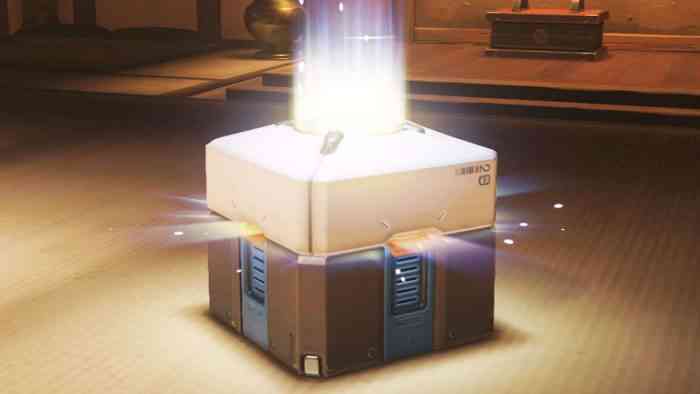 Let’s say there is a pool of five Legendary items in Overwatch, and the player wants one of those Legendary items. Given Overwatch’s China numbers, that person has a one in 67.5 chance of getting his item. Now, let’s say this person pays for all Loot Crates: he will spend $134.33 to get the item he wants.

Now consider DLC: once DLC is released, this precious item that the player coveted for $134 is now reduced to garbage. Rinse and repeat.

ESRB has ruled that Loot Crates are not gambling because you get something for your money, but it is walking a dangerously close line. Games that have gambling constitute an Adults Only rating, and are defined as players wagering with real-life cash—something that players are already doing with the Loot Crate system. And if you look at the odds we just set up, they are dismally worse than playing a hand of Blackjack. The difference is the end goal of Blackjack is one-to-one: you bet money and you hope to win money. With Loot Crates, you’re sifting through a wading pool of crap to get to your prize money, and then you take a one-in-five chance on that.

This is why gamers loathe microtransactions in games: either there is an increased chance to get a rare item, circumventing all the hard work regular players put into the game, or chances are the same and it’s that age-old question of time versus money. The third option is “exclusive paid content”, which I’m not going to even open that Egg Salad Sandwich in this article.

One thing is a definite indicator: major game publishers who have microtransactions included (looking at you, EA) are artificially inflating their base games’ bottom lines with in-game Loot Crates. The money does not go back into the game, because the game is already out. If DLC looks shoddy, it’s another cash grab, adding to the staggering chances of getting another DLC loot drop. Where does the money go? Something tells me the major video game players are sitting very well right now.

The Ascent May Be Coming to PlayStation ESRB Rating Suggests

The Witcher 3: Wild Hunt Just Got Rated for Next-Gen Consoles
Next
Sony Not Giving Up on Virtual Reality Like Everyone Else; Says “Best is Yet to Come” for PSVR
Previous
Call of Duty WWII Gets Live-Action Trailer – It’s Not What You Think