World of Tanks Rolling in 4K on Scorpio

World of Tanks is the most accessible free-to-play MMO action title for tank enthusiasts. You want tanks? They got tanks on tanks. It’s available across PS4, Xbox One, Xbox 360, and PC. Wargaming.net is responsible for the “World of …” series, with World of Airplanes and World of Warships, but none as successful as World of Tanks. Up to 15 players square off, choosing their best tank and tactically dismantle the other party’s prized tanks. Rewards and levels unlock new skins, parts, and of course … new tanks. World of Tanks also features ongoing events for even more in-game currency and unique customizations. 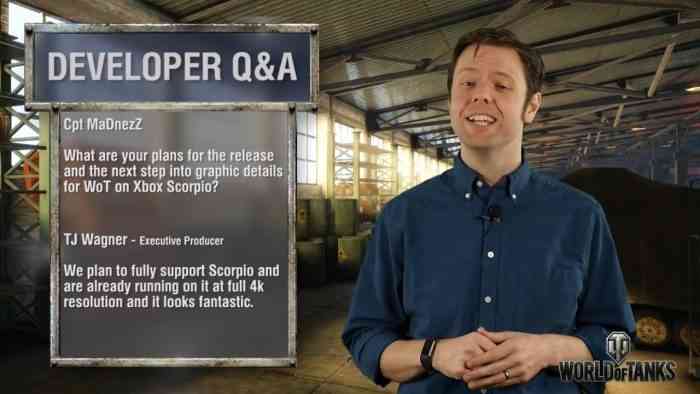 In a new developer Q&A on Xbox One’s reddit thread, Wargaming.net has confirmed that the game will have support for the Xbox Scorpio. Similar to Turn10’s Forza news, they are already running the game at native 4K on Scorpio hardware. Though this isn’t an official confirmation by the developer, it does make a strong allusion.

The top comment on the thread echoes the sentiment that 4K is easy to achieve on Scorpio (by dieklobrille):

“The best news here is that even developers that are not technical wizards like Turn10 seem to have absolutely no problem at all getting their games to native 4K on Project Scorpio. The dev kits aren’t out for too long and they already have in running at native 4K. Seems like the info ‘get your game to native 4K within a matter of days/weeks – and you still have a lot resources left for other improvements’ are indeed correct.”

Being across multiple platforms, World of Tanks also has to focus on the upscaled resolution coming from the PS4 Pro. Keep in mind, this is not native 4K, which has dimensions of 4096 x 2160. That’s where the choice of words are very important for Developers releasing official statements. If Wargaming.net is saying “native 4K”, they’re bringing all 4096 pixels with them in their glorious two-ton tanks.