Head to Dimension 404 and Get Sucked In

Hey, you like video games, right? You’re on this site, so you must. You remember where video games began? Of course you don’t, you’re probably some millennial or something, get off my lawn. But if you do remember those days of the plywood cabinets of arcade games stacked shoulder-to-shoulder in a dimly-lit room, Dimension 404 just dropped a nostalgia-bomb right on your acne-riddled, braces-teeth face. And if you miss Stranger Things, you’ll get your fix, you junkie. 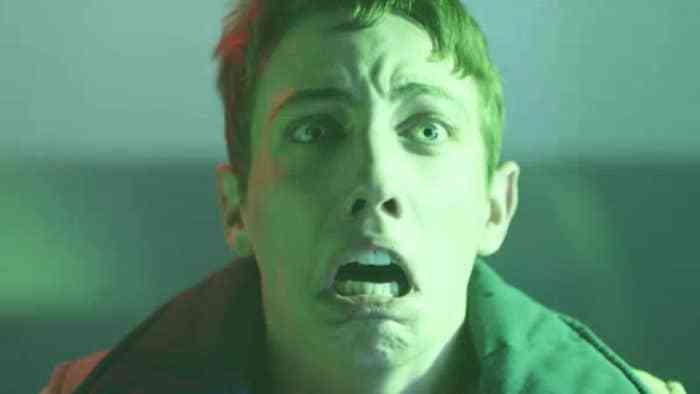 All your souls are mine! Polybius follows Andrew Myers, a small town kid with aspirations of breaking into the video game journalism industry (dang, this is really meta). He frequents the same arcade, trying to get the “kill screen” for Frogger (but because of licensing, it’s Mr. Frog) and write his tutorial for the video game mag “Bits and Bytes”. Andrew won’t be able to write a current review, because his small town arcade never gets any of the new cabinets. He’s still playing Centepede when they’re onto MILLIPEDE now!

It seems Andrew’s hopes are crushed, until he discovers a mysterious arcade game that no one’s ever heard of: Polybius. Andrew becomes obsessed and plays as if his life depends on it. Spoiler: it does. The demon in the machine brands Andrew and his friends, with the same message as the game: RUN!

The aesthetic matches 1984 perfectly: everything is wood-paneled, the soundtrack is Synthwave, and neon lights cast eerie silhouettes. Even the video game itself is done in wire frames and scan lines. It is reminiscent of SINISTAR, which was released in 1983. Perfect for any Stranger Things fan to get a 45-minute fix.

The story is campy and fits the 80s horror theme well, though it may be a little thin. However, the introduction of modern issues like sexual orientation and religious repression didn’t feel forced and was a welcome addition to the backdrop of a troupe-filled 1980s horror.

Hulu collaborated with RocketJump, a YouTube production house headed up by Freddie Wong. Wong is a VFX artist and, get this, a competitive gamer. RocketJump is also responsible for Video Game High School, so needless to say, video games are in their wheelhouse.

And with that, we leave you with some words of wisdom from our beloved mascot, SINISTAR:

Here’s How Sony is Approaching Media on Playstation 5