Curve Digital and developer Four Circle Interactive have just revealed that their thrilling action platformer and follow-up to 10 Second Ninja, 10 Second Ninja X, will launch worldwide on July 19, 2016 for PlayStation 4, Xbox One, PlayStation Vita, and Steam.

The game’s premise is simple: destroy everything within ten seconds in order to continue. But 10 Second Ninja X hides loads more behind its initial promise, as console and PC owners will discover. Designed from the ground-up to be instantly replayable, 10 Second Ninja X is as joyous as it is challenging, and failing a level, be that by meeting a painful end or not completing the objective within ten seconds, is guaranteed to be entirely the player’s fault.

10 Second Ninja X boasts 60 immaculately designed levels spread across six rich and varied worlds. While much of the challenge comes from demonstrating the dexterity and reactions necessary to traverse each level within ten seconds, players looking for a bigger challenge will want to complete each as fast as possible. Each level is a puzzle, with its hallowed three-star reward reserved only for the genuinely skilled. Three-starring levels requires such pixel-perfect precision, such error-free choreography, that a perfect run will come rarely. But when it does, oh boy… 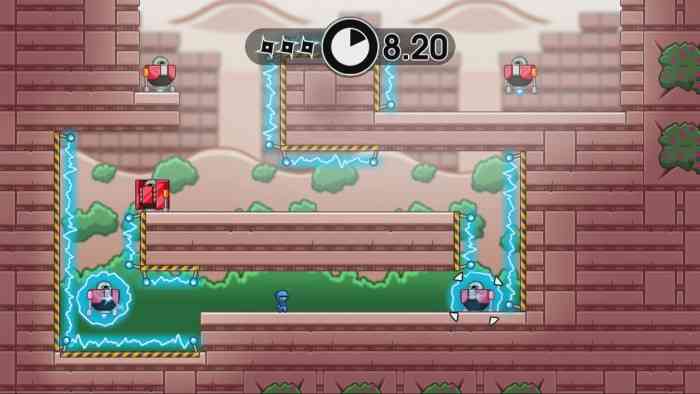 New features in 10 Second Ninja X include a bunch of new mini games, a host of unlockable costumes, a ghost mode, a new hub world and all-new HD visuals. And once the game’s 60 levels have been completed, players will unlock remastered versions of the original 10 Second Ninja levels, though with the “dubious” content removed in order for it to pass console certification.