My time with Super Cloudbuilt was a keen reminder that I wasn’t the gaming master that I secretly thought myself to be. I’m sure that there are many of you out there who think that it’s easy to pick up a game and just be good at it, but I dare any of you to try Super Cloudbuilt. This awesome puzzle platformer is often frustrating, but it’s also a high octane, fast-paced experience that gets the blood pumping.

Super Cloudbuilt tells the story of a soldier, deep in a coma after injuries she sustains on the battlefield almost punches her ticket. Or, at least I’m pretty sure that’s what’s going down – the story is the weakest link of the game. The entirety of Super Cloudbuilt takes place in her mind, and each level you complete uncovers other parts of the hospital for you to explore, while also shedding light on how the soldier is feeling and what she hopes her future holds.

While the story isn’t as compelling as I’d like it to be, the gameplay is where Super Cloudbuilt shines. Each level, from the very beginning to the very end, is meant to challenge the hell out of you. This game sets itself apart from other games right down to the way that you move so that natural ability to pick up a controller and go is scrapped—you’ve got to start fresh.

“This game sets itself apart from other games right down to the way that you move so that natural ability to pick up a controller and go is scrapped—you’ve got to start fresh.”

In the beginning areas, you’ll find yourself running into walls, cutting corners too sharply, and plummeting yourself off the map. Twenty plus deaths later, after you’ve got the movement down, it’s time to learn how to overcome obstacles like turrets or power management—anything that can keep the player from thinking they’ve got a hold on things. Super Cloudbuilt doesn’t reach down and grab the player’s hand before they fall. Instead, it lets us fall over and over again, until well, we don’t.

You’ll also begin to understand that these worlds are free form in the way you can reach your goal. There is no one path, which is great for not breaking up the fluid motion of gameplay. Instead of learning the one successful way to beat the level, if you have confidence in your movement, there are an infinite number of ways that you can ascend. While the levels are small, you’ll spend a lot of time reaching your goal, and your way of doing it will be unlike any other players. 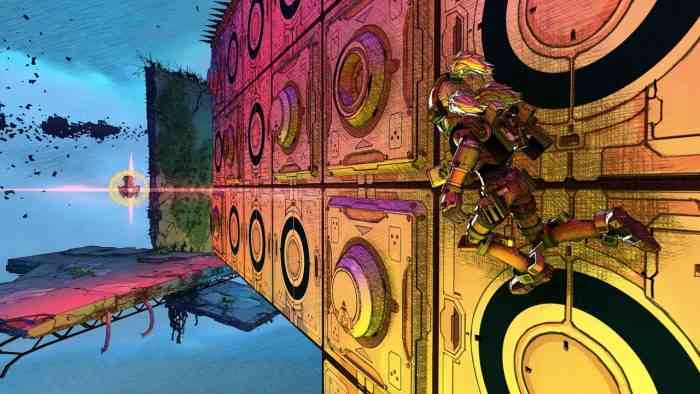 Super Cloudbuilt has an extremely distinct art style and while I enjoyed its ever-changing color palette, the original cross-thatching visuals were hard on the eyes and made identifying paths very difficult at times. Thankfully, the game allows you to switch between a variety of different graphic styles, all of which carry their own brand of flair.

My main complaint comes in the form of how lives are divvied up because it doesn’t follow traditional gaming conventions and flounders in its execution. When you complete a level, you earn another life slot on top of your original six lives, which means you’ll be able to experiment with movement and have more room to make mistakes. What’s weird is that these growing life slots won’t automatically refill when you reach a checkpoint or even when you reach a game over—they’ll only ever refill to the original cap of 6. You’re earning life slots, but they only ever benefit you if you go and manually refill them at the hub level, and even that’s on a timed system. It’s not so much that this is a bad system; six lives are fine most of the time, but it’s very confusing—a mechanic that doesn’t feel like it was fully thought out.

“I can’t wait to see how the mastery of this game grows through the community, and how speedrunners are going to bend time and space to make it happen.”

But gaining these life slots is just one challenge out of over a hundred. With its great versatility in movement, Super Cloudbuilt’s levels have great replayability, and the developers knew their strengths. They created challenges that are fun to run through, so much so that they call the player back to do it again. Weapon augments or new costumes are all fun to earn, but the challenges really shine in through the time trials. Don’t get me wrong: I’m still terrible at Super Cloudbuilt. But there are people who are going to take these time trials and make them something to drool over. I can’t wait to see how the mastery of this game grows through the community, and how speedrunners are going to bend time and space to make it happen.

All around, Super Cloudbuilt took me from a baby just learning how to walk all the way to an angsty teenager yelling at the screen. A full blown adult who’s in full control of his movement? No way—I’m barely that in real life, but I reached a level of confidence that brought excitement and not apprehension when I leaped for a platform that might just be too far out of reach. Super Cloudbuilt isn’t a perfect experience, but a fun one without a doubt.

**Xbox One key provided by the publisher** 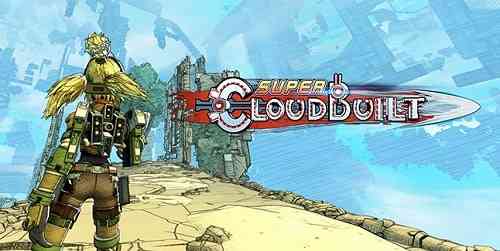