Black The Fall Review – Been There, Done That

Black The Fall is a puzzle platformer which wears its influences on its sleeve. Many have been quick to point out its similarities to games like Inside and dismissed as being too similar to be relevant. However, much of the indie platformer scene is nipping at Playdead’s heals, so borrowing aesthetics from them isn’t enough in itself to write a game off if it is genuinely engaging. Sadly, Black The Fall doesn’t bring enough to the table to stand out in the competitive indie market.

It’s impossible to avoid the influences Playdead’s other games have had on Black The Fall. But perhaps it is unfair to call it completely derivative, at least in art style. While we have seen these kinds of visuals before, they are also thematically relevant to the story. As the game began. The bright red set across the otherwise stark monochromatic art style conjured a specific atmosphere. It could even be said that the art design alone could have delivered the message, I didn’t need to see a hammer and sickle. It’s a shame that the game wasn’t a bit more thematically subtle because the art design really worked in the story’s favor.

“It all comes down to a game that, while not terrible, isn’t going to set the world on fire.”

However, what is not working in the story’s favor is the controls. I played with a mouse and keyboard, and there was a slight delay between input and response. In particular, jumping felt excessively sluggish. While these issues alone were not game breaking, combining them with unforgiving puzzle design caused me to die more than enough times to get annoyed. If you mess up, there is no recovery time. This meant that I would move slightly too far into a turrets field of view and have one aggravating moment of realization before I was blasted into a cloud of dissident jam. The times I got stuck were very frustrating because I knew how to solve the puzzle, but missed my timing. Other times, I missed how the puzzle interacted with the environment because it isn’t always clear what reacts to you from moment to moment. Comparatively, I was never killed in Limbo by something I wasn’t aware was a threat… just a giant bloody spider.

All that being said, the mechanics that are unique to Black The Fall are genuinely engaging. While I found the controls fiddly, the laser controls were a mechanic that both increased the puzzler options and added a level of pathos to the experience. You are, in effect, enslaving the will of others to aid in your emancipation. It’s off-putting when you think about it and adds another layer of depth to the game. The robot dog doesn’t seem to have any depth, but it’s a dog, and who doesn’t love having a pet? 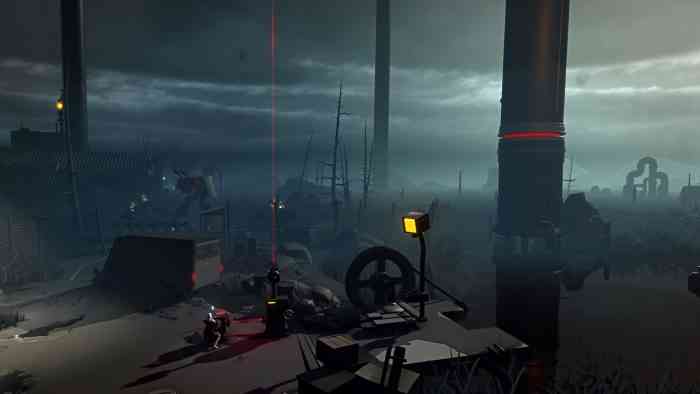 The sound design of the game was also strong. I found the industrial noise and muffled moaning really set the tone in the early parts of the game. The graphics are a bit more hit and miss. When zoomed out the feel is artistic even bold. But when the game closes in on the models and background, graphics seem a bit flat. The death animation was particularly unimpressive. Going back to Limbo for a moment, one of the reasons why that game affected me was how harrowing the death scenes were. In the game, there is just the jam cloud. Mowed down by a turret: jam. Punched by a guard: jam. Touched some fire: jam. I didn’t fear dying, didn’t cringe at my mistakes. It was just another momentary setback. My character just another number in a long stream of failures. If they had intended it, it would have been quite poetic given the themes.

It all comes down to a game that, while not terrible, isn’t going to set the world on fire. We won’t be seeing any Black The Fall clones in the next few months. If you play a lot of puzzle platformers and want another bleak monochromatic world to explore you could do a lot worse, but it has a lot of contemporaries to compete with. I had my taste and wasn’t impressed, but it wasn’t revolting either. I wasn’t sad to stop playing but I wasn’t excited to stop either. Just happy I don’t have to type out its name again.

The Cub, Post-Apocalyptic Adventure Game, Gets New Trailer and Demo
Next Super Cloudbuilt Review – Fly, Die, Then Try Again
Previous Aven Colony Review – In Space, Nobody Can Hear You Starve