It seems like the 3D platformer revival is going to be big in 2017. After the pretty decent Yooka-Laylee and the upcoming releases of Crash Bandicoot N. Sane Trilogy and Super Mario Odyssey – it seems like what’s old is new again. And as a fan of classic N64 platformers such as Conkers Bad Fur Day and Super Mario 64, I’m definitely excited about this revival! That’s why I jumped at the chance to give Grip Digital’s latest game, Skylar & Plux: Adventure on Clover Island, a playthrough. Does it capture that awesome feeling you get when you’re playing a good 3D platformer? Let’s take a look.

The story of Skylar & Plux: Adventure on Clover Island begins on a space station with the evil CRT (yes, the villain is a giant TV) augmenting our main character, Skylar Lynxe, with a mechanical arm. CRT’s intent is to turn Skylar into his very own killing machine. But Skylar escapes and crash lands on the planet below. The planet’s inhabitants, the Lo’a, have been kidnapped by CRT and scattered around four different areas (the main hub and the games three worlds). Skylar is soon aided by the completely useless Plux on a quest to save the Lo’a and recover three orbs (one from each world) to create a device that will stop CRT’s evil plan. Honestly, the story isn’t that great and seems more like an afterthought.

“Admittedly, there were some genuinely fun moments – I really like using the grappling hook and the Magnetic Glove provided some fun offense.”

You play as Skylar Lynxe, a biped female feline who is the only character in the game who can’t speak, which is a shame because you’re accompanied by an utterly useless bird named Plux who does absolutely nothing throughout the entire game aside from whine or spout off silly one-liners. For example, there’s a moment where we burst into an area, and Plux sings “we came in like a wrecking ball” a la Miley Cyrus, it was just awful. Then there is the evil CRT, who communicates with Skylar and Plux during the entire game. There’s quite a bit of banter between Plux and CRT, and while some of CRT’s comments are clever and occasionally funny, Plux just constantly ruins it. The developers were really pushing for humor, but it often feels extremely forced.

After a brief introductory level on the space station, you’ll end up on Clover Island in the hub level. From there, you’ll explore each of the three worlds in succession. Each world has hidden Lo’a that must be rescued by redeeming 100 gems that you can find throughout the levels. Collect enough Lo’a and you can increase your health. You have some basic close quarters attacks, which you’ll use to defeat the seriously lacking assortment of enemies. How lacking? There are literally 3 different types of enemies in the game (plus one boss character). Mini-CRT’s that run around, a cannon character that shoots heat seeking missiles, and an enemy with two rapid fire guns – the absolute bare minimum. The bulk of the game is platforming, and your biggest issue will likely be judging jump distances (which has always been a challenge for games like this). Each world will also present Skylar with a new ability to use. These abilities are used for platforming, offense, and puzzle solving and they do help to add some variety to the game. Unfortunately, the coolest ability, the Magnetic Glove, is found in the final world – so you don’t get as much use out of it as I would have liked. 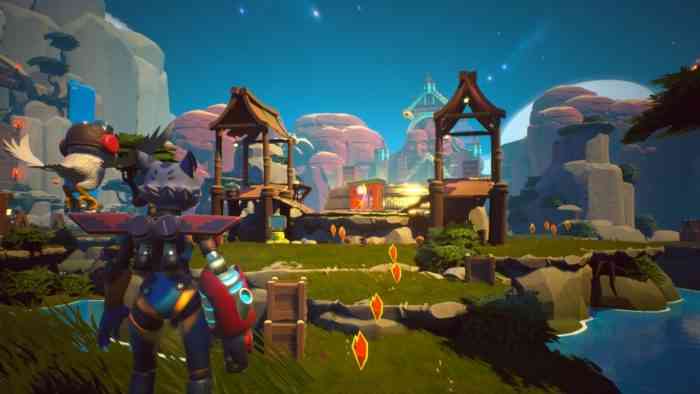 Skylar & Plux: Adventure on Clover Island has quite a few flaws in it. The game suffers from frame rate dips and times when the game completely freezes for a moment (not to the point where you’ll have to restart the game, but still annoying).There were glitches – for example, I encountered one near the end where I simply fell into the world and had to restart at a checkpoint – forcing me to re-do about five minutes of platforming. Then there is the game’s length, which is less a flaw and more a disappointment. The game is a little too short; I completed it in less than three hours. If I was motivated to complete the game entirely, as in collect all the Lo’a and unlock all the games achievements, then I might tack on another two hours to do so. So, you’re really looking at a five-hour game, and it’s up to you if that’s enough bang for your buck.

Skylar & Plux: Adventure on Clover Island looks to recapture the classic feel of 3D platformers from years gone by. Admittedly, there were some genuinely fun moments – I really like using the grappling hook and the Magnetic Glove provided some fun offense. Visually, the game looks good and the music is pretty much on point for these style games. The various glitches and technical issues were disappointing and the game’s length was a big letdown. The game had some challenging bits; there were times where I had to really think out my strategy to pass a section (especially in the third world). The voicework was a mixed bag; CRT had some funny comments but Plux was absolutely painful to listen to. Skylar & Plux: Adventure on Clover Island would be a decent choice for someone who has an afternoon to kill assuming they could overlook the game’s flaws. 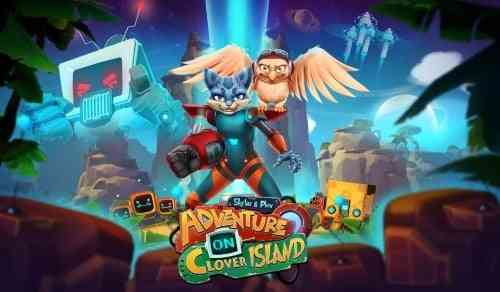