Tango Fiesta is a top-down, twin-stick shooter modeled after the action movies of days gone by. You play John Strong, a legendary soldier with enormous biceps, reliving your most glorious moments in battle. From the stages to the music to the dialogue, every element of Tango Fiesta is a love letter to the musclebound bravado of 80’s cinema. If you grew up watching these movies over and over again, or even if you’ve just recently been indoctrinated, Tango Fiesta will usher you back to those silver screen battles.

Every level is another beloved action film stripped down to its ‘explodiest’ elements. You start on the beach, in a recreation of the seminal action sequence from Commando. The game gives you the power to survive wave after wave of sunglasses-wearing goons, mowing them down with a seemingly infinite number of bullets. In truth, it’s your performance in battle that replenishes your stores of ammo and health, rather than good old movie magic. With some well-timed shots, you can keep up your killing spree for an eternity. Indeed, this feeling of god-like power more or less persists, up until the Robocop stage. Before this point, you’re the hero of your own movie, laying waste to untold hordes of nameless fools.

“I was a fast-moving, death-spraying murder machine.”

At first, you’ll be hard-pressed to find a better weapon than the one you start out with. The first few purchases you make at the gun shop feel like lateral moves, at best. It will take several buys before you stumble upon something to usurp the starter rifle. For me, that weapon was the Manuel. Essentially a laser shotgun, it cuts through bad guys like butter. I was a fast-moving, death-spraying murder machine. Up until I reached the Robocop-style stage, I felt like the baddest mother around. You might find a different gun that tickles your fancy, or you might stick with the game’s version of the AR-15. Tango Fiesta’s range of weapons feel distinct and well-crafted. Each gun has its own perks and downsides, and you’ll be sure to find your own way to tackle any level but that of Bionic Cop. 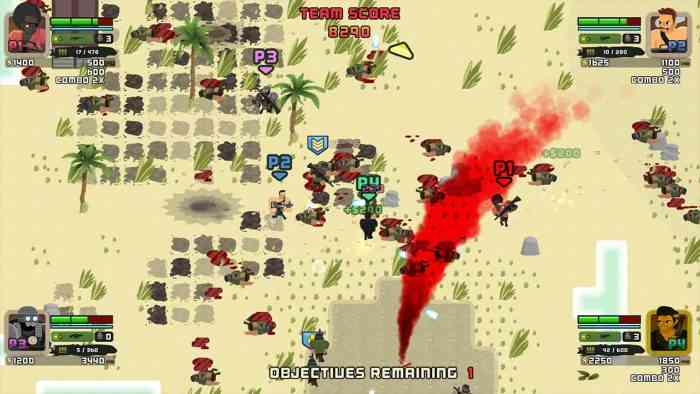 Do you remember the music from Commando? How about Predator? Even if you don’t, I promise it’ll all come flooding back when you play this game. Between the music, the sound effects and the superb dialogue, Tango Fiesta looks and feels exactly as an 80’s action film should. While the graphics are a simple affair, the music fills in the gaps. The first stage is a simple beach based on a single scene from a film that’s over 30 years old, but I knew which movie the moment I heard the music. On a similar note, the second stage is in a basic jungle. Yet I was immediately able to name the film after hearing one enemy’s death sound. Spilt Milk Studios takes iconic portions of famous films and distils these films into an essence pure enough to warrant immediate identification. I can’t speak for every level’s caliber of authenticity. During the Robocop stage, the constant explosions and re-appearing game over screens made an effective mask to conceal the music. What I did hear was faithful to the original film, however.

Great action films are marked not only by enormous muscles and fiery explosions but by the dialogue. Witty banter between two characters is perhaps the clearest sign of an action film’s inherent quality. Beyond all my complaints and lavish praises, I have to respect the writing on display in Tango Fiesta. Each scene manages to poke fun at established tropes, will not getting bogged down in those same tropes throughout the larger narrative. John Strong is a trigger-happy moron throughout, but the game never gets stale exploring his character. There’s just enough plot here to act as a vehicle for the many cheesy one-liners which are the meat of this game’s script.

“There’s just enough plot here to act as a vehicle for the many cheesy one-liners which are the meat of this game’s script.”

When you first start playing this game, you’re a god. You can’t be brought down by any one bullet and the stages feel like set pieces all lit up to showcase your martial prowess. The game gets slowly harder as you go, but you improve fast enough to keep up easily. Everything is going amazing until the Bionic Cop stage. An homage to the original Robocop film, I got so angry slamming my head into this stage I almost broke my controller. It felt like every action from every enemy stole over half my health. Destroying projectiles before they hit me was no impediment to my repeated extinction. Enemies seek you out from across the map to greet you with missiles and bombs. The most dangerous foes endlessly respawn like all the rest, ensuring you have a steady supply of murderous attacks approaching from every angle. The transition between difficulty levels feels sudden and unexplained. You go from a god to a hapless mortal in record time. Also contributing to a sudden case of mortality are grenades. The system that lets you throw them in any direction you like can have you drop them at your feet. It’s a minor complaint, especially since I never died as a result. But nothing makes you feel dumber than unleashing a mighty heave and having it sputter three feet ahead of you instead.

I like my action movie love letters fast-paced and gratuitous. In that respect, Tango Fiesta succeeds with flying colors. The combat feels like a sequence from a film in a way that has nothing to do with graphics. It’s baked into the tactile response from every gunshot. It’s painted with blood from the countless bodies scattered everywhere. It’s threaded through the soundtrack. This game feels like an action movie. Yet I hesitate to shout down from the mountaintops about it. Maybe I’m just too badly burned by the Bionic Cop stage. Maybe I wanted more from the gun shop. If nothing else, I’m going to dump many more hours into Tango Fiesta until I successfully finish the damn thing. The game is just too fun from moment to moment for anything less. 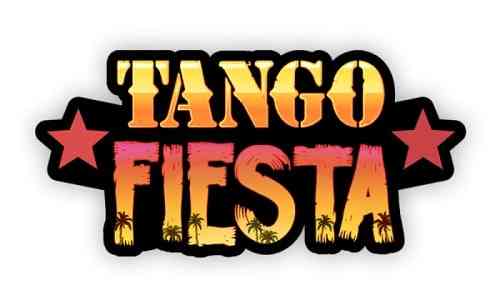