Resident Evil 5 Review – Re-Released For All The Wrong Reasons

Capcom has been consistently remastering Resident Evil games for over the past year now, and it’s been interesting getting to experience these notable games for the first time. The actual quality of these re-releases vastly differed as Resident Evil and Resident Evil 0 both were retooled significantly while Resident Evil 6 was basically the PC version ported to consoles. Now Resident Evil 5 has been released again, and sadly, it’s a lot more like the latter in that regard.

One of the reasons I was able to enjoy Resident Evil 0 was due to Capcom modernizing the controls of the 2002 survival horror game. It went from using incredibly stiff and awkward tank controls to playing like a modern game. The same can’t be said for Resident Evil 5, as it hasn’t been altered at all. It still plays like Capcom was trying to figure out how to make a third-person shooter, and it feels dated from the very beginning. I constantly had to fumble around with an archaic inventory system to quickly reload guns, or switch to a grenade. It’s as if Capcom didn’t watch the genre continue to evolve after the release of Resident Evil 4 in 2005 and instead rested on their laurels.

“It still plays like Capcom was trying to figure out how to make a third-person shooter, and it feels dated from the very beginning.”

Chris Redfield isn’t able to walk while aiming, as the series would have to wait for Resident Evil 6 for that gameplay innovation. Even simply watching Chris and his partner Sheva walk around the environment is incredibly awkward as they slide around the ground not moving like an actual human. Resident Evil 5 immediately feels incredibly dated and backwards for a title that is only 7 years old and that’s largely because it was behind the curve when it came out.

Resident Evil 5’s core hook at the time was that it featured cooperative play, and playing with a friend is still the best way to experience it. This isn’t due to the game being brilliantly designed around it, but due to the partner AI being awful in single player. I tried to play the game solo, but even on the game’s easiest difficulty my partner was continually getting killed by enemies leaving me to stare at game over screens. It was incredibly frustrating to be failing not due to my own play, but due to the computer just being awful. I quickly gave up on playing this solo and played exclusively with a friend. 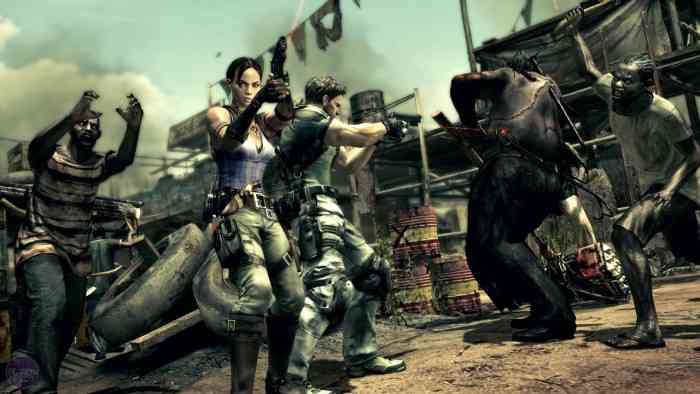 While the adventure is definitely better with a buddy, the experience wasn’t a fun one. Resident Evil 5’s campaign relies on throwing enemies constantly at the player, and never lets them breathe. Since the core gunplay feels incredibly stiff and awkward, it quickly becomes exhausting. Every level felt like it was built on the same formula: walk around, shoot dozens of enemies, solve a rudimentary puzzle and then get to an area where both players were needed to advance. There’s little variety and by the third of the game’s six chapters I felt like I had seen everything it had to offer.

Like the port of Resident Evil 6 earlier this year, Capcom has basically ported over the PC version of RE 5 to consoles. Since the game was clearly designed for consoles first and foremost, this doesn’t amount to a meaningful difference visually. Much like the game’s controls, Resident Evil 5 looks dated. It’s a step back from the Resident Evil 0 remaster earlier this year and that’s a bummer.

Nothing has been added that wasn’t in Resident Evil 5 to begin with, although all of its DLC is included here. Both story DLC chapters are locked from the beginning and only available once the player progresses through the story. This sucks for a remaster where many gamers are coming back to the game for a second playthrough. The actual quality of the DLC is fine, with the Lost in Nightmares chapter being one of the best in the game due to its focus on puzzle solving over combat while Desperate Escape is essentially 100% combat.

It’s incredibly disappointing to see Resident Evil 5 get such a bare bones release on modern day consoles. Capcom has shown in the past that they can add meaningful content (such as characters in Devil May Cry 4) and improve flawed releases, but this port does none of it. Instead, players are left with a heavily frustrating game that doesn’t deliver satisfying action yet focuses on that aspect. Resident Evil 5 had its time to shine in 2009, but even rose tinted glasses can’t save this game in 2016. 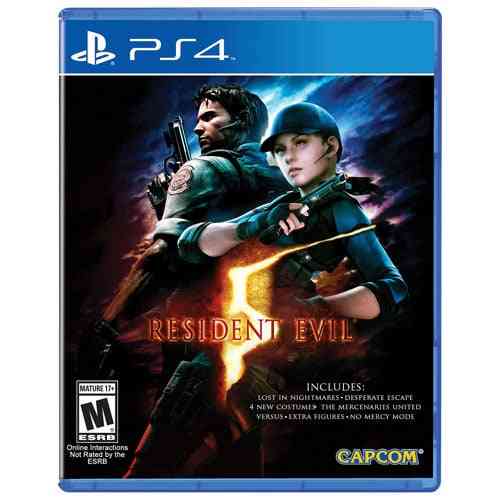