Remasters already face an uphill battle in today’s gaming climate, but Capcom has a pretty solid record with them. They’ve added significant content, such as new characters and difficulty options, to past releases, and have made already great games better on this current generation of consoles. That said, they aren’t miracle workers and Resident Evil 6 is a game that they couldn’t save even on the second try.

As a fan of the series who ended up skipping Resident Evil 6 when it released in 2012, I was actually excited to finally check out the latest entry in the main series. After all, my expectations were already low, and I wasn’t expecting anything special from it. Well, somehow Capcom has managed to disappoint even with a lowered bar, and Resident Evil 6 was worse than I ever expected.

Before I get into what Resident Evil 6 gets so very wrong, it’s worth applauding in a few areas. It’s obviously a very ambitious product, with it trying to tell four separate stories, and attempting to blend genres. The game also still looks gorgeous at times with some impressive artwork and a truly staggering amount of unique art assets. A lot of work clearly went into this game, which only serves to make it all the more disappointing. This wasn’t a cash grab, this was a labor of love that went completely off the rails. It’s kind of heartbreaking when you think about it.

“The landmark improvement that RE6 brought to the series was the ability to fire a gun and walk at the same time.”

The general gameplay, while certainly not good, is probably the least of Resident Evil 6’s problems. The landmark improvement that RE6 brought to the series was the ability to fire a gun and walk at the same time. While that certainly seems like a basic concept in 2016 (and was so in 2012), it was a huge change for Capcom’s beloved series. This mostly works out fine, and for the first time since 2005, Resident Evil feels like a modern action game albeit a heavily generic one.

The combat flirts with mediocrity, as there’s always some frustration around the corner. For example, something as simple as executing a melee kill on a grounded enemy quickly becomes troublesome as the attacks will miss even when you’re standing right next to them receiving a button prompt. The fact that Capcom couldn’t be bothered to fix basic detection issues despite trying to charge $20 again for Resident Evil 6 says a lot. 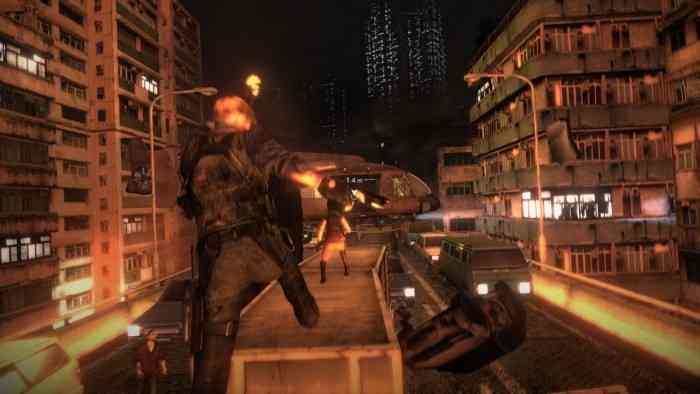 While the serviceable combat is a disappointment, the real issue is the level design. Resident Evil 6 has some of the most repetitive design I’ve ever seen in a game. Every decent idea or level segment is artificially lengthened by requiring the player to do the same exact thing multiple times. If you ever find an idea presented by RE6 to be clever, don’t worry as they’ll beat you over the head with it until you’re sick of it 10 minutes later.

There’s also just about zero pacing outside of the first 20 minutes of Leon’s story. The campaign design quickly bogs down to battle a room filled with enemies, run to an area where you’ll need your partner to progress, and then wait for them to show up. There’s almost never any moments that allow you to appreciate the game graphically, or soak in the atmosphere. Instead, the game keeps chucking meaningless enemies at you as you wonder why any of the events even matter.

“Resident Evil 6 is sometimes its own worst enemy, and it seems like it almost doesn’t want the player to have any enjoyment.”

Another issue is the complete lack of communication. Important gameplay mechanics, such as healing close to your partner to ensure you both get healed, are never told to the player. Instead, you’ll have to hope you see it in a tips section on the loading menu. Resident Evil 6 is sometimes its own worst enemy, and it seems like it almost doesn’t want the player to have any enjoyment.

The failure to communicate to the player can also be seen in the game’s baffling number of quick-time-events. As an Asura’s Wrath fan, I’m not against QTEs when they’re done correctly, but that just isn’t the case here. A recurring one in particular is more difficult than the rest and will require players to rotate the analog stick in a circle. You’re actually supposed to rotate both sticks, but the on-screen indicator only shows one, so expect some cheap deaths due to more miscommunication.

Resident Evil 6 ultimately becomes a slog. Awful level design, repetitive structure, and mediocre gameplay plague all four of the game’s campaigns. Making matters worse, players can’t even pause the campaign levels when playing cooperatively online. That wouldn’t be a huge drawback, but the chapters generally take around an hour to complete. It’s just one more frustration to remind you that you’re not playing a well designed game.

Perhaps most baffling is that you can only have saved progress in one campaign at a time. If you want to play some of Chris Redfield’s story after being frustrated by Leon’s campaign, then you’ll ultimately just end up angry since you’ll have to play parts of Leon’s story over again unless you stopped right after a chapter’s end point. It was a ridiculous saving system in the first game, and the fact that it’s still present here is even more of a bummer. 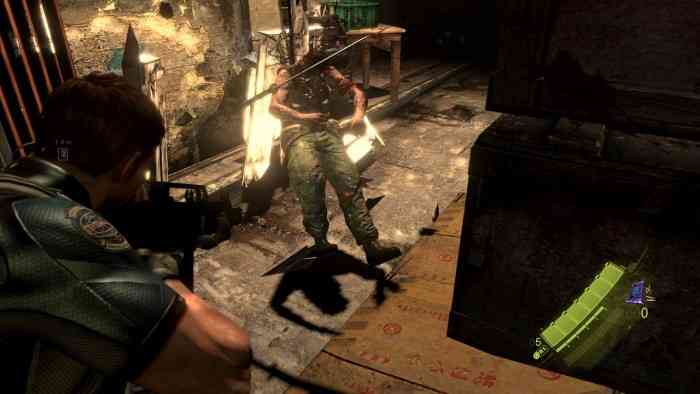 Maybe it’s because I’m a terrible friend, but I did have a bit of fun playing the game with a partner cooperatively. This was less about the game, and more about the fact that I got to commiserate with someone else who was equally as frustrated. It’s a bonding experience, and by the end you’ll feel like you went through something together. Sure, it’s something you’ll never speak about, but you can look at each other and know the pain you’ve suffered.

You’ll know how terrible it was when you played Ada Wong’s story and got stuck on one of the game’s very few actual puzzles for 15 minutes. You’ll know how ridiculous it is that every single door in the Resident Evil universe requires two people to open, and you’ll know just how stupid the game’s plot made Redfield to be. Most of all, you’ll know deep inside that you wasted 20 dollars on this wretched game.

In some ways it’s impressive that Capcom had the gall to re-release Resident Evil 6 and try to get gamers to fork over money again for the same poorly made product. Hopefully consumers won’t get fooled again as they definitely did the first time around considering that RE6 is Capcom’s 2nd best selling game ever. This is the best version of a very bad, fatally flawed product.