NHL 17 Review – Like Ovy and Kane, EA’s NHL Still Has The Moves

To those who are new to EA’s NHL game series, a bit of background: in 2015, NHL released on the latest-gen consoles to mostly disappointment. Many of the game’s modes had been stripped-out, leaving a lot of longtime fans feeling cheated. Then, last year, NHL 16 represented a comeback of sorts – modes were brought back, new features were added, and EA made a long-term commitment to stay in touch with fans and listen to feedback.

Now NHL 17 is here, and with the franchise now moving in the right direction, fans are looking to see what further improvements EA will make, while still keeping what is working. It’s always a delicate balance – you want to keep the game fresh, but you don’t want to fix what ain’t broke either. Overall, players will find that NHL 17 brings some nice tweaks, some new additions, and few of the same annoyances. It’s still gaming’s best hockey sim, but those who already own NHL 16 might struggle to find reasons to shell out for a new game this year.

“It’s still gaming’s best hockey sim, but those who already own NHL 16 might struggle to find reasons to shell out for a new game this year.”

First of all, there are the graphics. When I played NHL 16, I wondered how EA could make the animations and look of the game any more real – I mean, if you walked in on someone playing the game, you would actually think they were watching a televised hockey game on NBC. But amazingly, EA has somehow managed to make it even more realistic this time around. First of all, player animations have been upgraded, with more moves and more fluid movement. You see this most of all with goalies – they now show much more variety in their save animations, flicking their trappers out and hugging the goalpost just like their real-life counterparts. Sometimes, graphical upgrades are so subtle that you don’t even notice them; that is not the case with NHL 17’s visuals – you’ll see the difference as soon as you begin to play.

Game commentary though, while still being solid, doesn’t sound much different from last year. In some cases, I felt like I was hearing the same lines from NHL 16. Eddie Olczyk still likes to refer to “that area” of the ice with every other comment (can’t they bring him in to record a few extra lines, referring to “the slot” or “the neutral zone?”). Play-by-play is still sometimes lagging a bit behind the play. And it might be just me, but I felt like the commentators were a bit quieter this year, not speaking quite as much. If that is the case, it was the only real difference I noticed in the sound this time around. 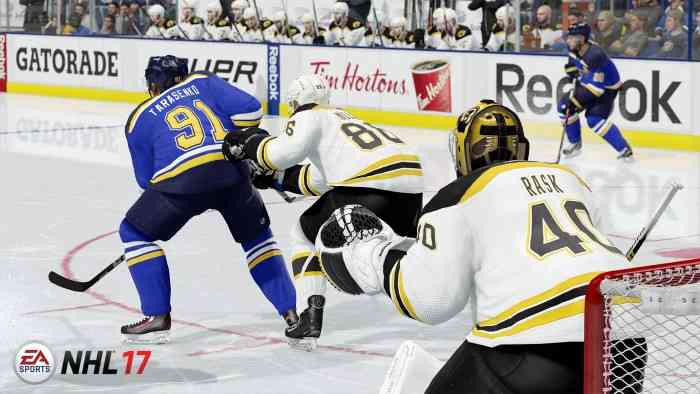 With last year’s iteration, EA brought back all the fan-favorite modes, making the NHL series once again gaming’s deepest hockey sim. This year, there simply wasn’t much more they could add, so they can hardly be blamed if NHL 17 looks a lot like its predecessor. Hockey Ultimate Team, Season Mode, Be a Pro, EASHL, they are all back this year in pretty much the same form. A few have been redesigned; most notably, Be a GM mode is now Franchise mode, and has been made much deeper. You now make decisions about everything from the arena’s look to promotional giveaways to even moving the team to another city if circumstances demand it.

Other modes have been deepened as well, and in ways that will please some hard-core fans, but maybe scare away others. Hockey Ultimate Team, in which you open packs of cards to build up the best team possible, was already a bit complicated for my simple mind to handle back in previous versions, but this year it is somehow even more intimidating. You now have to think about Synergy, and pair players with similar skills with each other. And in the new Dynamic Sets aspect of HUT, you collect sets of cards to unlock rewards and abilities, in a way that is modelled on the crafting of other games. HUT is all about whether you are lucky enough to get that great player when you open a pack; the fact that it tends to encourage in-game-purchases might rub some the wrong way.

“To be honest, I found all the layers of some of these modes to be a bit intimidating – and I fear that many newcomers might just avoid them altogether.”

Micromanagers will also like the new Creation Zone Team Editor. You have a lot more freedom now to design your team’s logo, and even celebrations. EA continues to add more and more to the NHL series, making it less a game over time, and more of a pure simulation. Lots of the veterans will be thrilled with the extra depth; in my case, to be honest, I found all the layers of some of these modes to be a bit intimidating – and I fear that many newcomers might just avoid them altogether.

But fortunately, NHL 17 is like many games in one – if one mode doesn’t appeal to you, there will be others that you will love. I was glad to see my personal favorites, Be a Pro and EASHL, back this year and actually improved. In Be a Pro, you can now see your milestone moments, such as your first NHL goal, punctuated with more elaborate presentations. It was a feature that was badly needed and it would be great to see EA add even more to make this mode play like a first-person story. The one area it still needs work is on the defensive side – I kept getting low scores for my defensive play, but the feedback didn’t really tell me how to bring my marks up. It is still a blast to work your way up from the minors to the heights of NHL success, though, and it continues to be the closest thing you can get to actually living a hockey career – all from the comfort of your sofa. 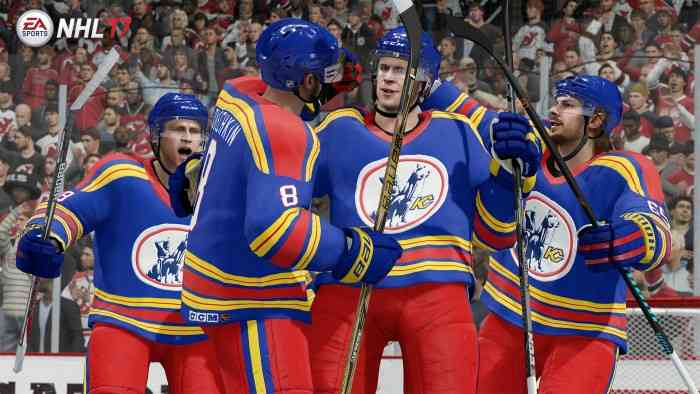 EASHL is another standout mode that has been made even better in NHL 17. You can still drop in and start playing with random players online, as well as play with your friends. Now, there are player Classes, such as “Stay at Home Defenseman,” that add a bit of nuance to your on-ice tendencies. But the one new aspect in EASHL I like the most is the progression system. Every EASHL game you play gives you XP with which you can level up, earning rewards like new equipment and animations. It gives this already-strong mode even more appeal, and if you play NHL 17 without trying the EASHL mode, you are missing out on a fun experience.

Now, if you’re familiar with EA’s NHL series, you might have noticed that both my favourite modes are ones where you are locked into playing one position. That’s no coincidence, because ironically, I have found the regular, team vs. team modes – such as Season mode and the new World Cup of Hockey mode – to be the series’ weakest element. Unfortunately, NHL 17 shows the same frustrating gameplay tendencies in this area as previous iterations. For example, cycling from one player to the next is an inexact science, to say the least. The game’s algorithm chooses the closest logical player to the puck, which might be the one you wanted, but is sometimes not.

“If you haven’t played EA’s NHL series yet, then you need to get NHL 17 now. It is an astoundingly-detailed, immersive hockey game that has something for every type of player to love.”

I also still have trouble with the way the game handles post-save goalie control. In NHL 17, if you release the puck after a save, you run a very good chance of the opposing player stealing it, and even scoring. Because again, unless you can select the right skater quickly to be there when the puck is released, you’ll see him skate right past it stupidly. After a bunch of cheap goals scored against me this way, I learned to just smother the puck every time for a whistle  – not something you’d see in most real games.

So yes, gameplay has its moments of irritation, but there is lots to like as well in NHL 17. Using the stick control (once you get used to it) is intuitive and smooth. You quickly and easily start to feel like a real hockey player, making wrist shots and slapshots with ease. That’s partly thanks to the game’s On-Ice Feedback feature, a game-changer from last year that is not only back in NHL 17, but even better. EA has really created an effective system for helping players get better, with detailed pointers both on the ice and after each period. It’s not just fluff either; taken as whole, the On-Ice Trainer works like a never-ending tutorial, and you will see concrete results in your skills if you use it. It’s also masterfully integrated into the game, so it doesn’t become obtrusive or tiresome (and even if it was, you can turn it off). 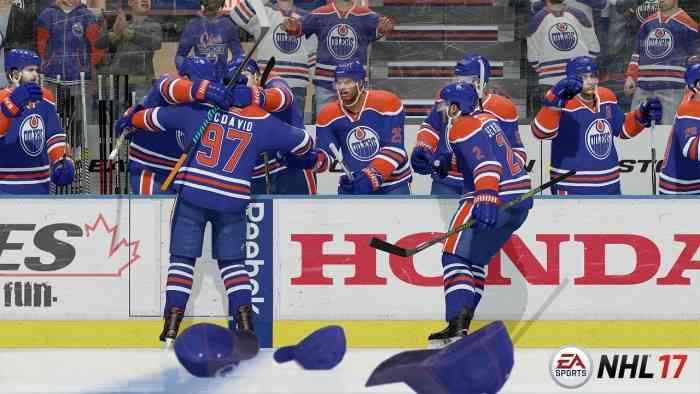 If you haven’t played EA’s NHL series yet, then you need to get NHL 17 now. It is an astoundingly-detailed, immersive hockey game that has something for every type of player to love. I personally recommend checking out EASHL, which feels so much like being an actual player in a pick-up game, you’ll almost start to think you’re good enough for the real thing (and at least once, try playing as a Goalie, which is a totally-unique experience in itself).  This series was already deep before, but NHL 17 brings a level of detail that will please lots of fans – even if it is overwhelming at times.

If you are already an owner of NHL 16, though, it is a tougher sell.  Other than the addition of the World Cup of Hockey mode, which is essentially Season mode but with the countries in the World Cup of Hockey, this is pretty much the same game as last year. It has been upgraded and polished, for sure; but whether that justifies purchasing a whole new game is questionable. Last year, I had no hesitation in recommending that you buy NHL 16. This year, as great of a game as NHL 17 is, you might want to stay on the bench for this one. 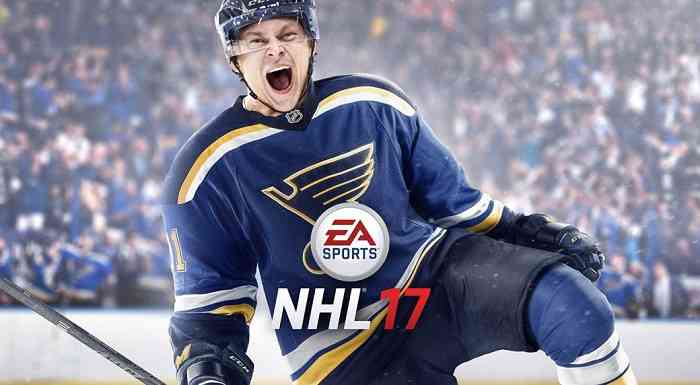 NHL 22 IIHF Patch Introduces Playable Women’s Teams And More
Next Call of Duty: Black Ops 3 Salvation Review – IW Has Their Work Cut Out For Them
Previous Tempest Review – Fumbling at the Rigging