When the words Super Meat Boy are spoken, they convey a certain connotation and the subconscious automatically reacts. A reflexive echo of masochistic, tedious, and frustrating bubble up in response. Super Meat Boy is all of those words, but it’s also rewarding, satisfying, and challenging and a lot of people tapped into those qualities. Flywrench is the newest addition to the growing list of masocore games and it playfully tips its hat to the jerks that spawned it while bounding balletically through the solar system.

It’s such a simple concept that quickly snowballs from quirky platformer to nightmarish hellscape. And I say that in the most endearing way possible; Flywrench is great. It’s made by Messhof, the same weirdos that brought us Nidhogg, and it has you controlling a squiggly line of a ship that has to get from one end of the level to the other. Of course in your way will be any number of towering obstacles that will end whatever momentum you have going, and they’ll do it without a lick of remorse.

The controls are so tight (albeit a bit obtuse at first) that spending any extended amount of time with Flywrench will bring about a sort of meditative experience where the line between you and the game begin to blur. That’s the deal with these sorts of games. The deaths are so frequent that after a while you stop getting upset, and your focus becomes so sharp that deaths don’t mean anything anymore; they’re accepted as part of the experience. The game becomes an exercise in control. Can I make this little thing do exactly what I want it to? And of course, the answer is yes if you have enough patience.

“It’s amazing how Messhof has transmuted the very basic activity of controlling a little bendy line through a minimalistic level, into the feeling of being some kind of superhero.”

The mechanics are straightforward: Fly to the exit and when a colored line impedes your way, match its color with your ship’s and fly through it. But obviously, these levels get outrageous fairly quickly. They’ll have you navigating tight corridors with a surgeon-like level of dexterity, balancing your ship between walls and rotating lines that intersect like kaleidoscopic Venn diagrams. And like most good games, Flywrench has hidden layers of depth that will allow you to navigate the levels with greater control. One example; changing the ship green will put you in a rotating state where level geometry won’t kill you, and in fact, you’ll bounce off walls which allows for faster navigation or a last second shot at saving your own life when hitting a wall that otherwise would have killed you.

The art style goes for a sort of busted and glitched out pixel vibe. The whole game is made of simple lines, but there are neat effects blowing out the back of your ship, or exploding out of you when you haphazardly flip into a wall. Like most aspects of Flywrench, it’s simple but effective. 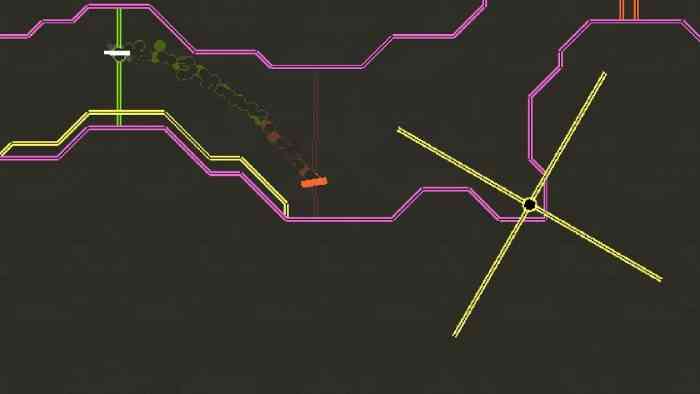 And the music… oh the music! Flywrench somehow got hold of one of the best lineups in video game soundtrack history. We’re talkin’ tracks from Daedelus, Baths, and Machinedrum among others. It’s stacked and hits you with one of the tightest jungle and drum and bass soundtracks I’ve ever heard. Just listen to that Daedelus track, it’s the opener and nicely examples what you’re in for. It would be not one word of exaggeration to say that the game is worth the price of admission for the soundtrack alone. And these tracks don’t just sound good, they service the frantic action on screen as well. Pulling off some tight shit just feels so much better when it’s soundtracked by Machinedrum.

Flywrench is a treat. It’s amazing how Messhof has transmuted the very basic activity of controlling a little bendy line through a minimalistic level, into the feeling of being some kind of superhero. When the music is hitting just right, and you’re flipping through those colored gates at breakneck speeds the game feels somehow important. Like getting to the end of the level has something riding on it. Then you remember that you’re just flapping a little line around the bare skeleton of a game… which makes the illusion all the more impressive. 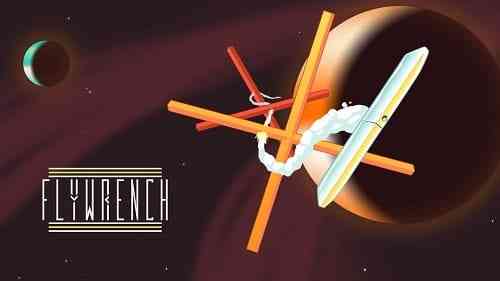