When we think of innovation in games, the Shoot ’em Up genre isn’t exactly the first that comes to mind. There really isn’t much need either. From their appearance in arcades long ago to present day, it’s a style of game that still holds up remarkably well. However, that doesn’t mean that there is no room for at least trying something new. With that in mind, let’s take a look at Dimension Drive from 2Awesome Studio. Dimension Drive offers up something “new” in the form of being able to swap between one of 2 screens.

The story revolves around Jack and her ship the Manticore. The ship has the ability to jump between dimensions which is important in defeating the… well it’s a shmup so are we really concerned with the story here? Just know the ship can instantly swap between two different dimensions, represented by two simultaneously similar but not entirely the same levels at the same time. I know the story isn’t highly important to the genre, but there was a rather interesting part where Jack encounters Sven from the game Drifting Lands. It was a bit odd as it wasn’t even tied into the story in any way–he’s just a guy from another video game there to upgrade Jack’s ship.

Odd cameos aside, let’s dig into the gameplay. With the Manticore’s ability to swap dimension, the game plays out over two separate screens. Players will bolt back and forth between the two to avoid obstacles and/or enemies. That’s not the only trick the Manticore can perform–there is also the ability to stop and reverse as well as the dimension shift. The dimension shift is more of a horizontal slide to pass through objects, but still keeps players on the same active screen. Used in conjunction with one another, it’s a host of toys to play with that mostly come together fairly well. 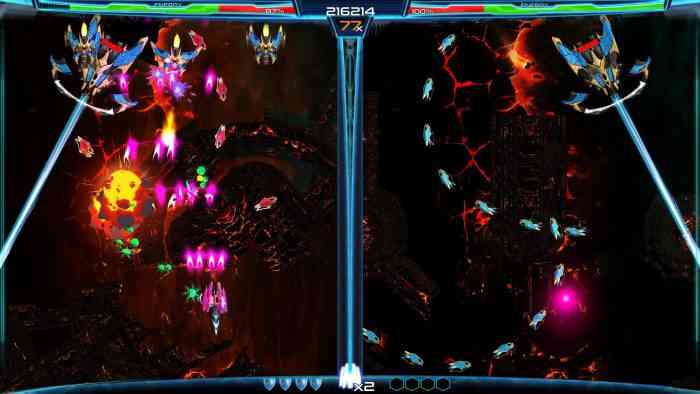 The problem is that players only start out with just the dimension drive. Coming to grip with these abilities can be a frustrating experience. Normally a few levels to play with each to come to grip with the mechanics works well. Here, however, it doesn’t seem to be the case as none seemed to really gel till all were present at the same time. In trying to “teach” the dimension drive jump, levels seem to demand some real pinpoint precision at times and made the game feel less like a vertical shmup and more like a pixel-perfect platformer. Precision is ok, but on the Switch, it encounters two main problems.

These both can be experienced in trying to play the Switch in handheld mode. Obviously, the screen is going to be a lot smaller played this way and coupled with the rather short throw of the sticks on the Joy-Cons this can make such exact precision far more difficult than it is other ways. When docked this was not nearly the issue that it is in Handheld mode. However, that wasn’t the only control related issue. The controls are all mapped to the face buttons, the tight grouping of the X, Y, B and A buttons on the right Joy-Con lead to quite a few wrong presses. Enjoy that the 10th time you accidentally jump into a rock instead of what you really were trying to do. While not required, the wired or elite controllers seem like a much better option here. 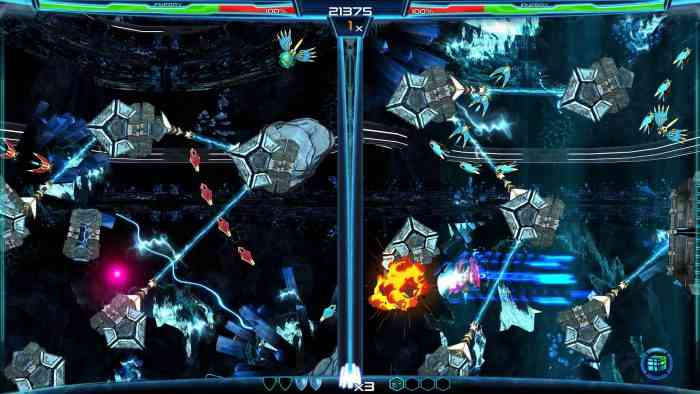 Those issues aside, Dimension Drive does offer some good ideas. The side swapping action has some real potential but seems to get throttled by the ability to completely stop and flip the ship in the other direction. This is great for shooting enemies that have gotten behind you, but of course, stopping the action to position yourself for a jump doesn’t feel very shmup-like.High-speed flip-flops become decidedly less fun if your able to just essentially pause the movement. They are necessary though because of the level design. Tight corridors and reign far more often then open spaces, yet the most fun areas were open space requiring jumping between a “ladder” of lasers. The tight spaces aren’t bad, but occasionally they are made worse by foreground and backgrounds that aren’t always easy to differentiate, causing some needless explosions.

Dimension Drive does offer up some compelling ideas to vertical shmups, but the focus seems to be too much on those aspects. The actual shoot ’em up part is merely ok at best. It’s less about shooting, although there is plenty, and more about trying to navigate a maze; the shooting and enemies feel secondary. It plays more like an entirely different game that looks like a traditional shmup, instead of a shmup with some different mechanics. It’s a decent game, just maybe not what you might be expecting.