The world is a wasteland. Every day is a struggle to survive. You and the other renegade fighters must band together to seize control and take back your lives in a seemingly endless war. Star Renegades is a tactical RPG featuring an innovative new turn based combat mechanic that blends well with its overworld exploration. The pixel aesthetic is finely detailed and cements itself with a healthy dose of nostalgia mixed with modern conveniences. Curious what this looks like in action? Check out our gameplay from the E3 floor below.

Star Renegades is a tactical RPG experience that offers the chance for up to 6 v 6 combat. Actions are turn based, yet each action has its own amount of time to prepare and attack with as displayed with the timeline bar at the bottom of the screen. This gives players a visual representation of who will attack when and adds new depths to strategies in counter attacks and parries. Outside of battle, the party can explore the environment and discover new ways to try and stop the enemy. The game also features many rogue-like inspired features so you’ll want to keep the party equipped and healthy at all times for fear of losing your comrades. 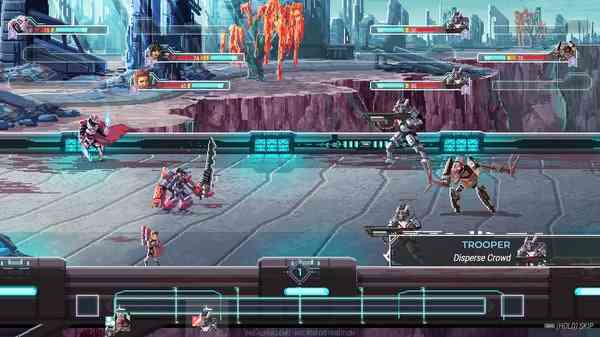 Star Renegades is set for release early next year on PC. Are you interested in checking out this game and fighting the good fight? Let us know what you think on Facebook, Twitter, or the Comments section below. For more information, check out the game’s official website.

Journey of the Broken Circle Review – A Tale of Self Discovery
Next New Weapons, More Loot and New Characters Shine in Borderlands 3 Gameplay Video
Previous Cyber Shadow Gameplay: Bringing the Pain with a Salute to Ninja Gaiden