The category of space combat/flying sims seems as vast as space itself. There are a ton of them. Some, such as Star Wars: Squadrons, are bright examples, whereas others are desolate and lifeless. Chorus is somewhere in between; not game-changing, but not terrible either.

Chorus is about the journey and redemption of Nara, an interstellar spacecraft pilot. She has a connection with a sentient spaceship called Forsaken. As part of a radical space-cult called the Circle, Nara had done some terrible things, so she exiled herself. After Nara’s new home was attacked by her former cult, she gets dragged back into the fight and pilots Forsaken once again. 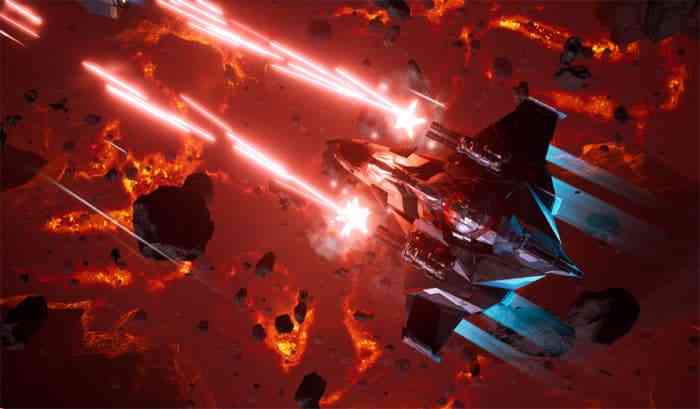 The game has a ton of backstory and lore to the game, however it is quite dry and might not all get picked up by players. The story told through radio chatter, dialogue between Forsaken and Nara, and Nara’s own internal monologue.

Forsaken has a few different weapons that can be upgraded throughout the game. Nara also has several abilities herself, which allow her to better control and maneuver her ship. The enemy ships have a great sense of speed, but at most times, Forsaken does not. The missions pretty much all involve combat at one point or another. The trouble with that is that the combat is not as tight as we need it.

For Chorus to rely on the combat to carry this game, the controls need to be better. Forsaken lacks any sort of targeting assistance beyond a reticle, which would not be a problem if enemy fighters were not so nimble. The environments, while beautiful, also do a lot to obstruct enemies and objects, making some fights tedious and frustrating.

While there are issues, such as pacing, there are stronger suits that Chorus has, like its score and visual effects. It’s up to you to figure out if it all balances out in the end.