Yoshi’s Woolly World is another solid platformer in the Big N’s stable. It’s like Yoshi’s Island, New Super Mario Bros., and Kirby’s Epic Yarn made a little, knitted baby together. It’s a side-scrolling 2D platformer, where Yoshi travels from left to right, and finds many secrets along the way. There’s no time limit, or points, so it’s definitely not as frantic as New Super Mario Bros. U. Gameplay involves struggle-floating, eating bad guys, pooping them out as yarn balls, and throwing those yarn balls at other enemies. The yarn balls you throw could also create new platforms, gather items, reveal secret areas, etc. Gameplay is very similar to Yoshi’s Island, except, instead of having a baby Mario fly away from you, you actually have hit points.

Admittedly I wasn’t overly excited for Yoshi’s Woolly World, because I found its predecessor, Yoshi’s Story, to be too short, easy, and forgettable. Bucking that trend, Yoshi’s Woolly World is fun, long, and challenging (at times). Beating levels is usually a pretty easy task; you rarely feel threatened. Obviously the game is geared at kids, but unlike the disappointing Yoshi’s Story for N64, this game has taken in account the hardcore platforming fans. Controls are tight, and responsive; I never felt betrayed by them.

Every level has collectibles (5 flowers, 5 yarn bundles, 20 stamps) so the real challenge isn’t in beating them, but in finding all the collectibles along the way, and finishing with a full health bar. There are rewards for finding all of each collectible in each level so it’s something you’ll want to accomplish. Each of the game’s 6 worlds has 8 levels. If you find all 40 flowers amongst those 8 levels, you will unlock an always awesome and challenging 9th level. If you find all 5 yarn bundles in a level, you get a new Yoshi to use. Every single level has an optional Yoshi, so you can change up your image. These Yoshi designs range from Mario-colored, to shy guy-masked, to watermelon patterned. And for the OCD among us, the stamps you collect actually give you stamps which you can post in Miiverse. If you’re the type of platforming fan who likes to look for secrets, and collect items, this game is for you.

Gems can be collected as in-game currency in each level. These gems can be spent on power badges, which give Yoshi fun powers like bouncing out of pits (instead of falling in them and dying), or spitting infinite amounts of watermelon seeds. Sometimes the game lets you use one of these for free, which provides a great opportunity to experiment, before spending your hard-earned gems. There are also sections of the game where Yoshi transforms into mutant versions of himself, like Umbrella Yoshi, Giant Yoshi, and Motorcycle Yoshi. These are timed sections, found within levels, that offer completely different platform-like game experiences, for short sections. For example, motorcycle Yoshi moves extremely quickly, and can travel on upside down, and vertical surfaces, making you feel like you’re playing something based on Sonic The Hedgehog, as opposed to Super Mario Bros. At the end of each level, there’s a ring to jump through, and if you time it correctly, you’ll get to play a bonus game that will gain you more gems. All of these additions keep the adventure feeling fresh, when it otherwise might have gotten stale. 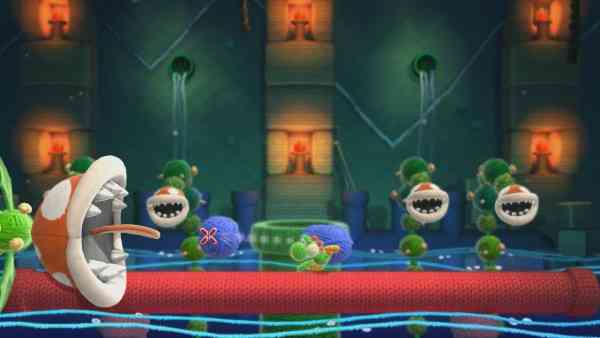 There’s also an option to turn on Mellow Mode at any time between levels. I thought Mellow Mode was going to be the equivalent of an “easy mode”, but it really changes the gameplay, and gives you a fun, second option. Yoshi gains wings, which allow him to infinitely hover at the same height. This makes it feel like playing Super Mario Bros. 2 with Princess Toadstool, instead of the usual Luigi option. So sure, it makes the game easier, but it’s also fun to play/ experiment with (especially if you’re backtracking to get missed collectibles).

The Woolly Yoshi Amiibo, that some copies of the game comes with, can be used at any time, mid-level, to turn on/off a second Yoshi. The second Yoshi can be useful, because you can eat him, and throw him as a yarn ball; you can also jump off him, and have him throw yarn balls for extra projectiles. But having a second Yoshi is also hazardous, because it’s easy to lose track of which Yoshi you’re controlling; this led to a surprising number of pit deaths for me. But a tap of the Amiibo can get rid of the second Yoshi, and you can turn him on and off as much as you’d like each level.

“If you’re the type of platforming fan who likes to look for secrets, and collect items, this game is for you.”

Co-op mode functions similarly to the Amiibo. It can be turned on and off before any level. The second player gets to be a second Yoshi, and you have the same advantages and disadvantages of playing with an Amiibo. The difference is that the Amiibo copies your moves, while player 2 can do whatever they please. Player 2 is also a different color, which helps a lot to distinguish between the two Yoshis on screen. You’ll still be knocking each other into pits, and waging accidental Battletoads-like war on each other, however.

Sadly, playing as Yoshi, just isn’t as challenging as playing as Mario. A lot of threat is taken away, when you can float over bottomless pits, and throw yarn balls from a distance. I enjoyed Yoshi’s Island, but never to the level that I enjoyed Super Mario World. If you absolutely loved Yoshi’s Island, then Yoshi’s Woolly World is a must play. The basic 48 levels can get repetitive by the end of the game, in their design, but those bonus 9th levels in each world are fantastic, and there are lots of bonus gameplay modes to keep things fresh. Bosses are also painfully easy. I was hoping for some giant, epic challenges at the end of each world, but sadly, they were all a cinch. 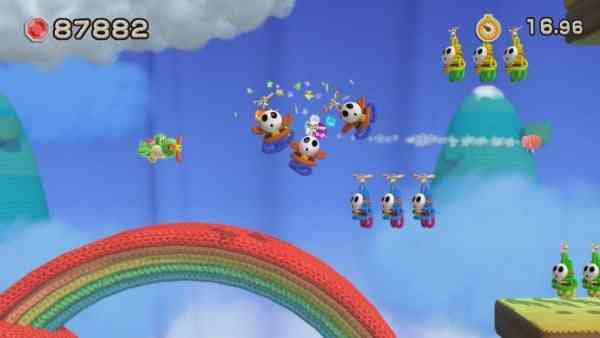 Personally, I’m not a fan of the yarn theme. Maybe it was Nintendo’s attempt to hit the hipster, baby, and elder demographics, but it just wasn’t what I wanted. Still, the game does have great “yarn mechanics”; shy guys have crochet hooks, Yoshi’s feet turn into propellers when he swims, etc., but because this is the first home console Yoshi platformer we’ve had in 17 years, I would’ve preferred a straight-themed game. This problem is similar to the one that Super Mario Sunshine had when it was released. It was a great game, but many were turned off by its vacation theme. Since Yoshi’s Island was coloring book-themed, and Yoshi’s Story was popup book-themed, I guess a yarn theme isn’t that strange though. And the yarn does look good. There are times when I was wondering if I was looking at rendered photographs of real yarn creations, instead of game graphics. The whole game’s also insanely cute. Nothin’ wrong with that.

The sound in this game is very good. Sounds we all know and love from Yoshi’s Island and Smash Bros. The music is like elevator music, or the stuff that gets played when you’re put on hold, but I really liked it. It has a strange kind of chill groove that doesn’t exactly scream “children’s game”, or “yarn theme”, but more “Wii menu” or “the Japanese are at it again”. I enjoyed it; others might not. The score definitely fell short of classic whistlin’-down-the-street Super Mario themes however.

Yoshi’s Woolly World is a very good platformer. It’ll take you 15-20 hours to do everything, and it’s enough fun that it’ll probably get you wanting to play it again in a few years. It has solid Nintendo production values, retro platforming, and is appropriate for many ages and tastes. Despite some repetitive levels, and easy bosses, Yoshi’s Woolly World is highly recommended.

*** Review copy provided by the publisher *** 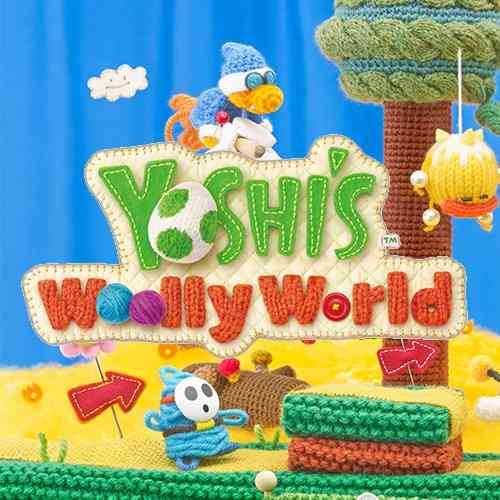 Legend of Zelda: Ocarina of Time Now in World Video Game Hall of Fame
Next Astro A50 Wireless Headset: Xbox One Edition Review – A Good Headset at a Somewhat Hefty Price
Previous Samurai Warriors 4-II Review – Not Quite a Sequel nor an Expansion