Astro A50 Wireless Headset: Xbox One Edition Review – A Good Headset at a Somewhat Hefty Price

Astro Gaming has been producing some pretty good headsets over the years, as evidenced when MLG started using them as their go-to headset for eSports tournaments. Since then headsets have come and gone in the eSports circuit, but if one thing remains though it is that Astro has a great reputation for their products. With the advent of the current generation of consoles, gamers have required more complex headsets given the sound that goes into a videogame including a lot of voice dialog, booming sound effects, and surround sound. Astro’s current top of the line headset is the A50, a 7.1 Dolby Surround Sound wireless headset that was first released in 2012. Since that time it has seen a few revisions, including an Xbox One version that was released earlier this year. We have had the Xbox One unit for a couple of months; however, there was an issue with it and only recently were we able to resolve it allowing us to give the headset a thorough test. What we found was a headset that is comfortable, has solid sound, and allows us to game without bothering others. 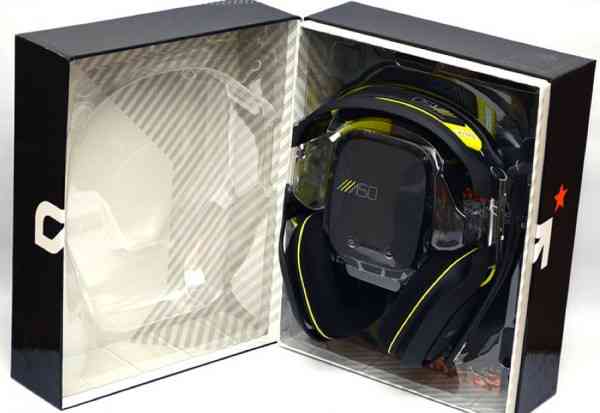 From the first moment I took the A50 box out of its sleeve to open it I knew that this was not some cheap product. Inside the box is a lot of stuff, including the headset, wireless MixAmp transmitter, display stand, optical cable, micro-USB cable, Xbox One chat cable, and a quick reference guide. Everything you need to get the headset up and running is in the box. As the A50s are wireless they are already paired up with the wireless transmitter, so there is no need to fiddle in this area. It’s as simple as hooking the included fibre optic cable into the wireless transmitter and Xbox One, plugging in the USB/power cable into your Xbox One and away you go. Make sure your Xbox One sound settings for the Fibre Optic cable are to set Dolby Surround Sound too.

The build quality of the A50s is second to none. When holding them they look and feel like a superior product. The black with neon green highlights looks good and the build materials look the same. The 13oz weight is evident though, and they are heavier than my current go-to headset that I have been using over the past 10 months (Turtle Beach Stealth 500x). That being said, once I put them on they hugged my head comfortably and felt like they wouldn’t come off too easily. The weight was noticeable at first, but after some time I didn’t even think about it. They adjust quite nicely too.   I even put them on my 9 year old son, and although they were monstrous on him, he could wear them if he had to. 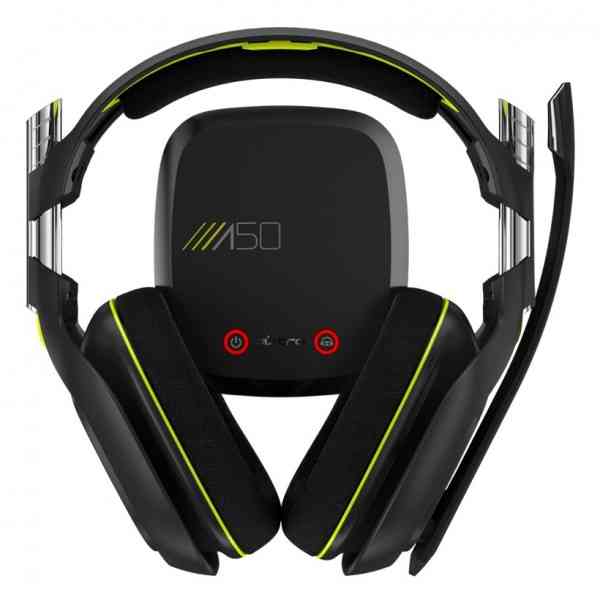 Although the A50s Xbox Edition is listed as wireless, that is not 100% true. You are still tethered to the Xbox One controller, either by the Xbox One Astro chat adapter that is included in the box, or by an Xbox One branded adapter. The new Xbox One controllers now have a 3.5mm jack built in, so you can opt in to plug in this way too. Regardless though, you are wired to the Xbox One controller which does not make them 100% wireless. I am not privy to business deals or how licensing works, but I wonder if and when Astro might be able to work out a licensing deal with Microsoft to incorporate the Xbox One wireless technology like Turtle Beach did for their some of their Xbox One headphones. That being said, maybe this Turtle Beach has exclusivity on this tech.

The earcups have nice breathable cloth wrapped padding.  The left earcup houses the charging port as well as the plug for the chat adapter. You’ll also find a non-removable boom mic for voice chat. When the mic is in the “up” position it is muted. Once you lower it for gameplay chat it becomes active. It doesn’t seem to have any mic-monitoring as I never noticed any when using it. This is very different from the 500x which has three levels of mic-monitoring. The right earcup has the majority of the sound controls, including a switch for the equalizer modes (Media, Core and Pros). Media mode is meant for movies or music, the Core mode is meant for everyday gaming use, while the Pro mode has been designed with multiplayer play in mind. Astro says that the Pro mode allows for high frequencies to be more prevalent allowing you to get a ‘bead’ on those you are battling against. I wasn’t a believer at first, but switching between the Core and Pro mode there was a noticeable difference as there were more “highs” in Pro then in the Core mode. If it made me a better gamer, I can’t 100% agree, but there were notable sound differences. There is also a master volume dial on the right earcup, as well as controls on the outside of the cup that allow you to mix your game/chat volume. Overall, all the controls on the right earcup are functional, but they take some getting used to. I found that I had to take the headset off to change the EQ to where I wanted it as I couldn’t always find it.

So, the million dollar question is: “How do the A50s sound?” Well, they sound good, plain and simple. Audio stays in the earcups and the outside world isn’t bothered. I played a variety of games including Destiny, Forza Motorsports 6, Castle Crashers Remastered, World of Tanks: Xbox One Edition, and Gears of War: Ultimate Edition. I have to say that after using these headphones when gaming I am pretty impressed. From the subtle sounds (e.g. the sound effect when a Titan is ready for a shoulder charge), music and weapons in Destiny, to racing around Sebring Raceway in a Nissan GT-R black during a downpour, to the sounds of my tank rolling through a destroyed village in World of Tanks, it’s all impressive. I have to say that given how I have enjoyed the Turtle Beach headphones over the past 10 months, I didn’t think I’d again be impressed, but I was.

“Overall, the Astro A50 Wireless Headset Xbox Edition is a darn good headset. Its battery life is decent, it’s solidly built, comfy to wear, and it really does sound good and that is what counts.”

If there is one word I can use for the overall sound, it is “impactful”. The way that the various class of guns sounded in Destiny, how each car I used, and raced against, in Forza Motorsports 6 and how their engine sounds were reproduced, to the way a light tank’s tracks sounded versus a heavy tank’s tracks in World of Tanks, everything managed to sound just right. Directional effects were evident too, from the direction of an enemy shooter (e.g. Destiny or World of Tanks), the sounds of battle going on around me (e.g. Destiny or Gears of War) to a car coming up on my left or right rear bumper (Forza Motorsports 6). Hearing directionality in headphones always makes an impression on me, especially when done right, and the A50s do it well.

The A50s can also be used to listen to music and movies, which of course the Xbox can do via its Blu-ray drive, movie apps (e.g. Netflix or Crackle), as well as their own music service, Groove. The “media” setting is pretty sufficient for movies and music. I checked out a few flicks, like Fast & Furious 6 (one of my guilty pleasures), X-Men First Class and even Monsters University (hey, I have kids). All the movies sounded pretty good, with ample explosions, special effects and dialog being more then discernible. As for music, I listen to almost everything, from classic rock and roll, electronic, hard rock and even classical, but I don’t listen to country. Every song I put through the A50s sounded good, and I didn’t have any complaints. That being said, these headphones excel at gaming, as that is what they are geared for.

As mentioned earlier, we ran into problems when first reviewing the A50s, and it was in regards to the chat functionality. When I first got the headphones, and I went online, people complained that they could not hear me that well or that I sounded like I was talking through a cardboard tube. The regular crew I play Destiny with complained frequently about my voice quality, hence I stopped using the headset. I emailed Astro and worked with one of the techs about this problem. He stated voice quality should be good, so he had me update the drivers to see if that fixed it, but it did not. After a series of a few more emails Astro sent me a new chat cable/adapter. Once I used it people noted the difference. I sounded louder, and closer, even though a few said I still sounded a bit distant though. In the end it seemed to do the trick as most people could hear me loud and clear with the new chat cable/adapter. That being said, there was still a slight difference then when I used the regular chat headset, but the difference was not a deal breaker. 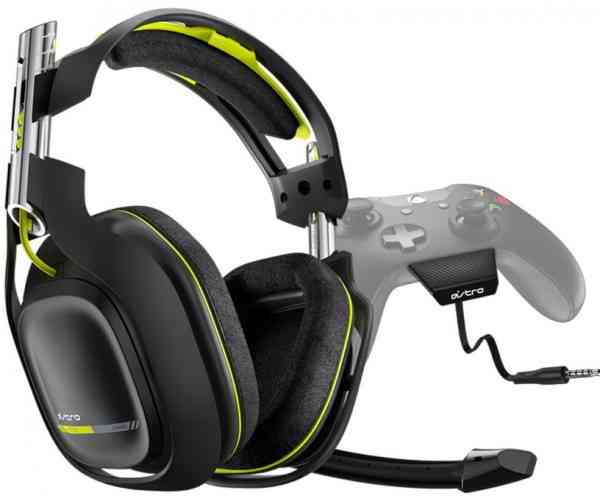 Battery life on the A50s is fairly impressive. If I used the headset in extended gaming sessions (4-5 hours/day on a weekend) I found I could get about two days before I had to charge them. I must note that the charge cable is very short and not usable when you want to actually play games and charge the headset at the same time. To get around this I used my plug and play charger (mini-USB) given how long the cable is. In regards to the wireless range of the headphones, I found that about 25-30 feet was about how far I could walk away from the wireless transmitter; this should be more than ample for most gamers.

My biggest complaint with the A50s is in regard to the sound/EQ modes. There are only three of them. As noted, I have been using the Turtle Beach Stealth 500x prior to the A50s, and the 500x has a wide variety of EQ modes. These include 12 different surround sound/EQ modes, and 4 different stereo modes. With the 500x you can actually go online and download new and very specific EQ modes as well, including those designed for specific games (e.g. Destiny. Call of Duty, etc.). This is where Astro seems to be a little behind at this moment, as the A50s are not able to download custom EQs, nor is there the ability to fine tune the EQ modes that currently exist. I have to say that what is there is good, but more is better in this case, and this is where the A50s need to improve.

Overall, the Astro A50 Wireless Headset Xbox Edition is a darn good headset. Its battery life is decent, it’s solidly built, comfy to wear, and it really does sound good and that is what counts. Sure, the mic-monitoring is questionable and there are not as many EQ modes as some of its competitors, but the headset does what Astro wants it to do, immerse the user in quality sound. Astro’s heritage for quality products is once again proven with the A50 Xbox Edition, but it’s almost time for them to release a new flagship product as other companies have caught up with them.

***A retail unit was provided by Astro Gaming for review purposes*** 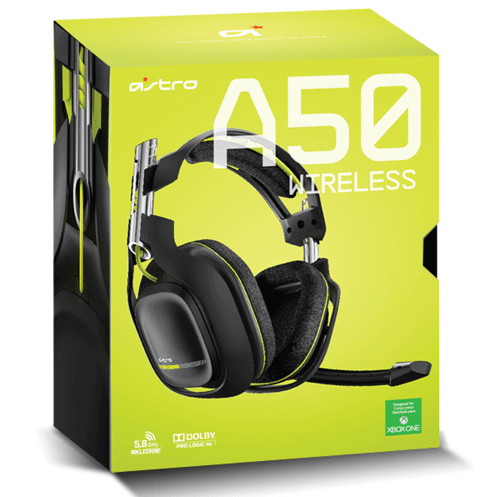 Astro Is Coming to the PS5 With Astro’s Playroom