Imagine a game that combines the charm of Portal with the platforming of Bionic Commando, because that’s what you’re getting with Wreckin’ Ball Adventure. In Wreckin’ Ball Adventure, you’ll take on the role of K160, a cute little robot ball that is determined to escape from the evil SuperCom lab. You’ll navigate your spherical friend through 60 different levels, avoiding all sorts of traps. Along the way, you’ll discover the motivations behind the evil SuperCom corporation, and the reasons they want to kill K160. If you’re looking for a unique challenge at a budget price, this might do the trick.

Wreckin’ Ball Adventure is a side-scrolling, 2.5D platformer where you navigate the hero, a ball named K160, through 60 levels. Each level gets progressively more challenging than the last, and you’ll need to master all of your abilities to be successful. K160’s abilities include jumping, wall-jumping, and a sweet grappling hook that brings back fond memories of Bionic Commando. Unfortunately, not every surface can be grappled, and I often found myself in a pit of boiling lava because I couldn’t tell which platform I could grapple on to.

I’ve Got Balls of Steel

While the game isn’t exactly a walk in the park, there are some elements included that help makes the journey a little less frustrating. Most levels will have at least one checkpoint, which usually comes with a huge sigh of relief, but additionally, you’ll be able to place your own checkpoints throughout levels. It’s very rare a game lets you do this, and you would think it would make the game too easy, but in this case, I found more often than not that I’d simply forget about the option to place my own checkpoints. The most frustrating aspect of Wreckin’ Ball Adventure was the need to collect enough stars (there are four in each level) to unlock the next stretch of levels – this often required me to replay past levels and seek out the hidden stars. While I appreciate the desire to stretch out those 60 levels, I felt that it ruined the flow of the game. 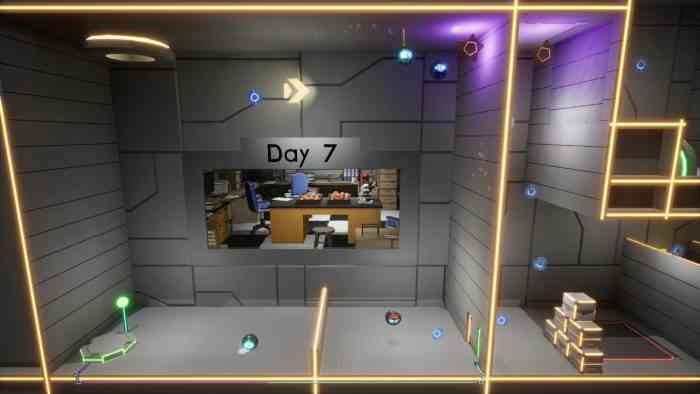 While the games aesthetic is similar to that of Portal, it’s not nearly as polished. The visuals, at least for the first portion of the game, were clean and sterile – much as you’d expect from a lab. Each level is represented by a day, and you’ll often find windows throughout the levels that give you a glimpse into the SuperCom labs. There aren’t any cutscenes or any overly flashy effects. The story, what little there is, is conveyed through on-screen texts that pop up occasionally. The music is a pumping, electronic soundtrack that isn’t too bad. I do wish the game offered more visual and auditory signals for some of the game’s traps. I often found myself plowing into deadly lasers because I couldn’t see or hear them off-screen – and when you’ve got some serious momentum going, it’s hard to stop suddenly.

The game features a couple of additional modes. There is a multiplayer option which allows up to four players to play co-operatively throughout the campaign, and also an Endless mode that allows up to four players to see how long they can survive within a massive level. I’m not sure how “endless” Endless mode really is, but when I tackled it, it was definitely longer than the standard levels. Finally, there is a Playground level that I believe is supposed to be like a tutorial area, but honestly didn’t really get the point of it, since the main campaign did a pretty decent job teaching the game’s mechanics. 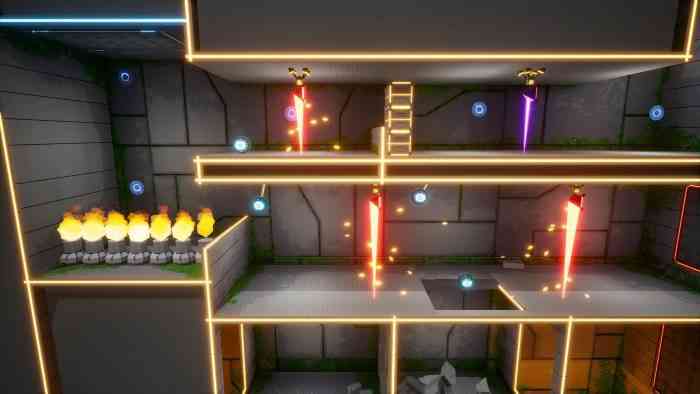 Wreckin’ Ball Adventure is a decent platformer that combines some existing gameplay elements and tries to do something relatively unique. While we generally don’t discuss price in reviews – it’s worth noting that Wreckin’ Ball Adventure is very cheap. Even if you have the slightest interest in it, I’d encourage you to give it a go. It’s hard to have buyers remorse if the game is cheaper than a meal at a fast food restaurant. One oddity worth mentioning is that despite the focus on being a wreckin’ ball, there really isn’t a lot of wreckin’ going on – only a handful of walls in each level can actually be destroyed. While there were some moments that pushed my patience and I was annoyed at having to go back and replay levels to earn enough stars to proceed, ultimately, I felt the game had enough redeemable qualities to warrant a recommendation.


Zorya: The Celestial Sisters is Now Available on Nintendo Switch and PC