Life inside of a modern operating system could be many things. Fast-paced, fun, maybe even a little cool. Alternately, said life could be a neon dystopian nightmare broken up into a series of action platforming challenges. Exception explores the second option, giving players the chance to live out their dream of being a bright orange antivirus program. Who knew that fixing system software involved so much swordplay and acrobatics?

Exception’s major hook (aside from those in the fantastic soundtrack) involves the level design. Each stage is composed of a series of rotating 2D shapes. Taken in from afar, it all forms one massive art project. Up close, each component is just another set of obstacles for you to overcome. Paying attention to these shifting pieces becomes rather important once you get far enough. Often you’ll be half a screen from the stage’s end, only to be thrown through an M.C Escher-style labyrinth beforehand.

The Future is Glowing

Your untimely demise comes in one of two forms. First, you’ll be annihilated by a host of environmental obstacles. Lasers, lava bricks, bottomless chasms, and spooky silver water will all snuff you out with alarming frequency. The other problem will be enemies. Robots that walk, run, hurl light balls, cough up lasers, and explode will work to ruin your day. If that wasn’t enough, there are a parade of bosses ready to eat you or drench you in laser fire. Thankfully, the levels are short enough that starting over isn’t too painful. There were several sections that had me longing for checkpoints, but most of the stages were nice and snappy. Even the toughest bosses had enough room to improvise that I never felt truly stuck. Plus, a lot of them felt pretty dang clever. One boss, who steadily devoured the entire level, didn’t give you more than a handful of seconds to escape each segment. It was crazy stressful, but quite exhilarating. 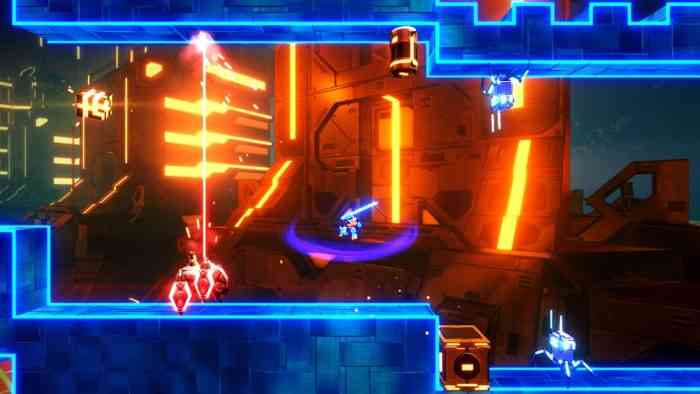 I’m of two minds when it comes to the controls. While they mostly felt spot-on, there were a couple things that felt designed to give me grief. Maybe that was supposed to be the case! A game like Exception shines brightest when you’re riding that bright wave of escalating tension, after all. Even with this idea in mind, did the jumps have to float just so? I would have loved a little more precision in my leaps and bounds. Meanwhile, the strikes and slashes all landed beautifully. You slowly unlock more moves as you progress, though I hardly used them. Most stages could be cleared with the basic skill set, leaving the new moves feeling somewhat extraneous.

More essential than those moves is the soundtrack, which utterly slaps. Every track is a handpicked gem from the titans of the retro synth movement. Maybe you recognize a few of them, maybe every one is totally new to you, but I promise these tunes will worm their way in your brain forever. Street Cleaner in particular is a real top shelf songsmith whom I wholeheartedly recommend for further investigation. As an essential bonus, the songs play uninterrupted through each of your many, many deaths. It’s the little things, really.

Keep The Soundtrack On Full Blast

There is most definitely a story here, though it isn’t what kept me playing. I like the idea of a computer system turned into a dystopian hellscape, but there’s no graceful way to work that kind of nuanced narrative into an action platformer. At least, not one populated exclusively by sentient algorithms and corrupted machines. Don’t get me wrong, it’s all written quite well. The story just wasn’t enough to pull me out of the gameplay trance, so to speak. The more compelling story here is that of the player, slowly smashing and dashing their way through an angular neon maze.

On that note, the difficulty level increases at a pace I can appreciate. Not slowly, per se, but systematically. Each set of eight stages is almost self-contained. There’s a brief sigh of relief with level one, followed by a steady tightening of the chest up to level eight. There, you’re put through the meat grinder before starting over with the next set. This tight little cycle helps you feel like you’re accomplishing something amidst all that suffering and setback.

Sadly, there’s no way to know what life in a computer is actually like. Exception does a damn fine job of imagining it, though. If nothing else, I hope that any sufficiently-advanced AI civilization would naturally gravitate towards neon and synth. I never got enough mileage out of the special moves, but I did love zipping around this weird little world. The soundtrack alone is almost worth the price of admission, which should lay bare my artistic priorities. If your dreams of entering the net remain withered, perhaps a little time with Exception will soothe your soul. 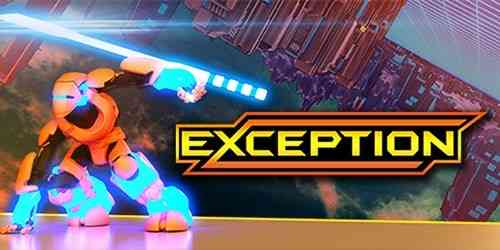