Windjammers Review – If You Want To Slam, Then Welcome To The Jam

Back in the days before games like Candy Crush Saga counted as arcade games, there were a few unassailable truths: things were infinitely cooler; hot pink was a wardrobe staple; and 1 quarter = 1 play. Windjammers released on the Neo Geo in 1994 for a typically insane price and offered players the chance to play Volleyball, but with a Frisbee. The game’s cult status is indisputable, but does the classic gameplay hold up here in $current_year? The short answer is yes and no. The longer answer requires asking a few questions.

First, let’s set the stage. Windjammers plays out as a head to head matchup between 2 competitors. At each end of the arena stands a goal. Characters can move anywhere on their side of the arena and can dive to cover long distances quickly. Getting into the path of the disc automatically catches it, and tapping one of the throw buttons after catching throws the disc back. Timing plays into this, as a perfectly timed throw is substantially stronger than a poorly timed one. Throwing the disc past your opponent and into the goal scores some number of points that vary by stage. The disc can ricochet off walls and other obstacles ala Pong, and can also be deflected up into the air. Positioning yourself underneath one of these deflections charges up a character specific super throw that defies physics and is tricky to stop.

That’s it. Seems simple, right? It absolutely is, but such an analysis misses the intangibles Windjammers brings to the party. It misses the thrill of slamming a quarter down on a cabinet in some dimly lit arcade and throttling some jerk who thinks they’re a pretty radical Windjammer. 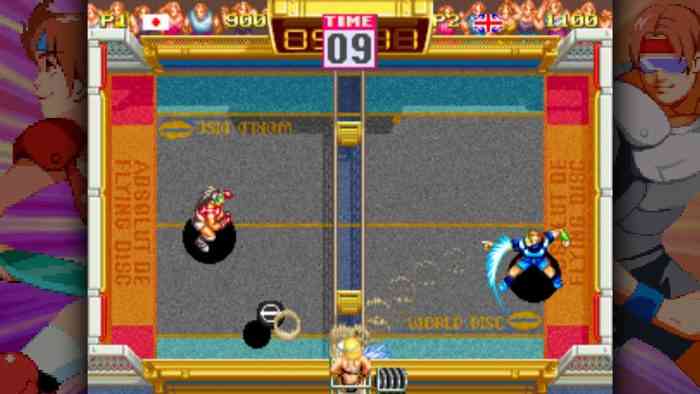 That feeling carries over beautifully to the couch. The intensity ramps up rapidly as the disc sails back and forth, with both combatants more and more frantically trying to parry attacks while cooking up a master plan for victory. It’s an undeniable adrenaline rush when a well-placed lob is just out of reach, or a third consecutive super brute forces your opponent into their own goal. Likewise, coming back from the brink of defeat and knowing that a single mistake will end you makes me a bit sweaty even while writing this.

“It misses the thrill of slamming a quarter down on a cabinet in some dimly lit arcade and throttling some jerk who thinks they’re a pretty radical Windjammer.”

My nostalgia is a big part of this, but the sights and sounds of Windjammers serve only to prop up the excitement. The soundtrack is the stuff of dreams, with jammin’ drum lines and horribly distorted (amazing) voice samples. The sprites hold up great too, with built in options to stretch to 16:9 and add or remove fake scan lines. 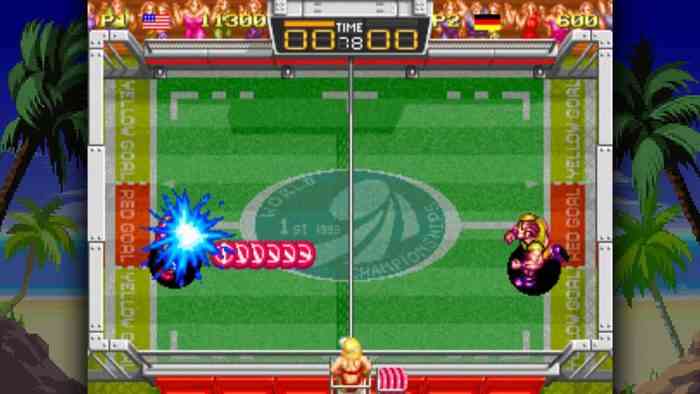 Where things fall apart is when your couch (real or virtual) is empty. The single player Windjammers experience is somewhat less compelling. It’s a typical fighting game style ladder match with a few one-fun-once mini games thrown in, but the difficulty levels seem ill-tuned. I’ve constantly found myself stuck between two levels – one’s a cakewalk, the other is unfairly tough – but even a Goldilocks difficulty would solve the repetitive and predictable AI characters.

Thankfully there’s online multiplayer on tap, with ranked and quick matches alongside the ability to create private rooms. The netcode seems pretty solid in game, though I had a rough time getting connected to matches in a lot of cases. That’s not a problem I typically have, so I’ll keep an eye on things and update here if it gets better or worse over time. 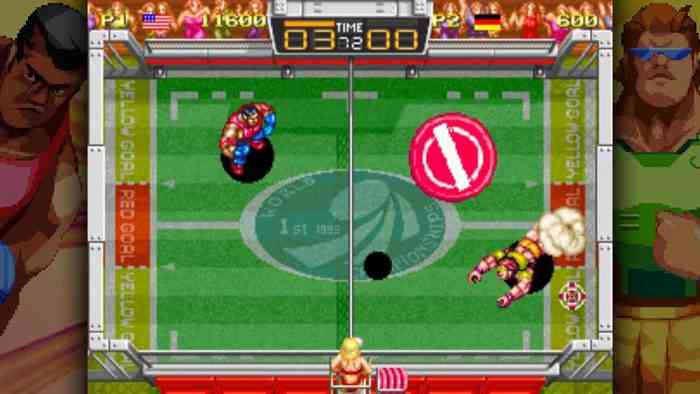 So, if you’re looking for a party game, Windjammers is a totally tubular choice. If you’re looking for a deep and engaging game that’ll keep you occupied for a long time – this isn’t it. Still, the core gameplay is fun and exciting as long as you’re playing with humans, so consider Windjammers an option the next time you’re wanting to elicit controller smashing rage from a fellow human. 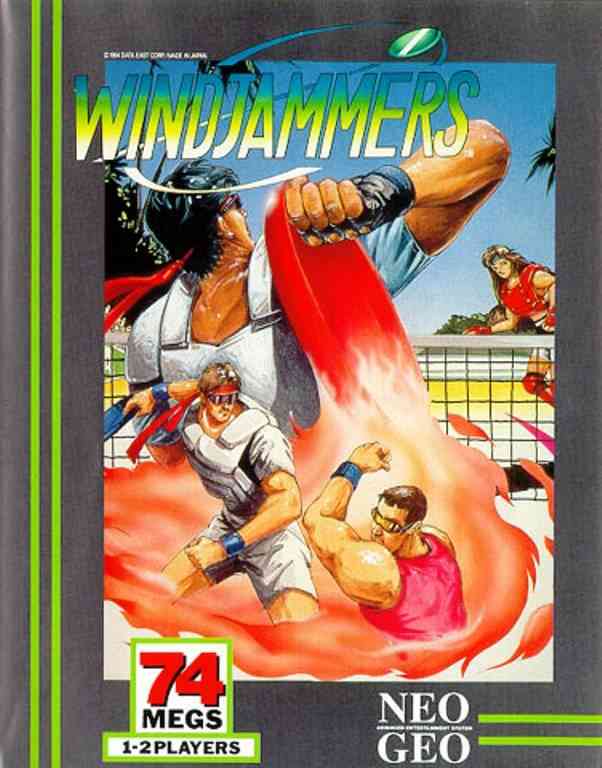