Do you love the 90’s? Do you even remember the 90’s? If not, that’s totally fine! Windjammers 2 is here for you either way. This hyper-vibrant sports game presents a sleek, sexy look at the most extreme decade. Sort of! Mostly you get a vertical slice of the flying disc phenomenon. If you find yourself pining for those wraparound shades, blistering neon tank tops, and extreme font choices, then you’re in good hands. Furthermore, this is the platonic ideal of disc-based sports. From the aesthetic to the execution, Windjammers 2 is the purest form of this simple idea. Also it’s really fun!

My first few matches were brutal. It turns out there’s a huge difference between catching discs and returning them. In particular, the second option comes with its own built-up momentum that you can’t get otherwise. That’s a big deal! Storing and spending your energy is a massive part of the process that you need a fair bit of practice to untangle. Once you get into that rhythm, however, a tiny path forward opens up for you. Before long, you’re catching and chucking discs like there’s no tomorrow. The other essential element you need to master is player style.

The Fine Art Of Flinging Discs

Every character is balanced between power and speed. Where you need the scales to rest is entirely up to you. I found speed pretty much essential for surviving any given match. How else do you get around the arena fast enough? Some of those specials are impossible to catch, otherwise. Although a high power rating is great too! Some of the beefier characters can hit so hard they shove both disc and defender into the goal. Which truly never gets old. Of course, power players are forced to dash more or less everywhere, which puts a lot of pressure on the controls. 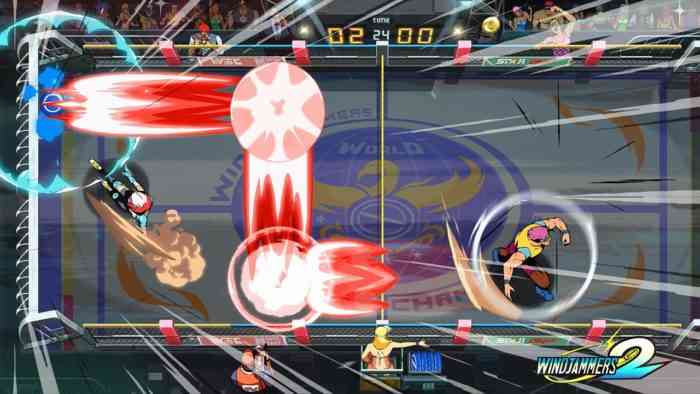 We’re squarely in ‘easy to learn, hard to master’ territory here. You don’t have a long list of moves! Just a lot of ways they can be used and combined in any situation. This can lead to some clumsy mistakes early on. Things like dashes in the wrong direction, violent over-corrections, and poorly timed specials. The game’s pace is immediately intense, which can keep you constantly panicked. This isn’t a gripe against the controls! Merely an observation about the learning curve. It’s pretty steep, but only for a short while. Eventually, you master the move in question, leaving you free to start figuring out another one.

So Bright You Gotta Wear Shades

I’m a little torn about the visuals. The old pixel art was amazing, but this is like the box art came to life. There’s real merit to that approach, especially in motion. Hand-drawn graphics can easily go wrong, but Windjammers 2 pulls them off. Beyond this stylistic decision, the color palette is exceptional, the animation is smooth, and the effects look terrific.  Did the 90’s actually look like this? Sort of! If you hit the gym or the beach in the right city, you could absolutely catch something like this in action. But this is better than accuracy. Instead, the team at DotEmu sifted through the rubble, caught every speck of neon and spandex, and distilled it all into something beautiful. Intense, yes. Dangerous to look at for too long, even. But this is a pure, unfiltered hit of the 90’s, like a long drag off a bright pink oxygen tank.

Windjammers 2 is a pretty simple game, but it’s also a fun one. Once you climb that short, steep learning curve, every match is a blast. Even when you’re getting creamed, it’s something of a teachable moment. Plus, there’s also some new technique or strategy you can employ next round. Everything looks and sounds extremely 90’s, while the characters themselves all use distinct play styles. This was a huge boon for me, as I could just switch players whenever I hit a wall. Even if the game is quite straightforward, the well-rounded multiplayer will ensure you’re never actually bored. If you’re looking for an extreme, vibrant, 90’s style sports game, you’ve come to the right place. Windjammers 2 is a neon-drenched, disc-flinging good time. 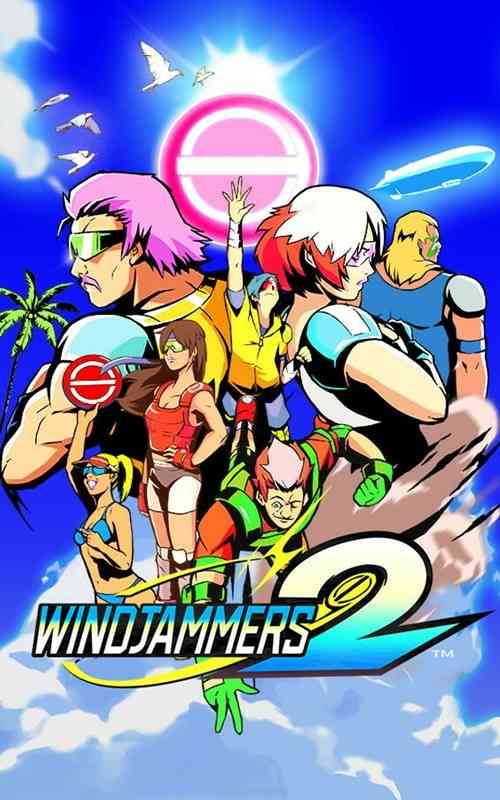 Teenage Mutant Ninja Turtles: Shredder’s Revenge Is an Epic Blast From the Past
Next RPGolf Legends Review – Putting Zelda on the Links
Previous Expeditions: Rome Review – Best of the Series