This War of Mine: Stories – The Last Broadcast DLC Review – Tough Choices

This War of Mine: Stories – The Last Broadcast DLC Review

I’m of two minds about The Last Broadcast. On the one hand, it totally accomplishes exactly what it sets out to do. On the other hand, you can’t help but see what it could have been, and the potential that this single episode could have launched a significant expansion (or even a new game!). I’m not in the business of reviewing games for what they aren’t, but hopefully, as we give this episode some context, you’ll see what I mean.

Let’s just refresh ourselves on the base game, This War of Mine. Originally released in 2014 by 11 Bit Studios, This War of Mine wasn’t the company’s first game, but it was definitely their first hit. At its core, it’s a survival and base management game. You play as a group of civilians trying to survive a war zone in Eastern Europe. By day you manage your base, a bombed out building of some kind. At night, you rest, recover, and send one survivor to scavenge. Campaigns have a predetermined length, and if you survive long enough, the war comes to an end. If winter doesn’t end you first, you win.

What’s mindblowing about This War of Mine is how it forces you to make hard decisions. Sure, lots of games love to claim that they react to the choices you make (often including the message that “so-and-so will remember that”) but those choices are easy. In many of my playthroughs of This War of Mine, I encounter an old couple. They are living alone in a well-stocked house. You can rob them, murder them, or leave them alone. They can’t really stand in your way. If you hurt them though, you’ll probably feel like crap. Even if you yourself are an unfeeling sociopath, a surprisingly robust system underlines each character’s emotional stability. If Marko kills someone, Emilia may get pretty bummed about it. If the next day you run out of coffee and cigarettes, she may lose it. 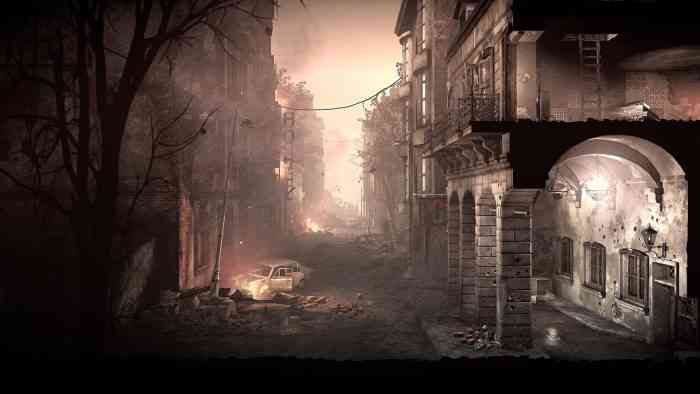 Which brings us to The Last Broadcast. This isn’t being marketed as a full-blown expansion to This War of Mine, but the second of three episodes. In it, you play as a crippled radio host and his wife. You are presented with a whole new kind of choice to make: whether or not you tell the truth. You have the responsibility as a radio journalist, but expose the wrong people and they may want revenge.

This dynamic is genius and highlights everything the base game does right. If you find out the positions of an enemy sniper, do you rat them out? What if they’ve been targeting civilians? What if telling the truth could get you and your wife killed? 11 Bit’s Frostpunk prides itself on forcing the player to make tough compromises, but nothing made me sweat like The Last Broadcast. Something about weighing truth and journalism against personal safety feels timely. I dunno, it got me.

Here’s the thing though: all those tough choices only exist within the episode. If you go and play the base game campaign, it’ll be much as you remember it. No truth-telling mechanics to find, and no new base management and development. That’s a real bummer because The Last Broadcast starts you off with a pretty well-realized base. It’s really committed to the story it’s telling, and despite introducing some of the best new game mechanics of the year, they’re walled off in an extremely curated experience.

You see my dilemma? The Last Broadcast doesn’t really feel like This War of Mine. It feels like an art piece someone built upon the other. A story within the framework of the game. The base game is an all-time great, I’ll say that again and again. The Last Broadcast is a moving story, but one you’ll be through in something like two hours.

Then again, the asking price for this episode is $3.99. I was in New York last week, and a movie ticket cost me fifteen dollars. I like going to the movies, so I don’t mind shelling out fifteen big ones to see the new Avengers or whatever, and that didn’t hit me in the feels half as hard as The Last Broadcast. Maybe games are a victim of their own high expectations. As a one-time story experience, The Last Broadcast succeeds and then some.

Winter Is Coming: Frostpunk The Board Game Smashes Kickstarter Goal