If you’re not paying attention to Vengeful Guardian: Moonrider developer JoyMasher, you should. Especially if you love NES-inspired action platformers. Their first three titles are all fantastic. Oniken is a Ninja Gaiden-like series of levels. Odallus: The Dark Call expands on Oniken’s ideas and creates something closer to Castlevania II. And Blazing Chrome is an epic heavy metal version of Contra. There’s no arguing that all are essential playthroughs for lovers of late-80s through mid-90s action platformers.

JoyMasher’s fourth game, Vengeful Guardian: Moonrider, has arrived, and it goes back to the Ninja Gaiden inspirations of Oniken. On the surface, it’s a solid cyborg ninja 80s nostalgia fest. But there’s some interesting nuance that sets it apart from other titles in the genre.

There’s a story about a cyborg ninja weapon that awakens in a lab, escapes, and tries to take down all the other cyborg ninja weapons. The cutscenes are brief, with beginnings stylized after Paul Verhoeven sci-fi films Robocop and Starship Troopers. They have those 80s cyberpunk “rise up against the fascist government” ideas. The story bits are brief though, and never bog down the action. Even the NES Ninja Gaiden titles have longer cutscenes. I would have liked a bit more story development, as the cutscenes are really well done. But players looking for an arcade experience will really appreciate their briefness. Just enough to set up a world and motivation. 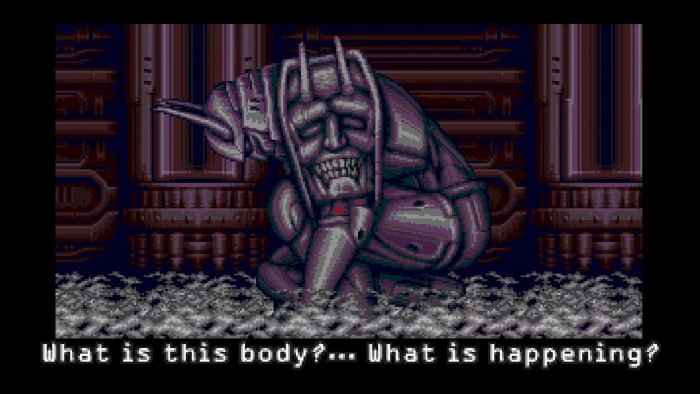 The lone robot, rising-up to challenge other robots, definitely has Mega Man inspirations too. Though aesthetically, Vengeful Guardian: Moonrider looks closer to the Super Nintendo’s Hagane. The game’s structure takes some influence from Mega Man as well. After beating the first level, six more open-up, playable in any order. There’s also a final level locked behind the other six.

Gameplay involves getting to the end of two-part linear levels, and fighting a boss at the end. There’s an attack button, with a three-hit combo, a secondary, more powerful attack that uses up a meter, and a jump. Double tapping forward results in a dash, walls can be jumped off, and attacks can be done from the air, resulting in a drop kick. What makes the gameplay unique is that it’s not intuitive. The wall jump has a strange delay that needs to be adjusted to. The dropkick has a slightly undesirable angle. Ceilings are often slightly lower than wanted to make full jumps. Pits are often slightly too long to be easy jumps. Every aspect of Vengeful Guardian: Moonrider is a challenge. And that’s awesome! 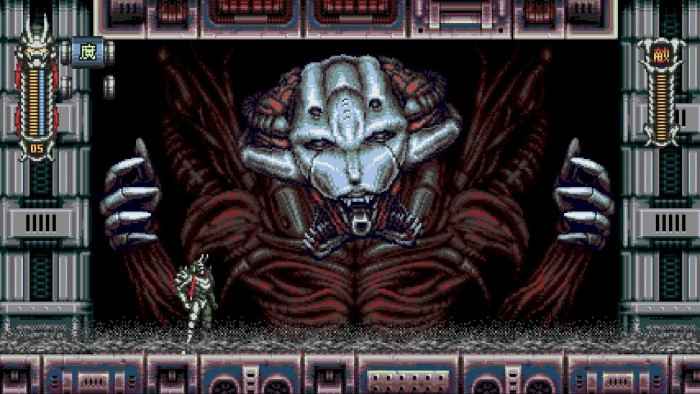 The game never felt overwhelmingly difficult. However, I usually had to take at least a second run at every level and boss, but it didn’t require too much trial and error. I had to think about every jump and enemy. Enemies usually had secondary patterns that ruined the most obvious solution to the first pattern. For example, a hovering enemy had a diagonal shot, so my instinct was to go underneath it to avoid the shot, but when I did that, the enemy dipped down. Vengeful Guardian: Moonrider was made for people who have played lots of action platform titles, and want to have their instincts upset.

There’s some great gameplay variety in Vengeful Guardian: Moonrider’s eight levels. The second level I tried shifted perspective, and had a Mode 7-looking motorcycle section. I wish the game had more of those, because it was insanely fun, and also messed with my gameplay instincts. One level took place in the air and had Moonrider jumping across flying ships. Another had a boss-like robot in the background, shooting at Moonrider the whole time. JoyMasher really maximized Vengeful Guardian: Moonrider’s gameplay palette. 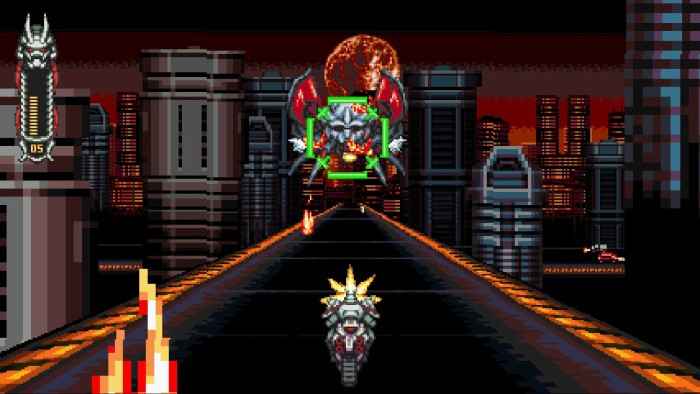 Even though there’s only eight levels, Vengeful Guardian: Moonrider has lots of replayability value. Levels are linear, but have secrets to find, and occasional multiple paths. The secrets are usually power-ups. Some are secondary attacks, which can be cycled through at any time. And some are equipable power ups that have passive abilities, like MP regen or increased defense. Every level has a ranking at the end, based on damage, completion time, secrets found, etc. Completing the game is a decent challenge, but those rankings are gonna be the stuff NES speedrunners are looking for.

It’s hard to critique a game as tight as Vengeful Guardian: Moonrider. The most obvious complaint is that it’s quite short. But it’s meant to be replayed. A more subtle critique would be that it follows a lot of popular stylistic stereotypes. I love the 2D graphics, the bangin’ synthwave soundtrack, and the story of a cyber ninja battling a fascist American government. But these are done to death tropes.

Vengeful Guardian: Moonrider is gonna be a tough sell to people who have already played games like Cyber Shadow. There’s also one game play feature I couldn’t stand, and that’s a jarring vertical transition when jumping too high. For a game that demands precision, this choice came off as annoying. I’m sure it was homage to NES games where the player can jump into the top of the screen, but it became frustrating at the wrong times a little too often. 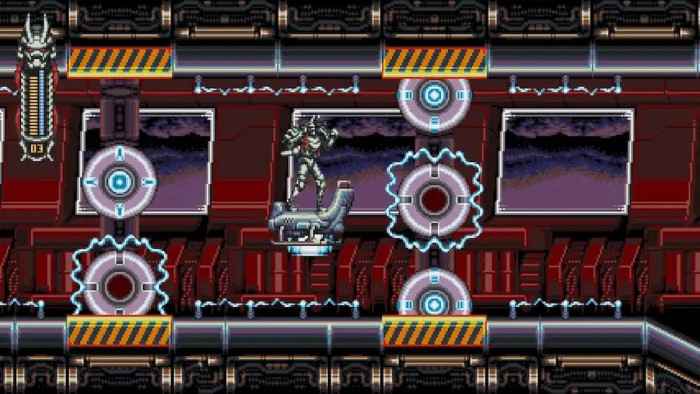 I loved Vengeful Guardian: Moonrider, but it won’t be for everyone. It’s a must-play for 2D action platform veterans. Especially those that value speedrunning. The 80s inspirations hit all the right nostalgia buttons for me. It might look a little generic on the surface, but anyone who gives Vengeful Guardian: Moonrider their time, will find a tight action platformer, with lots of unique nuance. If you’re at all curious, don’t hesitate to pick it up. 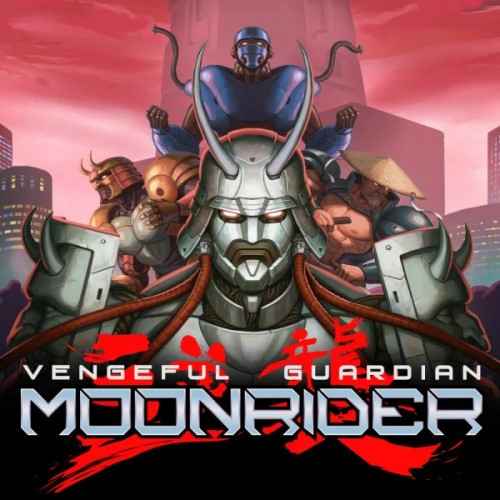