Until You Fall Review – Neon Swordfights

Until You Fall PSVR Review

Schell Games have a crafted a colourfully neon bright rogue-like Sword game that has been honed to the sharpest of edges. How did they pull this off? Well, they have done so by creating a game with eye-popping, bright neon colours that really pop in VR and pairing them with a game physics engine that really makes you feel like a dual-wielding sword master. To top it off, all the action is accompanied by a kickass synth-wave soundtrack that gets the blood pumping and makes the action feel even more visceral. Weapons and enemies glow with magical neon menace. There is an immense satisfaction to your gaming session as you are almost dancing as you dodge, parry, and mete out blows against your enemies.

Until You Fall has a bare bones story, as you are the last hope of a fallen civilization out to defeat the enemy, and in the process hopefully restore all that was lost. So, after gearing up in a lobby area that looks a mystical castle dungeon, you venture through a portal and are transported to the blasted surface above. Here you fight progressive waves of enemies, each more powerful than the last for as long as you can. When you fall, and you will fall, you are returned to the lobby where you can level up your weapons and skills. And venture forth again. Until you fall. Again.

There are 21 levels to be conquered on three difficulty levels.

Weapons range from short daggers, to long swords, to axes. What is really cool here is that Schell Games has been able to impart a real sense of physicality with the various weapons. Daggers move at the same rate as your hands do in the real world but the heavier the weapon, or the longer, the more effort you must impart for the weapon to move. This mechanic provides an illusionary sense of haptic feedback that really elevates the gameplay.

Battles consists of offensive and defensive maneuvers which are highlighted by graphical slashes – vertical, horizontal or diagonal, in the air between you and your enemy. Striking or blocking with your weapons in time to the slashes yield the maximum offensive/defensive damage. Defensively, you must follow the slashes to block but offensively you can attack as often as you want. Such attacks are far less efficient and leave you open to missing a block if you do so. There is a Dash ability that can be used to attack or defend. Dashing into an enemy breaks their attack and can be considered a form of blocking. Dashing can also be used to back from an attacking enemy or enemies.

Weapons can be upgraded to mete out more damage and provide greater blocking abilities. Further, the weapons can be imbued with different powers that further extend their capabilities. One power-up for example, provides greater damage when a weapon is swung harder. Another power-up can freeze an enemy for a time. This can be used when battles become hectic and more than one enemy is attacking. Or the freeze ability allows one to go to town on a frozen target. 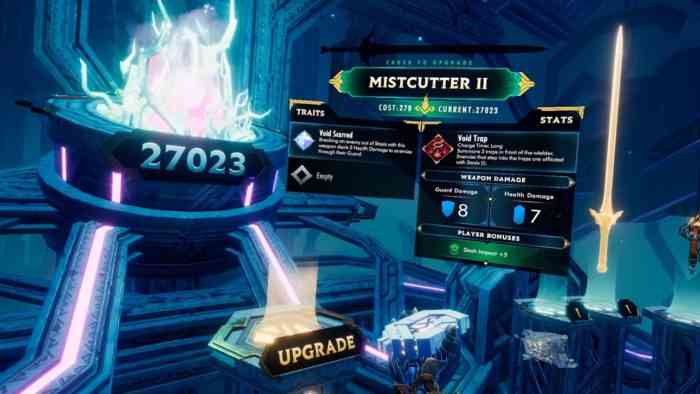 The enemies range from humanoids that move very fluidly (some form of motion capture was likely used) to fantastical creatures that are griffon/lion like. The enemies are of the same neon art style and appropriately menacing. Some are armoured like knights, others like samurai. The samurai, who do cool backflips to back away from you, have throwing weapons like ninja stars that whirl towards you leaving trails in your wake. You must block these while you are fighting other enemies.

As you progress through a level, you will face several boss battles that introduce new fighting mechanics. In addition to blocking, you will be forced to dodge physically left, right, and down. It’s these types of game playing tweaks that make VR gaming so fun and add to the immersion factor beyond the virtual world you play in where everything is to scale. Schell Games has done a great job of adapting the control options to the PS Move controllers, but this is one game where analogue joysticks are really missed

Schell Games have forged a winner. The swordplay gameplay feels real and the physics make for a challenging and fairly physically demanding game too. Add in the power-ups and abilities that can be added to each weapon and there is a play style available to suit every player’s needs.