Console gaming has never been more intense and pressure-filled. Massive in-game environments mean bigger swarms of aliens to obliterate, and larger, better-equipped enemy soldiers to neutralize. Your virtual foes have never been more clever, or tougher, than they are today. The battlefield has never been bigger and more complicated. And that’s just on the battlefield. There are also what are termed “non-combat variables”; to the civilian, that’s screaming children, barking dogs, and significant others assigning you household chores.

In this hostile environment, one lapse in communication can be fatal, or worse – it could lead to you having to change that light bulb in the kitchen. You need all the technological help you can get to read your surroundings, and stay focused on the objective. And that’s where the Turtle Beach Ear Force Stealth 500P Gaming Headset comes in. With completely wireless, DTS Headphone X: 7.1 Channel Surround Sound in a lightweight, comfortable headset, Turtle Beach has equipped PS4 (and PS3) gamers with the ultimate answer to today’s demanding games. If you are in the market for a good headset, this is definitely one you should consider.

Let’s start with the setup of the Turtle Beach Ear Force Stealth 500P. It was, surprisingly, very easy. I was not looking forward to the initial setup as I took the unit out of the box, as I expected a complicated process of pairing, selecting, and fine-tuning for what seemed to be a pretty serious piece of equipment. However, I was pleasantly surprised by how easy it was to get it going. You are provided with a Transmitter Dongle and a connecting cord. Simply plug the Dongle into one of your PS4’s front USB ports, with the connecting cord running from the Dongle to the Digital Out (optical) port at the back of your console. Boom – you’re done. It looks a bit awkward with the cord running from the front to the back of your PS4, but it is simple, and it works.

That was pretty much it for setting up the headset. The unit comes already paired out of the box (and charged), so there is no annoying Bluetooth pairing headache, as with some hardware. I did have to go into my PS4’s Settings and configure the Audio Output afterwards, but this is all explained very clearly in the instructions provided. After the initial setup, you will want to go into the Device setting, and optimize your headset’s voice volume. Again, this was very straightforward, and I was using the Turtle Beach Ear Force Stealth 500P in-game within 15 minutes of opening up the box.

As for the physical construction of the headset itself, I was very impressed with how amazingly light it was. The Ear Force Stealth 500P employs a light, but very sturdy plastic construction that feels substantial on your head, but light enough that it is not only comfortable, but unobtrusive. Moving my head from side to side, or up and down, I ceased to be physically aware of the headset after a while, and that is very important to me, as someone who is annoyed by the heavy feeling of most headphones.

“I have used a few headsets over the years, and I have never felt cushions as pleasant as these ones. They felt soft, yet snug, so that my ears never got sore, even after hours of playing.”

The set fits very comfortably, and I get the sense that it would be a great fit for any size or shape of head, since it has so many adjustable parts to it. The detachable Mic is on a fully-bendable rubberized boom extension that plugs into the headset, so you can move it to any position you like at any time. You can easily slide the top headband to make it larger or smaller, and the right and left headphones themselves swivel left-to-right to accommodate ear-angle variation. On top of that, they tilt up and down as well; put it all together, and I can’t imagine anyone finding the Turtle Beach Ear Force Stealth 500P to be uncomfortable.

That comfort is enhanced by another nice feature – the synthetic leather ear cushions on the headphones. I have used a few headsets over the years, and I have never felt cushions as pleasant as these ones. They felt soft, yet snug, so that my ears never got sore, even after hours of playing. The one nitpick I have with them might be that the synthetic leather surface itself fits so well that my ears couldn’t really breathe, and I found myself taking off the headset periodically to let them “cool off.” I guess the price you pay for excellent noise cancellation is a bit of smothering. However, the Ear Force Stealth 500P is certainly not the only headset to have this issue, and it is much less uncomfortable than any I have tried before.

As for sound quality wearing the Turtle Beach Ear Force Stealth 500P, I have never heard anything better on the PS4. It sports DTS Headphone:X 7.1 Channel Surround Sound; for those who aren’t aware of what that means, it is the product of a collaborative effort with DTS, a leading audio-technology company. It attempts to replicate the 3D, surround sound of modern movie theaters, but in the miniaturized package of headphones. So bottom line, for the average Joe (like me), it means that it is to normal sound what 3D is to 2D visually. It promises a headphone experience in which you will, in theory, be able to pick out individual sounds, and their physical location in relation to you. 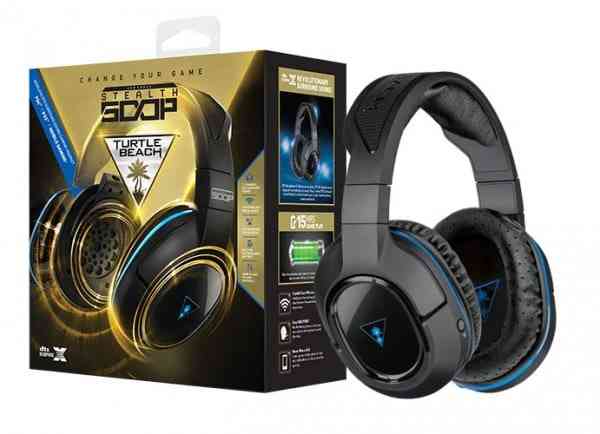 And boy does it deliver. The Ear Force Stealth 500P’s DTS surround sound is not just a gimmick; it actually gives you a 3D sound experience while playing games or watching movies. While playing The Elder Scrolls Online, this feature actually made me a better gamer, as I was able to hear enemies coming from behind me long before they got to me. And I didn’t just sense them behind me – I knew that were slightly to my right and behind me, at the 5 o’clock position. This ability also helped me a lot playing first-person shooters, such as Battlefield 4. In close fighting, I could often hear people moving around me much more accurately than I ever could using the Dualshock 4, or other headsets. In my experience, the audio precision of the Turtle Beach Ear Force Stealth 500P’s DTS Headphone:X 7.1 Channel Surround Sound was very impressive; the “360-degree sound” claim made by Turtle Beach is not an empty boast.

Even if you don’t appreciate the 3D aspect of the audio in the Ear Force Stealth 500P, you will notice that you just flat-out hear a lot more with these headphones than other ones. The layers of loud and quiet ambient noises that filled up the gaming environment were fully rendered to me for the first time. Plus, Turtle Beach has built-in a number of Pre-Sets – Bass Boost, Bass and Treble Boost, Vocal Boost and Natural Sound – into the headset itself, which you can cycle through at the click of a button, right on the headset. I loved this feature, since it allowed me use Bass Boost when listening to a music-centred game or movie, and then switch to say, Natural Sound when in an open-world like The Elder Scrolls Online or GTA V.

With all of the different ways to listen, and without all the hassle of fiddling with controls, I found that the Ear Force Stealth 500P really brought out the full audio experience of the media I was enjoying better than anything else I have used, and it completely blows away the normal Dualshock 4 experience. Something to watch out for, though, is the awkward positioning of the volume wheels for Mic Volume and Game Volume. Since they are also on the headset, right near the Preset button, I often got my eardrums blasted by accident when my hand brushed them slightly. But hey, the fact that you can adjust mic and game volume at all is a plus.

“And, perhaps most importantly, the Turtle Beach Ear Force Stealth 500P is completely wireless. This is a huge difference that sets it apart from other “kind of” wireless units.”

Chatting in-game is another strength for the Ear Force Stealth 500P. Game sound is not cut-off while you chat, which is crucial. The mic is very sensitive (perhaps overly-sensitive), and I even had to push it away at times to prevent my breathing from being broadcast, despite pre-setting the sensitivity to “medium” in the initial setup. One thing that the Ear Force Stealth 500P did that I liked, however, is let me hear my own voice in-chat, so I could know when I was shouting too loudly. With the help of this feature, compared to other players I chatted with, my voice sounded much clearer and natural, and I dare say sexier, than theirs did. The latter is just my opinion, but still.

And, perhaps most importantly, the Turtle Beach Ear Force Stealth 500P is completely wireless. This is a huge difference that sets it apart from other “kind of” wireless units. Even the best headsets I have used (including ones by Turtle Beach) required me to plug into the Dualshock 4 controller for chatting; they were almost wireless, but not completely wireless. The Turtle Beach Ear Force Stealth 500P is a totally-mobile, cord-free experience, utilizing the simple Transmitter dongle plugged into your PS4. If there were any downside to this, it might be that you lose the use of one of your USB ports while you are using the Ear Force Stealth 500P, but come on, that is really reaching for something to criticize.

The Ear Force Stealth 500P is advertised as having 15 hours of battery life on a single charge, and I found that it held up well after many hours of playing. Recharging the headset is easy, using the same micro-USB cable that you use to charge your Dualshock 4 controllers. In fact, despite the fact that Turtle Beach provided a charging cord in the box, I just used the same cord I already had to charge both it and my controllers – again, a nice, easy process that I liked a lot. 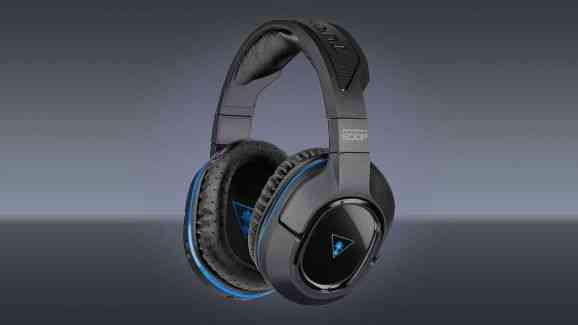 As far as compatibility, one small quibble I had was with the fact that the Ear Force Stealth 500P does not work wirelessly with many of your other devices – like your iPhone, iPad, or Android Tablet. You have to use a connecting cable (which they do provide) if you want to connect to these. It is too bad that some sort of wireless connection feature couldn’t have been thrown into the headset for every gadget – it would have made this great unit even greater.

But overall, the Turtle Beach Ear Force Stealth 500P with DTS Headphone X: 7.1 Channel Surround Sound is an amazing piece of gaming hardware that I wholeheartedly recommend for any modern gaming warrior. Comfortable and light in design, it is easy to wear for long periods. Most importantly, its incredible 360-degree 3D sound is something you have to hear to truly understand, and it will make you a much more effective (and entertained) gamer. Turtle Beach has made this with a lot of features PS4 gamers want, like easy recharging, long battery life, and complete, no-asterisk, wireless connectivity.

With the PS4, gaming has moved to another level of visual sophistication. The challenge has been made, soldier. It’s time that you meet it and step up your audio game as well – and the Turtle Beach Ear Force Stealth 500P is the perfect gaming headset to help you do it.

**Reviewed on PS4 with headset provided by the company**