Toy Soldiers: War Chest is what you get when someone takes the movies Toy Soldiers and Toy Story, throws in a huge spike of nostalgia and decides to make an RTS/Tower Defense game out of it. Using some classic collections of toys, you defend your home toy box from the waves of the enemy armies of rival toys. By tapping into a successful genre and pulling on your blissful memories of playing as a child, Ubisoft and Signal Studios pitch one right over the plate; however, there are some things holding this one back from being a homerun…but it’s probably still a ground rule double though.

The gameplay is pretty straight forward if you know the RTS/Tower Defense genre. You choose from a couple of toy sets (Star Bright, Kaiser Willhelm, Dark Lord and Phantom) and you have to defend your base from the incoming invaders. You get to visit different toy sets that are the actual levels that you have to fight through. These definitely make you think of the good ol’ days when you didn’t have responsibilities! And, if you’re of a certain age, it may just make you look at your kid with an iPad stuck to his face and wonder ‘what the hell went wrong?!’. There are a couple of other toy sets to choose from, but you’ll have to read through to find out about those. 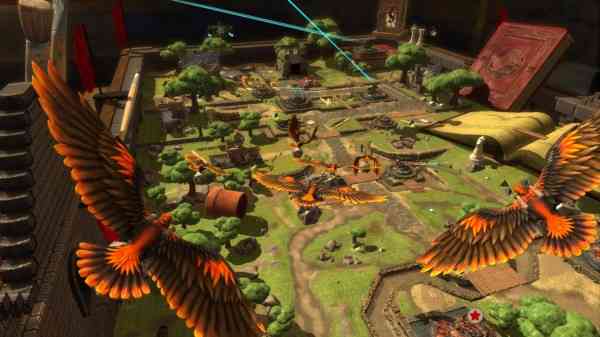 To spice up what you’re accustomed to from the RTS/Tower Defense genre, you have the ability to take control of any of your four types of turrets and mow the enemy down yourself. If your kill streak is long enough, your meter fills up and you can call on your hero (the toy of the set your using) or some other extra powerful units that are unique to each set. Most of the maps also come with a vehicle that you can also command. Each one is unique to the level and can be lots of fun (especially the dog fights)! Neither of these styles is perfect, but they do add a layer to the gameplay that I thought was a great add-on to keep it from becoming stale.

The single player campaign is actually quite challenging, not allowing anyone who’s been playing video games long enough to actually remember these toys an easy task. Each level also comes with a pair of challenges with parameters you have to meet; some of them in direct opposition of each other that will ensure you play them again if you’re a completionist like myself. The campaign also features a few ‘Survival’ maps where you can try to beat your best times and garner some serious experience points as well.

“All in all, there’s a whole lot packed into this game and all of the modes are quite entertaining.”

Toy Soldiers: War Chest also includes a multiplayer/co-op mode that is a lot of fun, and it definitely helps to play with a friend who also has the game. Additionally, there is also a ‘Weekly War’ area that unlocks a new map for every day of the week. If you beat the whole week you get some awesome extras! All in all, there’s a whole lot packed into this game and all of the modes are quite entertaining.

I’d love to keep heaping praise on the game, but I’m a little annoyed with it, quite frankly. First off, the gameplay mechanics aren’t always amazing. As I stated before, the other modes in the levels aren’t perfect and the A.I. regularly ignores the enemies closest to your base, but it doesn’t take away a lot from the game. There’s also the fact that once you’ve beaten the campaign, you’ve more than likely maxed out all of your heroes and their armies, so going back to complete the side quests loses a little of its appeal. But that’s not what I’m annoyed with. On the contrary, those negatives are easily handled and they don’t detract from the game in any big way. No, what I’m annoyed with is its sneaky pay-to-play model. 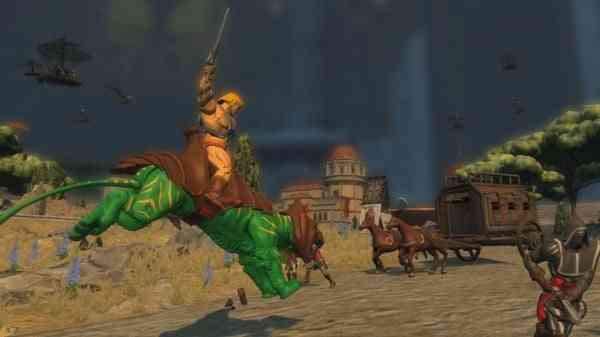 If you watch the trailer for this game, or if you’re one for nostalgia, you may have noticed that I didn’t mention that you can play as He-Man and the armies of Eternia, Duke and the Joes , Cobra Commander and the Cobras, or even Ezio and the Assassins. That’s because you can’t. Well, you CAN, they just cost you $4.99 a character. You know, because when I was picking this game to play with old toy sets, I definitely thought ‘Can’t wait to smash armies with Star Bright, not He-Man’ (though there is a certain satisfaction to that). After finishing the Campaign and realizing there wasn’t any way to unlock them and I actually did have to pay to get them at all (or have purchased the Hall of Fame version), well, it seemed like a real dick move to me. Maybe I’m in the minority here, but keeping my ACTUAL childhood favourites out of my reach while toying with me with the second fiddle toys I used to have is definitely a dick move. Maybe the company that put its name and its biggest money making character into the game should be thinking about its image right now, not how to make me call them dicks in my review.

Anyway, this game is actually pretty good. I really loved battling through the various maps and tackling a pretty difficult campaign. On top of that, there are more than a few ways to replay it and one mode designed to have you checking in every day, which is something that isn’t outside of the realm of possibility given how much I liked it. However, some game mechanic issues and maxing out your armies, coupled with an undercover pay-to-play issue, keeps it from being a great investment. Regardless, if you’re old enough to remember playing with the toys found in this game, or you just want a good tower defense game to play, this is definitely one to check out!