In 2005 I had the chance to play brand new unknown IP at E3 that I had no idea would become the juggernaut of a franchise it has become.  Gears of War debuted at the annual media frenzy.  I still remember playing the multiplayer demo and I chain sawed my opponent for the first time.  The game was eventually released to the public in November 2006, to critical acclaim nonetheless.  This third person shooter went on to catch the attention of many gamers and has spawned a few sequels.  Epic Games was the original developer, but Microsoft has since bought the rights to the franchise and The Coalition is now at the helm and the ‘Gears’ franchise has finally arrived on the Xbox One with Gears of War: Ultimate Edition.  Microsoft is introducing the franchise with an improved version of the original game for those who may have not played it, and for those who played the original on the Xbox 360, the original has been rebuilt with new features to entice fans to play the game all over again; and yes, it is worth playing once again.

For those who have not played the original, Gears of War puts you in the role of Marcus Fenix, a disgraced COG (Coalition of Ordered Governments) soldier who has been given a second chance so to speak.  Humanity finds itself in a war with the Locust Horde, and as would be expected, a saviour is needed.  You eventually lead Delta Team on an all out battle against the Locust while learning more about Marcus and why he was put into a military prison.  All in all the story is fairly enjoyable and worth paying attention too for those who are new to the series.  One of the features of this ultimate edition is the addition of a new chapter not found in the console version of the game (it was added in the eventual PC release).  You play through 5 new campaign missions where Marcus and his squad battle towards Timgad Station and faceoff against one hell of an enemy.  It’s a nice addition and something returning fans will enjoy. 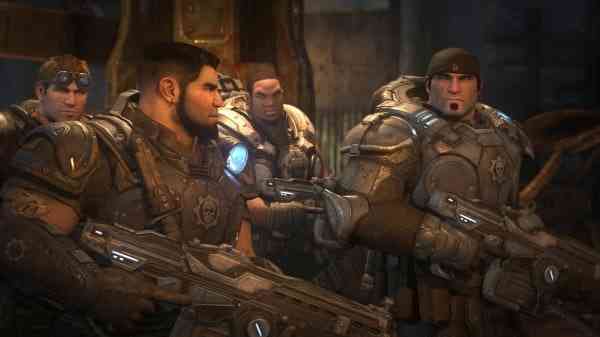 Most people, especially those who have played Gears of War before, may see the whole “Ultimate Edition” tag as way to say HD makeover.  Well this game is far from just an HD port of the original.  The game was torn down to its’ base and rebuilt for the Xbox One.  It is not just a game that is meant to look upscaled, as it’s a game that is fully optimized for the Xbox One, from the visuals, the sound, right down to the gameplay mechanics.  A lot of work went into what I believe makes this game almost something new, not just an HD port.

Gameplay wise, Gears of War now feels more like a modern day shooter then a 2006 game that was ported over.  You’ll find that the control is smoother and that the checkpoint system has been improved so you don’t feel like you are going on forever before you reach one.  I found myself smiling as I ducked between cover points with what felt like a bit more ease then when playing on the Xbox 360.  Sure, there are a few ‘original’ hiccups, like getting snagged on some geometry now and then, but it is not as prevalent as before, and it feels more like a game of today.  The cooperative campaign experience is also modernized, as you can “drop in/drop out” at any time.  No more having to load the game, have your friend join, and then start the level.  There is also split-screen support for cooperative as well, where each player can have his or her own difficulty settings.  Other additions such as being able to revive teammates while in cover, being able to toggle your weapons while roadie running, and improved sensitivity customization for your controls, have been added.  All these changes are make for a better feeling and better controlling game.

“The game has been rebuilt from the ground up and is truly an Xbox One title that should be enjoyed, from the single player campaign to the multiplayer mayhem that it offers.”

One of the biggest changes outside of the single player campaign comes in the form of the totally revamped multiplayer.  I have to say that this is definitely not the multiplayer game that first hit the Xbox 360 in 2006.  First off, there are a total of 19 maps for you to get your PvP groove on.  These maps have been totally reworked in the visual area.  As well, with the improvements in gameplay control, as well as the new 60fps that the multiplayer is locked in at, you have a PvP experience that has been brought up to modern day standards.  4v4 Gears PvP has never been more enjoyable.  The game just feels so much better you literally have to experience it to understand.  There are also an additional 2 slots in multiplayer for a spectator mode; this is on top of the 8 that are allocated for regular players.  There is also a new 2v2 mode with shotguns only, which plays on a totally reimagined War Machine map.  PvP fans will also be happy to know that dedicated servers are featured, and that there is also full support for LAN play.  This is quite the treat for those looking to shoot, stomp and chainsaw their friends during some multiplayer madness.

Given that the ultimate edition is a remake of the original game, the visuals and sound have received a complete overhaul, and I do mean complete.  Both the single player and the multiplayer are 1080p, true HD, not upscaled.  The single player campaign runs at 30fps and, as mentioned earlier, the PvP runs at 60fps.  The game has been totally rebuilt and the visuals are quite notable.  When I first started the game I thought I saw a crack in the seam of the level, but when I walked up to what I thought I saw, I realized it was actually broken glass on the floor that was reflecting light.  Right from that point I realized the details of the visuals as the textures, lighting, explosions and all the game’s special effects have indeed been rebuilt.  The cinematic cutscenes have also been redone with all new motion capturing and character modelling.  It’s quite stunning to see.  The upgrade in the rebuilt graphics are also evident in the multiplayer maps too, and as you can see in the gallery below with the Xbox 360 vs. Xbox One screenshots of the PvP maps, the differences are striking.  The audio has also received some major upgrades too.  All the sound is in 7.1 surround sound, so if you are using a slick set of headphones, or you are in a home theatre setting, you’re going to hear every sound around you, from the Locust flanking you to the sound of a Gnasher shotgun blasting in any direction, it all pretty solid and adds to the overall experience. 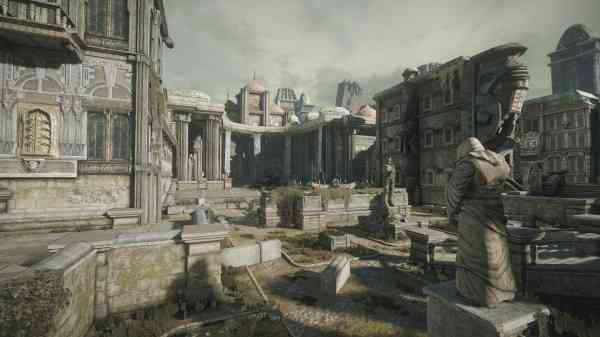 There is still more to entice all the Xbox One owners to pick up this game.  First off, there are 1250 achievement points for those ‘cheevo-hunters’ out there, and a lot of them are brand new.  Also, should you pick up a copy of the game you also get early access to the Gears 4 Beta when it is released, something Gears fans will appreciate.  There are also five Gears of War digital comic books that you can unlock and read as you play the game.  This adds a bit more lore to the world of Gears of War and is a nice touch.  Finally, a really neat feature that was recently announced is that when you purchase the ultimate edition you get all of the Gears of War Xbox 360 games via the Xbox One backwards compatibility feature.  For those who have been with Gears since day one, this is a nice walk down memory lane should you wish, but for those who haven’t played any of the games, this is a great way to catch up in the series.

When Gears of War: Ultimate Edition was first announced I was sceptical, but after learning more about it at E3, and having played the final retail code, I am truly impressed.  The game has been rebuilt from the ground up and is truly an Xbox One title that should be enjoyed, from the single player campaign to the multiplayer mayhem that it offers.  All the added bonuses from the digital comics, the 5 added campaign missions, to the original Xbox 360 games being included in this package using the Xbox One’s backwards compatibility, are just the cherry on top of the icing.  Gears fans, as well as those new to the series, will be satisfied with this “Ultimate Edition” offers, as it’s way more then just an HD remake.