As a kid I, like many people (I assume), wished that I could conduct my very own train. But honestly, I wished I could do a lot of things back then at one time or another – be a garbageman, a fireman, even a park ranger at one point. And that was based in large part on my childish ignorance of how unexciting those jobs would have actually been had I been forced to spend hours and days doing them. I was reminded of this cold hard truth while playing Train Sim World, now out on PC and consoles. Like lots of job-sims, it’s a pretty detailed and authentic-feeling simulation of what is, frankly, a boring occupation. As such, it’s unfortunately not a fun game.

Starting out, Train Sim World seems to teach you pretty well all the various things you need to know to drive your train. Similar to Bus Simulator 18, you face a console with myriad buttons and switches that need to be attended to in order to roll out of the station. Brakes, throttles, reversers, releases, power buttons, switches and a host of others are shown to you during the Tutorial, before you graduate to your own train and placed in a series of train-related scenarios. So far so good right?

But design issues begin to show themselves right away. In my first scenario, I was tasked with getting my train full of passengers to their destination on time. I was told to “open the doors,” but I did not know how to do this, and I had not been shown how during the Tutorial. None of the console buttons controlled the doors, and I wasted a lot of time trying to figure it out. Only by looking it up online did I finally learn that Tab was the button to open and close the doors. It’s great that Train Sim World gets you started driving quickly, but I soon found out that there was some crucial information I wasn’t told. But even if I did know all the controls it wouldn’t have mattered, because the basic game is just too one-dimensional.

Train Sim World does give you a fair bit of content for your buck – a wide variety of scenarios give you a comprehensive experience in almost every train-related aspect, as you deliver freight, make schedules on time, and even ride as a passenger at times through locales that include New York and London among others. The problem is, the scenarios just aren’t very interesting. Meeting objectives that include not going too fast don’t exactly get my blood pumping with excitement. Train Sim World’s accuracy actually makes things worse – trust me, 15 minutes of real-time train travel through mundane urban landscapes will be enough to make you quickly re-think that childhood wish to be a train conductor. 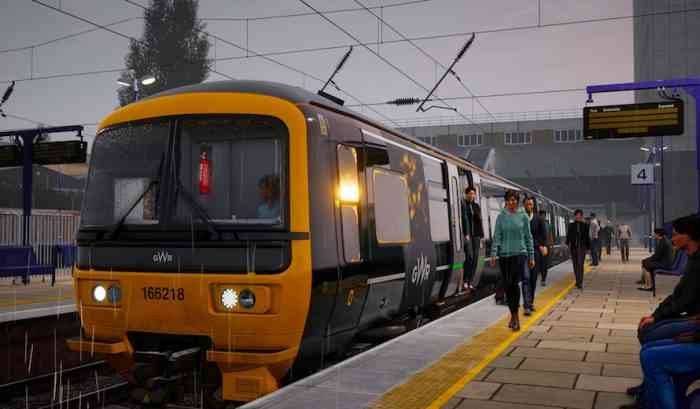 The most accurate term I can apply to Train Sim World‘s player experience is tedium. In fact, I swear that Developers Dovetail Games almost seem to take relish in rubbing in the monotony of train life, right down to the tiniest pointless detail. For example, you are often made to take long walks to merely get into your train, and then sit for 10 or more minutes, in real time, until your scheduled departure time. And then as a driver, there is really jack squat for you to do after you start going, limiting your “gameplay” to looking out at dull cityscapes or maybe changing the train’s speed slightly – be still my beating heart…

Visually, it’s a decent-looking and even polished game, with train models that look very detailed and accurate. And the environments you roll through have a realistic appearance. But there is also a sterility to it all that adds to the boredom. The cities seem lifeless, uninhabited, like perfect but empty models. Likewise, your trains are populated by robotic mannequins rather than people, much like I found with Bus Simulator 18. Whether you’re driving the train or riding as a passenger, it doesn’t really matter because in both roles you’re mostly staring out the window at the same, dreary scenes.

In my recent review of Bus Simulator 18, I lamented that at the end of the day, driving a bus just wasn’t fun enough to make for a good game. Well, imagine we took even that dull experience and made it even duller – because now you’re stuck on a railway track, sitting and looking out the windshield without even the limited excitement of steering. And that is the basic problem with Train Sim World; it delivers what it promises – a depressingly-realistic simulation of utterly boring inter-urban train transportation. And I’m sure if Dovetail Games ever decides to make a Recycling Plant Simulator game, it will be equally as accurate a recreation of the many facets of the waste management business – I just hope to God I never have to play it.