Anyone who has relied on public transit for daily transportation knows we have a love/hate relationship with bus drivers. When they arrive on time and take us to work or that key job interview, they’re our angelic saviours; but when they’re a few minutes late, we curse them and the beaded seats they comfortably ride on. Now Bus Simulator 18 has pulled up to the curb offering us transit-jockeys a rare chance to steer that giant wheel from the driver’s point of view, and players soon learn that the job isn’t quite as easy as we might have thought it was.

There’s apparently a lot of little things you have to do when you drive a public transit bus, and Bus Simulator 18 has clearly gone to great pains to replicate them all realistically. You’ve got to manage the lights (exterior and interior), front and rear doors, a ticket machine, wheelchair ramps, and a bunch of other distractions, all while driving at a nice, comfortable speed and making every stop in a reasonable time. It’s a lot to juggle, and I will say that developers Stillalive Studios do a good job training you with a solid Tutorial when you begin.

Bus Simulator 18 also paces your experience well, slowly ramping up your myriad responsibilities as you gradually transition into an RPG-like career, building a fledgling bus company from humble beginnings to industry leader. EXP is earned as you successfully complete routes and earn upgrades including unlocking more stops, hiring new drivers, getting new paint color schemes and other features. Money is also earned which allows you to buy new and better buses and grow your “fleet” into a transit empire to be reckoned with.

It all adds up to a surprisingly multi-layered experience, allowing you to live a realistic bus-driving (and owning) career that incorporates more aspects than the simple driving of a bus that you might have expected. There’s even the option to drive in different weather conditions or design your own bus route if you wish – almost every facet of the transit operator’s experience is there if you’re looking for it, and that’s impressive. The physics are also well-done – for example, your big, heavy bus takes a while to speed up with the W button, and stopping with S also involves a gradual slowing-down as befits such a massive vehicle. 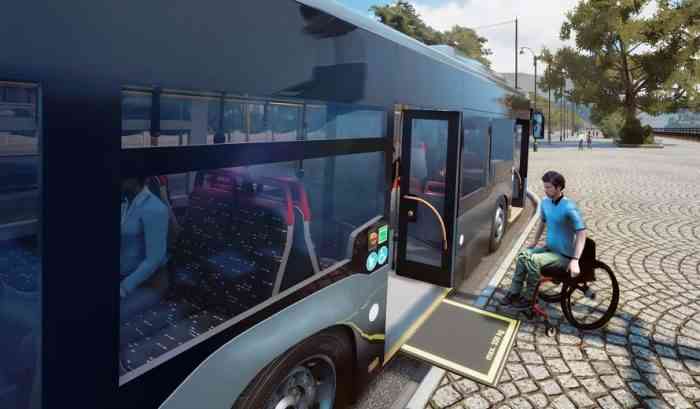 The game’s visuals come courtesy of the Unreal 4 engine, and I’d say they are solid but uninspired. There’s a high level of realism to the models and city environments with minimal bugs, clipping or collision-detection issues (flaws I have found in other Simulator games). The models, however, feel very basic and boring – especially the people who ride your bus. NPCs get on and off awkwardly, moving like robots, and their faces look last-gen with no discernible range of expression. Many are even exact duplicates, and I encountered many instances of as may as three identical characters boarding my bus, all in a row. Their voiced banter, which includes repetitive or even unrelated comments, also does little to enhance the realism of the experience.

In the end, despite all of the extra customization, RPG elements and other details, Bus Simulator 18 still gets to be boring after a few hours. Once I mastered the basics of driving, and all of the dashboard buttons, and grew my bus business, the novelty wore off and I was faced with the cold reality that I was still just a schnook driving a bus most of the time. Although I do find Bus Simulator to have a lot more to keep me interested than Farming Simulator – including a decent multiplayer mode, it’s still just not enough to counterbalance the banality of the core experience long-term. When all is said and done, it might be too accurate of a simulation, and not enough of a fun game. Fans of these kinds of simulation titles – or those whose lifelong dream is to be a bus driver – will dig Bus Simulator 18. For others, the initial fun will fade and this will be a short ride.