It was almost a decade ago when teenage me first picked up Red Faction: Guerrilla and spent hours just knocking holes in buildings, largely forgetting the story. Now, nine years later, not that much has changed. The destruction in Red Faction: Guerrilla Re-Mars-tered is still incredibly fun, but it seems the rest of the game had been forgotten about for a reason.

In Red Faction: Guerrilla Re-Mars-tered you play as Alec Mason, a miner who goes to Mars to start a new life with his brother. Alec comes across the Red Faction, a group of rebels who plan to overthrow the oppressive Earth Defence Force (EDF) and take Mars for themselves. The Red Faction make good use of Alec and puts his abilities of blowing up veins of ore to good use by having him blow up whole buildings instead. For the first few missions of the game, I was having fun playing through the story as I went around Mars destroying anything with an EDF logo slapped on it, and teaming up with my fellow guerrillas to help overthrow EDF bases, which I then blew up.

In the following missions, however, Guerrilla grinds to a halt as it turns you away from the Red Faction’s acts of terrorism and has you focused more on the gun-play instead of the actual fun parts of the game. The story itself isn’t anything inspiring, with boring dialogue and forgettable missions. It seems my teenage-self was onto something by doing just enough story missions to unlock the cool weapons and then forgetting them entirely to blow more things up.

Red Faction: Guerrilla Re-Mars-tered starts off on the right foot by thrusting you into the action almost immediately. You have to play through a brief tutorial, then you’re handed your trusty sledgehammer, some explosives, and you’re free to topple over buildings like a space-age lumberjack. Few things are as satisfying as using your sledgehammer to tear a hole in a tall silo, then watching its supports buckle and topple into a building full of enemies, crushing the entire building and anyone unlucky enough to be deployed there that day. 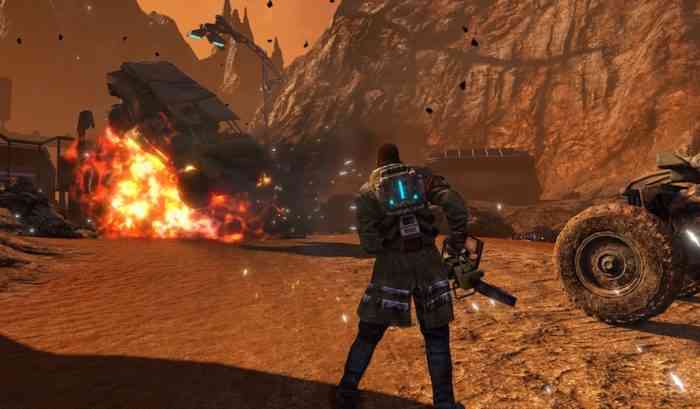 Being one of the main selling features of the game, the destruction was handled very well and is an absolute blast to mess around with. It also works in more ways than one, however, as it also pairs up quite nicely with the upgrading system. To upgrade anything in this game you need scrap metal, which you can get from practically anything you blow up, knock down, topple over, or disintegrate. Go on a demolition spree and you’ll have enough scrap to hold more satchel bomb charges, or a more powerful rocket launcher, to demolish even more things. It ties in very nicely and is one of the things that Red Faction: Guerrilla Re-Mars-tered does right.

However, for me, while the destruction was one of the best parts of the whole game, combat was more of a chore than anything else – which is a damn shame as it would have been able to tie in nicely with the destruction element. Blowing a hole in a wall to destroy the enemy’s cover would have been great if the bullets had any visceral impact.

I found that even the sledgehammer felt more satisfying than the bland gun-play that Guerrilla has. It just felt like sinking little bullets into a sponge, whereas the sledgehammer felt, and is, powerful enough to send an enemy flying across the room with every hit. To fix this, I often skipped gun-play altogether, and just completely leveled whatever building the enemy dudes were standing in. If there was no building to blow up, I’d simply fire a rocket launcher at their feet and be done with them. It really did feel like a chore to do anything in combat other than blowing things up, and it really makes me appreciate combat in other games much more. 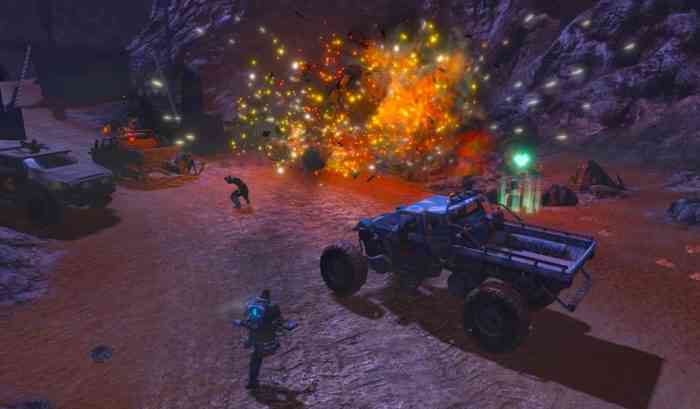 The other saving grace for Red Faction: Guerrilla Re-Mars-tered is multiplayer. It has plenty of online modes that utilize the fun of destruction, the non-stop mayhem of PvP, and the high-tech weapons/gadgets that Guerrilla has to offer. Game modes range from regular deathmatches to a ‘Siege’ game mode where one of two teams must defend a group of buildings, whilst the attacking team tries to destroy it all. Guerrilla also has some side-missions that tie in nicely with the destruction and make for a fantastic break from the story. Whether I had to blow up a building within a time limit or destroy something in a certain way, the side-missions were a saving grace from when I was sick and tired of the boring shooting.

A Pretty But Empty Open World

For a re-mars-ter, the graphics are obviously quite pretty, but this seems to be the only thing they added in this remake (barring the included DLC). There’s nothing new for veterans of the game to explore, no new missions, and worst of all is the lack of new things to blow up on Mars.

Speaking of which, the giant open world of Mars is very true to what a real terraforming of Mars would look like – empty, with not much to do on the surface and not many people walking around. Unlike GTA or any other open-world games, the world I had to explore was bland and empty. Driving around was the most practical way to get anywhere, but the controls for driving made sure it wasn’t the fastest. Though I had no issues with the other controls, I found that not being able to change my camera’s sensitivity in the car was a real pain in the ass, especially during missions. Usually, it wouldn’t be a complaint, but since this is a giant, open-world game you’ll find yourself driving quite a lot.

Red Faction: Guerrilla was one of my favorite games in childhood, but after playing through it with fresh eyes I’m able to see the issues I didn’t pick up as a kid: the story isn’t memorable, the combat is lackluster, and the large open world isn’t full of many interesting things to do. However, I do still thoroughly enjoy blowing stuff up, knocking stuff down, ramming vehicles through a building’s foundations, and collapsing a bridge with EDF forces driving over it … do I have a problem?


THQ Nordic Sale on Steam – This Weekend Only

Get the Most out of August’s Games with Gold in Bayonetta
Next Captain Toad: Treasure Tracker Switch Review – A Wii U Port Done Right
Previous Bus Simulator 18 Review – Driving a Bus Isn’t As Exciting As It Sounds