Total Tank Simulator does not quite live up to its name, and it may be a bit misleading even. Nevertheless, the final product was a pleasant surprise. Rather than being a game totally about tanks (it’s not, it has much more than that), Total Tank Simulator also lets you in on the action if you so choose, as one of many military units. The game is perhaps best described as a physics-based WWII strategy simulation.

Total Tank Simulator features three main modes: Campaign, Sandbox, and Shadow Mode. The Campaign Mode features the “story” portion of the game, allowing you to choose between different factions to guide through World War II. In reality, there really is not much of a story, and the factions play differently based on their strengths. Throughout the campaign mode, you are faced with different missions ranging from Deathmatch, VIP modes (both kill and protect), and Wave Defense. By completing these missions, you can spend your winnings on upgrades to your armies as you progress through the campaign.

Sandbox Mode is pretty much what you would expect, allowing you to create scenarios as you see fit. Shadow Mode is an interesting addition, pitting you against your armies from previous battles that have won. It is important to note that besides placing your army onto the battlefield and pressing start, you can take control of your units and control them in battle. Overall, Total Tank Simulator allows you to play how you want.

Tanks for the Lesson

If you decide to hop right into Total Tank Simulator, you may have some issues getting started. Luckily, the game features a pretty solid Tutorial Mode that teaches you the controls, how to get set up for battle, and how to interact during combat as well. The gameplay loop features a set up phase in which you decide which units you want to place at which location, followed by combat in which you can simply watch from a variety of angles or take control of a unit and fight alongside your troops.

The strategy for the game is deceptive. The first few missions within the campaign can be completed relatively easily by simply placing your troops and hitting start. It does start to get harder, and strategy soon begins to matter. Specifically, players will have to take into account strategic points on the map, the environment, enemy units, and enemy positioning rather than simply what units to deploy. While simply setting up units and watching the madness unfold is enjoyable, the strategy portion of the game gives it a second breath. 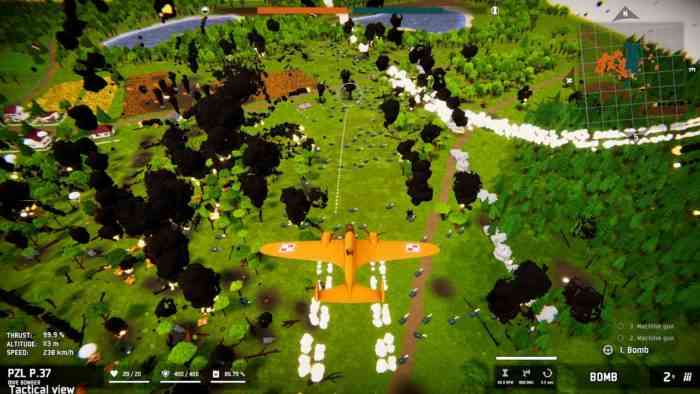 The controls for the game were pretty intuitive and what you would expect from a strategy game. If need be, you can utilize on-screen buttons on the left of your screen for the various choices as well. Perhaps expectedly, the game does not control as well while you are in direct control of a unit. While switching between weapons and utilizing the guns worked fine for the most part, navigation became an issue, especially as random objects began to block your movement. However, this does not detract from the overall experience as I consider taking control of a unit to be more of an addition to the package.

The game’s graphics are not that great, featuring mostly a polygonal design. However, the game’s ability to put as many in-game units as it does onto one of fifty maps at any given moment is still great to see. Likewise, the game’s audio does the job, and I found that the sound effects of guns and bullets whizzing by to be solid audio cues as well.

Overall, Total Tank Simulator is a decent package for simulation fans who want to sit back and watch the magic happen. For those who would rather be on the front lines, you can do that here as well, just don’t expect the same experience as you would from a dedicated FPS. While deceptively simple at the outset, Total Tank Simulator is much deeper than what you might expect.

Total Tank Simulator Cranks Up The Physics Next Year