Tiny Metal is a turn-based strategy game in which you command your units across a map to either capture the enemy’s command center or complete the secondary objectives. The secondary objectives usually revolve around killing all enemy units on the map or capturing several cities. Each unit begins its turn by choosing to either move or stand still, after which they can perform situational actions. The primary actions are: capture, attack, assault, and focus fire.

Capture is used if the enemy is on a building tile or factory —  that’s useful, as more cities means more income, and more factories means more units. Attack is self-explanatory. Assault pushes the enemy back a square. Focus fire allows multiple units to attack the same target. Those last 2 commands are very important. After you attack an enemy, they return fire. With assault, which is used to interrupt units capturing a location, the defenders get to attack first. Focus fire gives you the chance to eliminate a unit before it can attack back or attack it with a unit that would not survive the counter hit. Your unit’s damage and capture rate if they are infantry are linked to their health, so pick your battles carefully. The more battles your units survive the more EXP they get and the deadlier they become. There are also Hero units that help by capturing special buildings. Unlike normal units, Hero units retain their EXP between missions, making them formidable after some investment. 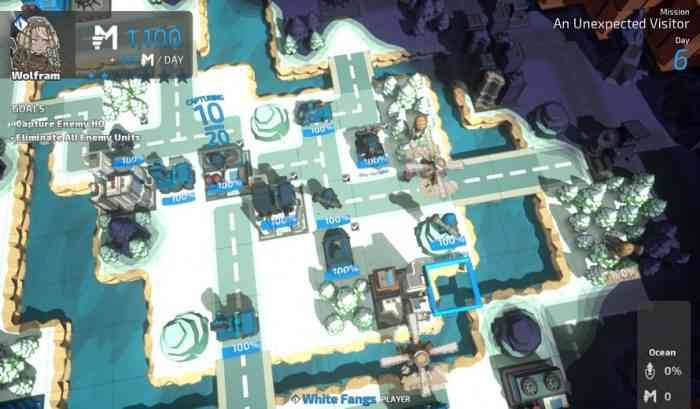 Playing through the campaign really felt like I was playing a modern version of Advance Wars. Each unit felt like it had a clear purpose and the combat, while simple, had enough depth to allow for strategy. The Hero units were fun to use and rewarding to track down. I would recommend setting combat to ‘Quick’ in the options, as while the fight scenes between units are cool they get old after a while and this change saves a decent amount of time. While the gameplay was solid, I found that the story did not really draw me in.

Besides the campaign there are also skirmishes and multiplayer. The skirmishes are vs the AI and can be unlocked through the shop. Now I know what you are thinking but don’t worry, the store uses in-game currency that is earned by completing missions — no microtransactions. I found the skirmishes to be more challenging than the earlier segments of the story. The scenarios were also unique and were a great way to get a feel for all the units before you unlocked them through the story.

The multiplayer was much like the campaign but with more freedom to choose your commander which you cannot do during the campaign. This is important as every commander has a passive and two skills. The passive is a buff to a unit type or a weaker general buff; for example all units may cost less but be weaker or all mechs may be cheaper and have better defense. The powers need to be charged and have a normal and supercharged version. Wolfram, for instance, can increase her infantry attack and building capture rate. One feature I was really hoping would be carried over from Advance Wars was local multiplayer, but I was a little disappointed to find only online multiplayer, especially on the Switch. The online multiplayer itself was fine, and I did not find myself lagging or having trouble getting into a game. No General felt overpowered or overly annoying to fight based on their bonus stats.

Tiny Metal: Full Metal Rumble is a great improvement on its predecessor Tiny Metal. If you like Tiny Metal or Advance Wars you will likely enjoy Full Metal. The price of $18.89 CAD for this game is a good deal if you are a fan of the genre. There was plenty of content both in the campaign and through the skirmish mode. The character models were well done with an overall pleasant art style. All things considered, this is a solid turn-based strategy game that builds well on the previous game.

Genshin Impact Devs Tease What to Expect From Next Update
Next Logitech G Pro X Review – Xtreme PROformance For The Price
Previous The Church in the Darkness Review – Storytelling, Stealth, and Cultists