The Church in the Darkness Review – Storytelling, Stealth, and Cultists

The Church in the Darkness Review

“Vic, I’m out of options. Alex has been in South America two years now and I haven’t heard from him in six months. I just know something is wrong and I don’t trust the horrible preachers he’s fallen in with. Can you get in there and check on him? With your background I know you can handle it. Get him out if things look bad. I know it’s been a few years, but you’re family. God, he’s still just a kid. – Stella”

The desperate plea of a mother is what kick starts “The Church in the Darkness”, a peculiar game about infiltrating a religious cult in a South American jungle in the late 1970s. Stella is worried sick for her son and she hasn’t got much of choice, so, as her brother, you’re her best bet to make sure he’s alive and well. Thus begins your mission to get in, find your nephew Alex, and get out (with or without him).

Some time ago, Alex became a member of the Collective Justice Mission. This was a cult established in 1967 led by the charismatic leaders, Isaac and Rebecca Walker, who preach a gospel of integration, equality, and socialism. Whatever took place in the United States, the cult eventually moved their 500 persons congregation to the secluded Freedom Town. Now, ten years later, it’s up to you to investigate it.

That’s the setup for the game’s story and, as you’ll see, its narrative mechanics are full of intricacies. However, when it comes to the actual action-infiltration mechanics, The Church in the Darkness is pretty straightforward. This is a top-down game which requires players to traverse the large map of Freedom Town several times in order to find specific characters, search for items and documents, evade guards (or fight them), and exfiltrate.

Whenever you meet a friendly member of the cult, a simple dialogue interface appears. However, you won’t find branching dialogues in The Church in the Darkness. It’s all about having a direct conversation, understanding their motives and how to help them. This is done by finding documents and letters scattered around camp which serve as proof of the true nature of Freedom Town and its leaders’ intentions. If a character has relevant information to present (such as Alex’s location) your map will be updated and point to the area where you should head.

Being an action-infiltration game, you have the option of knocking out or killing both civilians and guards. You can also use tools to deactivate alarms and, if need be, employ firearms. Should you subdue or kill someone, you can also hide their bodies to avoid detection. In fact, characters react accordingly if you’re armed and even if they know you’ve killed others. Witnessing the world react to your decisions feels great.

Guards and civilians detect you when you step into their field of vision (represented by the classic field of vision cones) and if you don’t make it out in time, they’ll either attack or activate an alarm. The downside is you need to enter sneaking mode (which is very slow) to see their vision cones, and forgetting to do this often leads to accidentally being spotted. As you can guess, activating the alarm leads to more guards and means almost certain death. 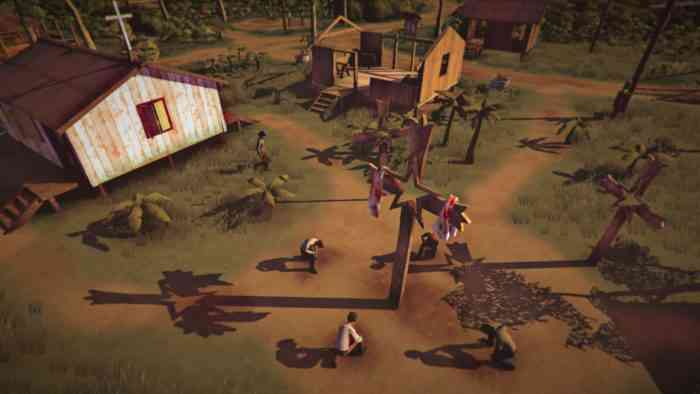 For that matter, I mostly played as a non-violent infiltrator, yet not exactly by choice. After a couple sessions, I decided to only infiltrate unarmed because of the clunky combat mechanics. Unfortunately, the aiming controls in The Church in the Darkness are not smooth and once you engage in a firefight, your chances of dying are quite high. One might think it adds to the realism, but it just makes the experience quite frustrating because the top-down camera makes it hard to understand your surroundings. It was quite bothersome to fail at least three times because my character got stuck to a small object I couldn’t see – sometimes a tree, other times a chair. You need the zoomed-out camera to properly survey the area, but zooming in is the only way to identify the scenario details. It’s tricky.

To make matters worse, if you die, you have to restart the mission. This makes sense given the narrative concept and mechanics of the game, but it certainly feels frustrating to lose your mission progress in a pathetic manner after investing so much time and exploring Freedom Town’s corners. After that, prepare to wait for a somewhat long loading screen until the new mission is ready.

The plus side of this mechanic is that every “infiltration mission” you successfully complete has its own ending. The epilogue is a direct combination of your choices and the personalities of the cult leaders. This is a result of the game’s core which provides a highly replayable experience. If you play it once, you’ll only witness one of the possible versions of Isaac, Rebecca, and the cult.

As an example, in one session I was captured and the leaders came to speak to me as their prisoner. On other playthroughs, I spoke to the leaders and found out they had vile intentions towards each other. On another, I presented evidence to members of the cult and convinced them to leave. Finally, during other attempts, I escaped with Alex, let him stay, or died trying.

Every time you play, the personalities of characters change and you live a different story. In fact, whenever you reach the end of a mission (successfully or not), the game asks if you’d like to replay with (a) random preacher personalities; (b) the same personalities you just played; or (c) personalities you haven’t reached an ending with yet. The game’s ending screen does a great job of showing all the possibilities that await you and provides more information regarding the circumstances of each ending you’ve achieved.

To convey its narrative, The Church in the Darkness has a notable cast of writers and voice actors. The game is directed by Richard Rouse III, who previously led development on The Suffering franchise and features contributions from other renowned writers such as Steve Meretzky (Mind Forever Voyaging), Marc Laidlaw (Half-Life), Brenda Romero (Train), Brian Moriarty (Loom), and Chris Avellone (Planescape: Torment). All of this adds to a great diversity of styles coming from the different characters in the game with their own backstories and motivations.

When it comes to the voices of Isaac and Rebecca, the real-life husband and wife stars Ellen McLain (GLaDOS in Portal) and John Patrick Lowrie (the Sniper from Team Fortress 2), bring the leaders of the Collective Justice Mission to life with distinct personalities. You’ll always hear their voices coming from the town’s PA system sharing their dogma, beliefs and even making references to real world historical and political events. It’s believable to the point where you could picture a cult like this might have existed during the Cold War.

It’s also slightly annoying that sometimes I couldn’t hear a character with whom I was talking to because the PA was so loud, and drowned out the dialogue. An in-game sound menu with the different channels could have solved this.

In sum, The Church in the Darkness is a highly replayable game with shifting gameplay goals for each playthrough. The dynamic narrative that changes the motives of the cult leaders leads encourages players to give it another go, make new choices and achieve new endings. You’ll have to endure its technical mishaps, but if you get past those, you’ll have fun investigating the diverse versions of this mysterious cult.